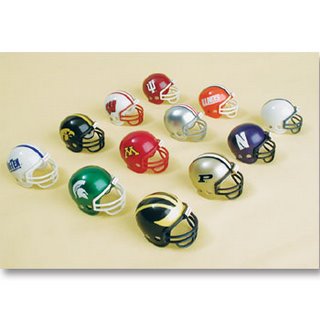 After seeing yesterday’s college football results I realize that I should probably stick to covering the Big Ten. At the end of the week’s preview I went on a diatribe about Alabama, and specifically coach Nick Saban, being overrated. The Crimson Tide crushed Clemson, and officially shut me up from saying anything about the man again.

As far as the Big Ten goes, Things went almost exactly as planned. Only Michigan, Michigan State, and Illinois went down to defeat. Those were defeats that were somewhat expected, even mildly in Michigan’s case. The other seven games were the blowouts that we expected.Teams that weren’t supposed to have problems with their opponents did not. Teams that were expected to have some problems did. The glaring exception was Minnesota, which pulled out its game, but will likely continue to have defensive issues. Perhaps the worst thing is that The Big Ten went 0-2 in its biggest games this week, further weakening the stature of the conference at large.
There’s no real change in the power rankings this week. This is mostly because there isn’t enough evidence yet to necessitate a change. There will be after next week when there are some better games and Purdue finally joins the party. What follows is a quick wrap up of each team in order of its original ranking.


Ohio State 43, Youngstown State 0 – The goal of these games is obviously just to keep everyone healthy. Ohio State probably was not going to lose unless it committed about 15 turnovers and generally played the worst game in its history. As a result, they simply wanted to avoid injury. Since the story of the game was Beanie Wells getting hurt that is a fail.


Wells looked impressive from what little he played, but if it is indeed turf toe/Lisfranc/a sprain it is the kind of nagging injury that can derail a season. The Buckeyes face another near certain win this week, so it may be best to rest him before the showdown with USC (which looked awfully good on the road against a team with a pulse). Like many games yesterday, this one simply went as expected aside from Wells’ injury.


Wisconsin 38, Akron 17 – This was likely a little too close for comfort with it only being 17-10 at the half. As we were driving toward Wrigley Field yesterday (a small benefit of Purdue not playing, I must say) my wife was checking scores and I was surprised to see it so close in the fourth quarter. Wisconsin’s depth, experience, and talent took over in this one and made it the expected margin by the end.


Akron had no answer for P.J. Hill. That’s not a surprise considering that few teams will have an answer for him this season. The running game as a whole generated 404 yards. That’s just a staggering number. 75 passing yards from Allan Evridge is far from a concern if they can keep putting up numbers like that, but more balance will be necessary. Still, if a team can find a way to slow down Wisconsin on the ground they have a chance. I am incredibly thankful that is a question we won’t have to answer until 2009.


California 38, Michigan State 31 – I am not surprised that Michigan State lost. It’s hard to begin the season with such a long road trip. Traditionally Big Ten teams struggle when they go on the road to face the Pac-10 early in the season. The last time I think a Big Ten team won such a game was our win at Arizona in 2005 and Ohio State at Washington last year. What is a concern is that Javon Ringer and the vaunted running game did so little. Ringer did find the end zone twice, but had to work hard for his 81 yards with 27 carries.

Brian Hoyer also had the type of game that fans hate to see: a ton of passing yards but not a lot of production. Of course, two of those drives were ended by Ringer TD runs, so it wasn’t a total wash. Spartan fans have to be concerned that the defense gave up a lead early and just couldn’t quite get the one stop it needed to turn things around. Cal did a good job of keeping the lead comfortable throughout. Michigan State is one of the conference’s best teams, but they still have a couple of steps to go.

Penn State 66, Coastal Carolina 10 – Everyone expected a blowout, but probably not of this caliber. Everyone got in on the act for the Nittany Lions, including a peanut vendor, a Make-a-Wish Foundation kid, and four cheerleaders if you look at the box score. Like Ohio State’s win, it’s hard to take much else from this one because of the margin. At least for a week Paterno pulls even with Bowden in the battle to see who blinks first. Since Florida State has not one, but two 1-AA opponents this year I think it is an unfair advantage.

Purdue 457, Dreaded Bye Week 3 – We had another good scrimmage on Friday afternoon. Coach Tiller also seems to think the defense will be very good. I agree with him, but because Northern Colorado is quite punchless I don’t expect to find out for myself for another two weeks when Oregon comes to town.

Speaking of Oregon, once we got settled into our hotel last night I was able to watch a good portion of their game against Washington. The first thing of note was that Justin Roper did not play much at all after getting banged up in the first half. Washington had it close for awhile, but they were unable to offer any protection for Jake Locker against Oregon’s pass rush. Three quarterbacks ended up playing, and all three are dangerous on the ground. Running back Jeremiah Johnson looked especially imposing with 124 yards and two scores.

This was a close game (14-10 at the half) that Washington let get away late with 30 unanswered points in the second half. I don’t know if it was a case of Oregon being that good, or Washington’s defense being that bad. Honestly, it was probably a little of both. The Duck defense did a very good job of containing Locker, but he doesn’t have as many weapons as Painter. They face a meek Utah State team next week, so they won’t have another good opponent until they face us. We’ll need to be ready to face multiple speedy quarterbacks.

Northwestern 30, Syracuse 10 – The Wildcats passed their toughest test of the non-conference season, but that is not saying much. Their preseason schedule makes Indiana’s seem rough. At least the Hoosiers are playing two really good MAC teams. Northwestern has four godawful teams to open against. The Wildcats actually trailed in the second half of this one, but went to the ground game like Wisconsin to dominate behind Tyrell Sutton.

Getting Sutton to the 100 yard mark in each game will be critical to Northwestern’s success. If he does that, the Wildcats have the balance that good teams need in order to win. Look at Michigan State this week. They had over 300 yards passing but didn’t hit 100 yards rushing and lost. If you can generate about even numbers in each phase of the game it makes things much easier. Northwestern did that yesterday and won comfortably.

Missouri 52, Illinois 42 – The Illini are clearly not ready, at least nationally. They have an offense that can do a little bit of everything, but their much talked-about defense didn’t even slow down Chase Daniel. If you have a good defense you should at least be able to force a Heisman candidate like Daniel work for his yardage. Illinois did not do so. For good measure they also surrendered a kickoff and interception returns for scores.

Missouri achieved the balance mentioned above and won going away. Illinois only gained 17 fewer yards, but barely gained anything on the ground by comparison. A ton of passing yards don’t equal wins. Just ask Drew Brees in against Wisconsin in 1998 and Brady Quinn against Purdue in 2004. Illinois’ defense failed it on this day.


Utah 25, Michigan 23 – I found this very interesting perspective on the Utah-Michigan game through CFN. Essentially, it states that Most of Michigan’s points came off of mistakes that Utah made. They are the types of mistakes that Michigan won’t get, at least in terms of total volume, the rest of the year. Teams will play sharper as the season goes on. The Big Ten is also better than the Mountain West, meaning better athletes will also factor in.


I still like Michigan to win their other three non-conference games. Despite everything, the Wolverines do not lose games against the MAC. That means Toledo and Miami should be wins. I still also favor them against Notre Dame, though it could be as big of a cripple fight as last year. I can’t help but think the Wolverines will have trouble, however, when they meet the better defenses of the Big Ten.


Indiana 31, Western Kentucky 13 – I know it was only a game against a team that’s not quite Division 1-A, but Kellen Lewis looked awfully good yesterday. Like Antwaan Randle El a few years ago, the Hoosiers are a much better, and more dangerous, team than they have been in a long time. I refuse to join my Purdue brethren that continues to cut them down. This is a good football team that can use this season to springboard into a very promising future. If we’re not careful, they will pass us.

Indiana has taken that critical next step where it is learning to dominate the games they should win. It used to be they would struggle somewhat, but still beat these types of opponents. Now they are learning to take care of business early, which is a very necessary skill if you’re going to become a good football team. They still must develop a ground game outside of Lewis, but if they do they will be dangerous.

Minnesota 31, Northern Illinois 27 – I was surprised that Minnesota had so much trouble with the Huskies, but the 10 game losing streak is at least officially history. They cannot be happy that Bowling Green took out a ranked Pittsburgh team on the road, but I am sure Gopher fans are happy to have any win after last season.

Still, the story was the same. The defense gave up an alarming number of big plays to an opponent that is nowhere near the talent level that the Gophers will face the rest of the year. Northern Illinois scored three touchdowns from farther than 50 yards. Two of those came as Minnesota already held a lead, a rarity in itself from last year. This is not a good sign for the future of the season.

Iowa 46, Maine 3 – This is another incomplete game, as any marginally good Big Ten team should beat a 1-AA opponent by a similar margin. Iowa continues to do what I hate, and that is not settle on a quarterback and stick with him. The dual quarterback system, unless you’re Florida, NEVER works. You might win a few games with it, but in the end it is more likely that you won’t have a ton of success. Nothing really stands out from this one.


Since this is another team that has the perfect schedule to build some confidence. Florida International will provide better competition next week, but not a lot better. We likely won’t have a full handle on iow until the end of the non-conference season.