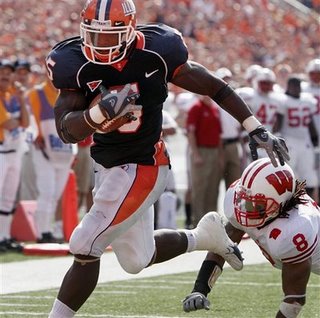 Since I’ve hit two years here I think I will start a new feature. This came about from seeing it on other blogs and seeing its success when I tried it during the NCAA tournament. On game day mornings I will post an open thread entry and open up the comments section for live game discussion. I’ll only be able to participate for some of the road games, but I am going to work on trying to comment from my phone in Ross-Ade. I figure I have an Env2, so I might as well use it. We’ll see how things go next week against Northern Colorado.

Purdue is off this week in a brilliant stroke of planning that gives us our bye week in week one. I’m not sure why the schedule was made out this way, especially when we were looking to move the Central Michigan game to another year and pick up a different opponent. Couldn’t we play someone else this week and move Central Michigan a few years down the road after playing them twice last year? Everyone else is active in the Big Ten, so we’ll get a good week of scouting done before we even start. Thanks to my ongoing war with Brighthouse I won’t be able to watch most of the games unless the promised end of the war comes through. ESPN360 became a last minute option tonight, but it’s highly annoying to watch football with the game freezing every five seconds.

The Big Ten is infamous for almost everyone playing at least one game against the MAC. This year there are probably a record low number of games between the two conferences. Only 12 times will a Big Ten team face a MAC opponent. Indiana, Michigan, and Minnesota account for half of those games as they each face two MAC opponents. Two MAC opponents (Central Michigan and Ohio) face two Big Ten teams each as well. These games have gotten more competitive recently, but this one likely won’t be.

Akron has fallen back a bit after winning the MAC in 2005 (giving us maybe our best win of the past four years in the process). They aren’t expected to contend in a competitive East division, while Wisconsin is a dark horse national title contender. The Badgers traditionally open strong, and new quarterback Allan Evridge should have plenty of time to get in sync here. I expect the Badgers to win big. The MAC will get a Big Ten team, but not here.

This is easily the game of the week in the Big Ten and, if not for USC-Ohio State in a few weeks, would be the biggest non-conference game. These two teams played a pretty good game to open last season before anyone knew how good they were. Illinois ended up in the Rose Bowl while Missouri was only beaten by Oklahoma twice and probably should have been in the BCS. If not for the 2 team per conference limit they would have been. The Tigers have a Heisman candidate in Chase Daniel and are once again one of the better teams in the country.

Illinois has plenty to prove after the thumping it took in the Rose Bowl. Losing their best offensive and defensive players will not help either. The Juice was much better a season ago, but he needs to continue cutting down on turnovers and finding his receivers. In my season preview I said that Illinois was overrated. If they manage to win this game I will officially retract that statement and they will become a legitimate threat to win the conference. That would be good for the conference profile as a whole.

The Hilltoppers have traditionally been a power in Division 1-AA but are in the middle of a move up in weight class. Next season they will become eligible for postseason play and can compete for the Sun Belt title. Because of that they are in limbo a bit. They are playing essentially for pride this season as they build for the future. Under those circumstances, there is nothing more they would like to do than scare the crap out of a BCS conference program.

Since Indiana finally made the postseason a year ago they have clearly raised their program a couple of steps. Still, they are viewed as a Big Ten team that non-conference opponents expect to have a better chance against than a Michigan or Ohio State. Western Kentucky was 7-5 last season in their first transitional year. I expect the Hoosiers to win this one easily, but Western Kentucky is capable of scaring them for a quarter or two.

The Black Bears are not one of the better 1-AA teams out there. Even if they were, there is absolutely no excuse for Iowa to lose this game. It was embarrassing enough that The Big Ten lost three games to 1-AA opponents last year. That needs to end now. Iowa needs this game to work on its offense, and that is what it will do.

This is another game that has the potential to be very, very good on the opening weekend. This kicks off the unofficial Big Ten/Pac-10 challenge as the two conferences meet in four pretty big games during the non-conference season. A Spartan win in Berkeley would open the door to a pretty successful season in East Lansing. They have enough returning starters to make it a memorable season as well.

The Golden Bears are a lot like Michigan State historically. They have been right there on the verge of a breakthrough for some time, but it has yet to happen. They always have a slight edge in recruiting because of location, but have yet to have everything click for them. They are one of those teams that could use a win over a good Michigan State team to compete in the Pac 10. Right now I would give them the edge because they are at home, but don’t be surprised it Michigan State makes a statement by taking this one. Either way it will be close.

This game is on the upset watch for a number of reasons. Utah has a very experienced, explosive offense that could give the Wolverines fits. The questions surrounding the Wolverine offense are well documented as well. You can be assured that 10 other teams in the conference will watch this game very closely. If Michigan struggles, it will be blood in the water for everyone else. The Utes are more than capable of pulling this one off, but it will be difficult considering that defense will be Michigan’s strength this year.

Michigan is the team we have struggled the most against in Big Ten play. I am envious when anyone else has success against them, especially in Ann Arbor, because no matter what we do we can’t seem to ever even compete with them. The Utes can. This is far from an easy opener for the Rodriguez era. Another season opening loss will quickly erase the goodwill he has earned.

The Gophers couldn’t ask for a better opener if they are going to break their long losing streak. The Huskies we at the bottom of the MAC a season ago, and they are not expected to compete this year either. The Gophers have lost 10 in a row, but pride and improvement dictate that the streak shouldn’t reach 11.

This will be our first look at a defense that is still very young and wide open. Every starting position is still up for grabs. A number of JuCo transfers should help the unit out. If not, teams will continue to score at will on them and even Northern Illinois could make this one exciting.

Early last season the Orange appeared to have turned the corner with a shocking win at Louisville. As it turns out, the Cardinals simply weren’t that good and Syracuse was as bad as ever. It seems like the Orange are slowly trying to invade the Big Ten. They have faced Iowa and Illinois each of the last two years, while this season they pick up Northwestern and Penn State. This will be the Wildcats’ most difficult non-conference game, but that is not saying much.

Syracuse lately is about as bad as it gets for a BCS conference team. Only Duke, who is also on Northwestern’s schedule, has been worse in recent seasons. Many Purdue fans remember the 51-0 waxing that we handed the Orange to start the 2004 season. They are a program that desperately needs to turn things around, but this year doesn’t look like it. If Northwestern gets out of this one, and they should, expect a 4-0 start.

Ohio State could play its third string and still name its score. The suspensions won’t matter except for the fact that the returning players may be a little rusty by the time the Buckeyes head to L.A. to face USC.

Coastal Carolina has two things going for it: A cool nickname (The Chanticleers) and the fact they are becoming a college baseball power. Neither of those will help as JoePa begins maybe his final pursuit of Bobby Bowden. Penn State will win easily.

I think this is the battle of who is the most overrated. I can’t believe Clemson is ranked 9th in the preseason, so this will be a chance to prove that they deserve that lofty ranking. Nick Saban is just the most overrated coach in college football. He has a history of losing leads late and having his teams lose games they shouldn’t. Yes, he won a title at LSU, but that team was ready built for him and a trained Labrador retreiver could have won the title with that LSU team. I still remember him from his Michigan State days where there Spartans blew back to back wins against Purdue. Who can forget last year’s "Pearl Harbor" loss to Louisiana-Monroe. Bear Bryant had to be rolling in his grave at that one, as a historical program like Alabama should never lose a game like that.

Based on the fact alone that Saban is coaching I like Clemson.

This is one of the better games in an otherwise watered-down opening weekend. Who can blame most BCS teams for scheduling a Northern Colorado in order to guarantee a good start. Pac-10 teams aren’t afforded that luxury, as many of them must be ready early. This game will also be of interest to Purdue fans, as we want to get a good look at Oregon with Justin Roper at quarterback after Nick Costa was lost for the season.

As for Washington, they have been terrible since falling apart in the 2002 Sun Bowl against us. Most of America is hoping they get it together when they face Notre Dame later on, and with Jake Locker at quarterback they have a chance in a lot of games. I like Oregon at home where they are nearly unbeatable, but this could be interesting if they struggle.