Share All sharing options for: Know thy Team 2008: Running Backs 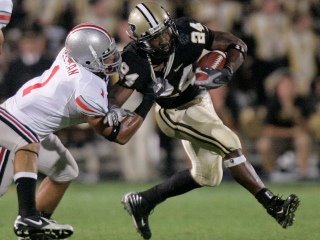 Much like having a senior quarterback, Purdue has had most of its success under coach Tiller when it has had multiple options in the backfield. Tiller’s 1997 had a dynamic duo of Edwin Watson and Kendall Matthews (thanks for the correction). 1998 had J. Crabtree and my former high school classmate Dondre Johnson (whose career was unfortunately cut way too short due to injury. He could have been fantastic). The Rose Bowl team had Montrell Lowe nearly rush for 1,000 yards (in the Indiana game alone) and Steve Ennis as the short yardage specialist. Brandon Jones and Jerod Void had lots of success for three years together, giving way to our current duo of Kory Sheets and Jaycen Taylor.

The running game has always been a bit of an afterthought at Purdue because of how much we pass, but it’s not completely non-existent like it is in places like Texas Tech and Hawaii. It still means a lot to our success. Generally, if Purdue can rush for 100 yards as a team it has a good shot at winning. If we get to 200, we usually have to beat ourselves in order to lose. The group of ballcarriers we have this year is good enough to give us at least 150 yards per game, and if they do we will have an excellent shot each time.

Taylor is currently listed as the starter, but I am considering them to be co-starters because they will likely split the carries evenly. Both have been around the program forever and have put up some quality numbers. In terms of career records, Sheets has found the end zone 37 times and is poised to break Mike Alstott’s career touchdown record with just six more scores. Considering he has gotten into the end zone at least 10 times in each of his first three seasons (the first of which he was fighting for playing time with Void and Jones) I think the record is as good as his.

Sheets was considered a big-time recruit when he came to West Lafayette, but one could only consider his career a slight disappointment for two reasons. The first of which is the emergence of Taylor. Jaycen has played so well the past two seasons that he has earned the playing time he has gotten. Those carries had to come from somewhere, and they came from Sheets after it appeared he was going to be "the Man" beginning in 2006. The second reason is Kory’s fault, and that is fumbles. It is somewhat ironic that Sheets’ first score of what will shortly be his record breaking tally came off of a loose ball in his first game (a blocked punt he recovered for a TD), because he has had issues with putting the ball on the turf ever since.

Sheets has made it a point to improve on this in the past, but results have been varied. He wants 1,000 yards this season and has again made it a point to work on fumbles in order to get there. Even if he is successful this time he may struggle to get there because Taylor will play a lot. I do hope Kory can avoid the drops enough to get the touchdowns record, however. I saw what happened to Lowe in 2002 when fumbles prematurely sent him to the bench as a senior and ended his career on a major down note. For his career he has rushed for 2,210 yards and 32 touchdowns on the ground. The school record of 3,635 yards by Alstott is probably out of reach (Sheets would be close to the single season record of 1,436 if he did it), but the 39 rushing touchdown record isn’t.

Sheets is also a bit more of a pass catcher out of the backfield with 71 catches, 561 yards receiving and four scores in his career. He is actually had the second most receptions of returning players with 30 catches for 216 yards and two scores. He has also been a big play threat with a big TD run against Michigan State last year, a long catch and run for a score in that game, and a career-long 88 yard run at Minnesota in 2005.

Taylor has the speed to be a big play threat as well. He’s slightly smaller than Sheets, therefore making Kory the more likely goal line back. He rarely if ever loses yards on a carry though. His first year at Purdue in 2006 saw Taylor not have a carry for negative yardage until the bowl game against Maryland. Last season he lost just 16 yards total and ran for 560 and four TD’s in nine games. His recovery from a broken arm against Central Michigan (the first game) was amazing, as he missed just four games. With both guys healthy Purdue’s offense is truly a dual threat offense. I think a reasonable goal is to have the pair combine for 1,600 yards and 15 scores this year. While many teams we face will have one featured back we can wear down we have two that can keep each other fresh. I like that.

Taylor came in as a lightly regard JuCo transfer from LA Harbor College two years ago expecting to compete for Sheets’ backup spot with Dario Camacho. Since then, he has rushed for 1,237 yards and eight touchdowns. He has also caught 37 passes for 326 yards and a score in his Purdue career. Taylor’s toughness despite his size is one of his most admirable traits. He very rarely loses yards. He plays when banged up, and does the little things. He’s a pretty good blocker, and even blocked a punt at Indiana last year.

The broken record refrain for the past few offseasons is that Purdue is going to use more two-back sets with a lead blocker. It has yet to happen. We have used a fullback so little that I am starting to have nightmares when we do use it. In the 2006 game at Hawaii the Boilers took over at their own 10 and went on a length of the field march that saw us overcome a pair of 10 yard penalties to reach the two yard line. After 108 yards of offense we lined up in the I-formation, only to pitch the ball off the fullback’s thigh. Hawaii recovered the fumble, and we got nothing for one of the best drives we have ever had.

Because of disasters like that, it often seems like we go away from using a fullback for games a time. Tiller wants to use more of the fullback again, however, and Halliburton looks to figure into those plans. Halliburton had 11 carries for 26 yards and even got a touchdown at Michigan last year. He’s big at 6’3" 251, so if we want to use him we can. Crank was recruited solely as a fullback and redshirted last year. At the very least these two will probably get some carries late in the Northern Colorado game when we’re up by about 5 scores.

Crank was recruited exclusively as a fullback, and spent last season as a redshirt. Crank had 18 touchdowns in his senior season at American Heritage High in Richardson, Texas. He also played linebacker, meaning a move could be in his future eventually if a need is seen on the other side of the ball.

Dierking is the son of Purdue legend Scott Dierking and impressed many, including me, by winning the #3 job as a true freshman last year. The first time he touched the ball in the opener against Toledo he stumbled 30 yards for a touchdown against a demoralized Rocket defense. Most of his yards and both scores came against Toledo and Eastern Illinois in blowouts, but he did finish with 181 yards on the season. He even started at Michigan when Taylor was hurt and played extensively after Sheets was benched following a fumble. I honestly thought it would take a redshirt year before he saw the field, but the former Illinois Gatorade player of the year acquitted himself well when we needed him while Taylor was hurt. Because he got to play so much he provides depth in case of injury again, and that will only help in 2009 when he will take on a much larger role. Dierking was also a standout on special teams with 11 tackles.

Harris obviously didn’t play last year as a redshirt, but I have heard good things about his speed and playmaking ability. I expect to see him play in the season opening blowout of Northern Colorado when everyone who will play at least once this season gets some PT. Until then I can’t really say much about him as I don’t know a whole lot. Harris did rush for a school record 4,856 yards at Patterson Catholic High in New Jersey, and was one of the top 20 running backs in the 2006 recruiting class. What we don’t see of him this year we will see in 2009

Bolden and Evans are incoming freshman who have some promise, but battled some injuries in their final year of high school. Bolden in particular had a rough year, as a torn ACL in the state playoffs back home in Georgia limited him. He may play some as a true freshman, but I doubt it with the depth ahead of him. There has also been talk of moving him to the defense. Bolden also played in high school with cornerback David Pender, linebacker DeVarro Greaves, and new wide receiver D.J. Donley. That posse won state championships in Georgia in 2006 and 2007.

Evans had a much better junior year before stepping back as a senior. He stated that nagging injuries and being the focus of opposing defenses limited his output at Portage high in Northwest Indiana. As a junior he had over 1,600 yard rushing, but was limited to around 800 yards last year. He is also a redshirt candidate unless injuries force him into a larger role. By 2010, however, we could be seeing a lot of him, Harris and Bolden in tandem with then-senior Dierking.