Share All sharing options for: Know thy Opponent Takeover 2008: SpartyMSU 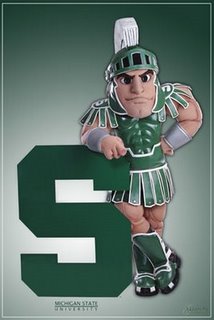 The takeover series continues this week as yet another member of the Big Ten Blogging network stops by to take over Off the Tracks. Today’s guest is the renowned Michigan State blogger SpartyMSU. Aside from being a fellow hater of all things Irish, He is about as passionate as they come when concerning all things Spartan. Sparty seems pretty excited that Michigan State could be the surprise team of the Big ten in 2008. Let’s hear what he has to say.

Off the Tracks: Expectations are high in East Lansing, but there are several key positions that must be replaced. How will this affect the season, especially after lowing the top two receivers and Caulcrick?

SpartyMSU: Yes, expectations are High, but realistic… True, we lost some fantastic athletes, but there are some great players in place and ones recently committed to the Spartans for the future. The Cupboard is looking good!

Caulcrick had a Huge Career, This year the focus is on Jovan Ringer (Arguably one of or the best Back in the Big Ten except maybe for Wells at OSU), in Tandem (Possibly) there’s A.J. Jimmerson. He was used sparingly last year (only 12 attempts) but he is a solid Back and will most likely share time with Ringer… There is also Ashton Leggett.. 5"11" – 205 Lbs, Andre Anderson 5"9" 190. Many ways to keep Ringer fresh, and the Opposition "D" guessing.

Hoyer is one of the Best QBs in the Big Ten, has a target rich environment whether rushing or putting it in the air. Hoyer is the Field General. He has developed into the Leader we need.

OTT: Purdue and Michigan State have played some very entertaining games since Tiller came to West Lafayette. Why have the Spartans struggled so much to put away the Boilers?

SMSU: Series is pretty much tied, but Spartans holds a 1 game margin at 30 – 29 - 3…. Last years game I didn’t attend. I missed going to Ross-Ade and Bistro 501 / Nine Irish Brothers/ etc., always have a good time in Lafayette. You do have some fun Night Spots. (Ed Note: thank you! I know from my senior year I have hazy memories of them)

As For the 2007 Game I Believe Tiller got out coached, clear and simple.Successful Fake Field Goal, Successful Fake Punt, Purdue Offsides on a missed Field Goal (Subsequent Mulligan Swenson made), Painters Pass Fumble that was taken in for a TD by Key. (Ed Note: It's probably the worst game we've played in awhile.) Bottom line is the teams were well matched last year. I think Dantonio made the difference. Of course, with all due respect to Boilermaker Ledged Joe Tiller.

But Frankly, and it hurts to say, the Spartans have had some BAD coaching and leadership for many years. It fostered a culture of not finishing games due to the leadership and lack of discipline. Except for Saint Duffy, George Perles (soon to be Canonized), Sabin (Dick and Traitor), and now Mark Dantonio (Gospel According to Mark), we had some poor Coaches.

The culture of not finishing is GONE. Successful Step One of the Dantonio Era. The Rise of the Spartan Nation is Upon us !!!!

OTT: On defense, Michigan State got a ton of guys to the quarterback. Can we expect more of the same despite losing Saint-Dic and Baldwin.

SMSU: Look out baby, Pain Train is coming. Rockem–Sockem football is back in East Lansing. The "D" is my favorite side of the ball, and it will only get better in the coming years (Based upon Dantonio’s leadership, Dantonio’s Plans and the Recruits pledging to be Spartans).

DE Jonal Saint-Dic had a Fantastic Year in 2007. Wow, he was fun to watch. But now it’s 2008. with MLB Greg Jones leading the crew. LB Eric Gordon with CB Kendal Clark-Davis, SS Otis (My Man… ) Wiley, Johnny Adams, DT Justin Kershaw, Freshman Steve Gardiner, Freshman DE Tyler Hoover 6 ‘7" – 265Lbs (and FAST !) , and DE Trevor Anderson 6’2" – 250 (All Big East Player) who followed Dantonio from Cinci. This is the Strongest "D" and "DL" in Years… Yeah, Spartans will be in the backfield. The QBs will be hearing footsteps all day long. Can’t wait to see how soon the opposition QBs get gun shy.

Spartans have the tools to plug the any hole created by guys departing. This group will be much improved from last year.

OTT: This one is for my own curiosity. What's the deal with the Notre Dame game? Why can't either team win at home lately in the MSU-ND series?

SMSU: Damn. If there is one team I dislike almost as scUM, it’s the Domers. (Ed Note: Who doesn't?) And I remember the Promise that Tubby Chucky Weis made to a Boosters Group in 2006: "Never to lose to Michigan State again under my watch" … I want to see that Ginormous Tub of Goo eat those words again and again and again.

Spartans have made 6 trips to South Bend, 6 Straight Victories. Haven’t lost there since 1993. I think we should rename it Spartan Stadium South? Or how about Sparty Complex Annex? Or how about MSU South Bend?

But, your correct Sir, losing at home is a problem. The issue for the Spartans was in finishing games. Like in 2006. We all sat through that frick’en hurricane type weather. We were leading 37 – 21 going into the fourth. What the hell happened? None of us can pick out where the wheels came off. But, the issue probably was John L’s coaching and the culture of not taking personal responsibility for yourself and your team mates. The lack of self discipline. The lack of playing four Full Quarters..

Those days are done!!!

OTT: How much has Dantonio changed the culture in East Lansing? How important was it that Michigan State avoided the tailspin last year?

SMSU: The Culture is 180 degrees different. A unified team, supportive fanbase, alumni, and students. It's wonderful to see EVERYONE behind the coaches and their leadership and the steps forward. No tail spin. Dantonio was the reason for this… PERIOD!

The lack of Tail Spin was one of the evidences of the strategy and changes being implemented in East Lansing. from focused team discipline, focus on family and faith, team respect, restoration of the pre-game walk, to the coin tossing at Sparty, to the dress code, to the focus on position fundamentals daily, the unified run onto the field , lots of little things are adding up.

After years of self-implosion it is nice to see the Spartans changing under the positive value driven tutelage of the new leadership and coaching. Sure ,steps forward periodically have steps back, but the trend is upward and the plan is long term…

I’ll Drink to that!

OTT: Finally, I am planning on coming up for the game. What can fellow Purdue fans expect when they visit East Lansing?

SMSU: Besides a Boilermaker loss on the football field and besides getting some fun verbal harassment from each of the Bars you visit, East Lansing is a diverse and fun town to visit. Many bars and restaurants (My Favorites: El Azteco, Peanut Barrel, Crunchy’s, Lou – and Harry’s, The Land Shark, P.T. O'Malley's, etc. ). Great tail gates, too. There is a Marriott Hotel downtown staggering distance from all the night spots. The more the Merrier. Cheers!

SPARTY ON Boilermakers !!!
Can’t wait for the season to begin !!!

Sparty on indeed. I’m looking forward to adding East Lansing to my road trips list, and good luck the rest of the season.