Share All sharing options for: Know thy Opponent takeover 2008: The Hoosier Report 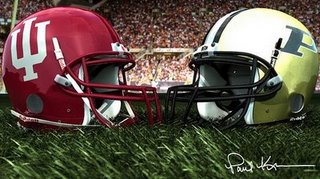 Tonight we close the Know thy Opponent takeover series as John from the Hoosier Report stops by to answer some questions on our rivals to the south. First, a couple of quick hits that probably can’t wait until Boilermakings next week:

That brings us to John. The Hoosiers are in a unique position to get back to the postseason and begin to establish a better program. John agrees that this is an important year for the program as a whole, so let’s take a look at what he has to say.

Off the Tracks: 2007 was finally the breakthrough that Indiana needed. now with the stadium expansion and everything else, IU football is on the rise. Can the Hoosiers maintain the momentum and become a regular postseason visitor?

The Hoosier Report: Well, that's always the hope. In the era of 85 scholarships, 12 game schedules, and dozens of bowl games, there's no reason that IU or any other BCS conference school shouldn't be able to win at least some of the time. Of course, there are a number of variables. Is Bill Lynch the guy from his middle years at Ball State, or the guy from the rest of his career? Can he recruit with strong programs on all sides--Illinois, Purdue, and Kentucky are all in good shape, not to mention the traditional powers in or adjacent to Indiana? As you note, the stadium expansion should help in several respects. So, I think we're in good shape. But I'm a Cub fan, so I'm used to optimism in the face of a daunting historical record. (Ed. note: I agree with you here, but this is the year for the Cubs!)

OTT: The Hep factor was obviosuly pretty big last year, but James Hardy had a big say in things as well. Who is going to step up and catch passes now that he has gone?

THP: One bit of good news that hopefully I will have mentioned on the blog by the time you post this is that Andrew Means, who currently is playing rookie ball in the Cincinnati Reds' system, will return for his junior season. Means was second on the team in yards last season (559), although he didn't catch a touchdown despite a decent 11.6 yards per reception. Ray Fisher was third in receiving yards and caught four touchdowns. Brandon Walker-Roby hasn't yet lived up to the standard set by his older brother Courtney, but he has one more opportunity to make an impact. In addition to Hardy, IU lost James Bailey for what appear to have been disciplinary or academic reasons. Marcus Thigpen has never established himself as an excellent running back, but he is a threat as a receiver: 181 yards and 3 touchdowns receiving last year. It's unclear which freshmen will contribute, of course.

OTT: Coach Hep made it a point to recruit for both the offensive and defensive lines. With players like Greg MIddleton it is obviously beginning to pay off. How central will both areas be to Indiana's success in 2008?

THP: I think both will be important, mainly because line play is important for every football team, but also because of IU's specific areas of vulnerability. On offense, as you note, James Hardy is IU's biggest loss, so IU establishing a traditional running game and pass protection will be particularly important. On defense, nearly all of the front seven return, but IU lost starting corners Tracy Porter and Leslie Majors. If the defensive line can stop the run and put pressure on opposing quarterbacks, that will take some heat off of an inevitable young secondary.

OTT: Is Kellen Lewis more of a threat than Antwaan Randle El was? How will his recent suspension affect things for this year?

THP: I consider them different players. I would describe Lewis as a pass-first quarterback who also can run. Randle El was a great runner who also could throw the ball. I have so much regard for Randle El that I'm not willing to put Lewis in his class until I see what happens this season, without Hardy and following the suspension. As for how the suspension will affect things, I'm not sure we will know right away. According to Bill Lynch, Lewis will have to compete with Ben Chappell for the starting job. While I expect Lewis to recover, IU has tweaked the offense and will be going with a no-huddle attack, so Lewis will have some catching up to do. Fortunately, IU's schedule is fairly easy at the beginning, with I-AA Murray State and I-A newcomer Western Kentucky in the first two weeks, followed by a bye. So he has time to catch up.

OTT: Historically, when Purdue has been up Indiana has been down and vice versa. Did last year's bucket game signal a swing of the pendulum or is it possible for both to be successful at the same time?

THP: Your historical assessment may be generous to IU. There have been plenty of times that both schools have been bad. Still, what you say has been the case for the last 25-30 years. The Mallory era corresponds with Purdue's worst run of the last several decades, and Joe Tiller arrived just as IU's program was descending into the crapper. It's impossible for either IU or Purdue to win with only Indiana recruits. While both schools should focus on the home state as much as possible, both schools also have to recruit out-of-state to win. Because of that, I don't see any reason why both schools can't be as good as Purdue has been during the Tiller era, for example, at the same time. It would be nice if the Bucket game represented a swing of the pendulum, but there are enough questions about the state of both programs that it's impossible to tell. (Ed. note: I agree, but I would also like to see the Bucket Game mean more nationally.)

OTT: How excited are you for the expansion at Memorial Stadium? Do you expect Indiana to have a more level playing field now in the Big Ten?

THP: I am excited about it. The expansion will help in a number of respects. It will result in a substantial upgrade in the off-the-field facilities, such as the weight room and player lounge, items that are very important for recruiting. The new luxury seating will help revenue. Perhaps most importantly, the expanded stadium will project a much better image. The closed in end zone should put an end to the "high school stadium" cracks from a certain fanbase, and it should improve the atmosphere and volume. The idea of closing in the north end zone has been on the drawing board for years, and it's nice to finally see the steel and concrete in place.

OTT: Finally, how much of a lasting legacy do you expect coach Hoeppner will have in Bloomington? Personally, I have nothing but respect for the man and love that he took on what seemed like a hopeless challenge.

THP: For better or worse, Hoeppner's legacy is mostly in the hands of Bill Lynch. If Lynch has a successful career at IU, Hoeppner will justifiably be considered the foundation of the program. If someone else has to start over three or four years down the road, then it will be different. Unquestionably, Hoeppner's enthusiasm as a promoter and competence as a football coach started the revival of IU's football program, and he probably is the but-for cause fo the current construction in the north end zone. So, I suppose regardless of Lynch's career, Hoeppner's lasting legacy will have been an injection of enthusiasm and the stadium expansion. But Lynch's record will have much to do with Hep's legacy.

Thank for stopping by, John. I certainly respect the Hoosiers, but I speak for every Purdue fan when I say we look forward to the November 22nd return of the Bucket to West Lafayette.