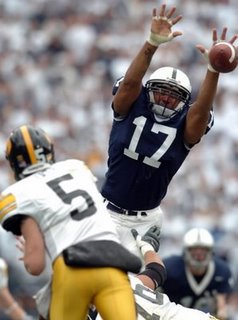 We are coming to you live from Wagener, South Carolina, the home of a mere 863 people including my grandparents. This recent foray in SEC/ACC country is not a fruitless search for the speed that every Big Ten team supposedly lacks, but a much needed visit to family. Due to the absolute wealth of opportunities for entertainment in a town like this, however, I simply cannot decide on what to do. Therefore, I can continue the Know thy Opponent series with our first conference game against Penn State.

Call me crazy, but I think making it to our conference season will actually make things easier for us. I think the Oregon-Central Michigan-Notre Dame stretch is a pretty brutal non-conference schedule, but at the same time it will toughen us to face a Big Ten that, in my opinion, is not that strong outside of Ohio State. I have long looked at the 2008 schedule thinking that only the Ohio State game would be an unwinnable game, but the Northern Colorado game is the only guaranteed win. When Penn State comes to town it could be the closest we come to a must-win game all season.

Last season for the Nittany Lions:

It wasn’t a championship year, but Penn State still had a pretty good season. They finished at .500 in the conference, but won all four non-conference games plus their bowl game for a 9-4 finish. Penn State played very well in Happy Valley, going 6-1 with a very good 38-7 win over Wisconsin, but the Lions struggled on the road. In five road games Penn State was just 2-3, losing to Michigan, Illinois, and Michigan State while struggling at Indiana. One could argue that all three games were ones that Penn State should have won. Each loss was by a touchdown or less. If one can look at a 9-4 finish with a bowl win and call it a frustrating season, the 2007 Penn State campaign would qualify.

Penn State struggled in big games last season, just not as much as Purdue. The one home loss was a 37-17 game against Ohio State that wasn’t really as close as the final score. Against Purdue, with a better bowl game on the line, the defense came through. They held the Boilers to four field goals instead of touchdowns, making the difference in a seven point win. Their best game was easily the Wisconsin game when P.J. Hill was held to 75 yards and a touchdown.

Though the Lions did go 5-0 outside the conference, only Texas A&M in the Alamo Bowl was an especially taxing opponent. This year’s non-conference schedule is tougher only because of the addition of a tricky Oregon State team. Syracuse is still awful, while Temple and Coastal Carolina shouldn’t pose any kind of a threat.

The Nittany Lions must find a new quarterback, but if you listen to the litany of Penn State bloggers in this network they were more than happy to let Anthony Morrelli go. Morrelli is just the latest example of a big name recruit not panning out. He had modestly good numbers of 2,651 yards to go with 19 touchdowns and 10 interceptions last year, but so much more was expected of him. In last week’s Q and A with Black Shoe Diaries Mike stated senior Daryll Clark and junior Pat Devlin were battling for the starting job. The two combined to complete 6 of 10 passes for 31 yards last season. Clark has been in the system a bit longer and is listed on the Penn State Rivals site as the starter, but both are expected to play. Clark is a bigger threat to run while Devlin is a better passer. Still, this will be the first Big Ten start for either. They must improve for the Nittany Lions to have a successful season.

Fortunately, there are plenty of returning players to help either Clark or Devlin develop. One of those key pieces is Evan Royster, who will be the key running back in more of a spread option offense that will harken back to the Michael Robinson days. Royster rushed for 513 yards last season with an impressive 6.3 yards per carry. Royster found the end zone five times as a redshirt freshman, with his best day coming against Purdue. In that game Royster had 126 yards and a touchdown for the only time he cracked the century mark all season. Mike also expects freshman Stephfon Green to play quite a bit. Green has speed to burn as a home run threat, but if Purdue’s run defense can come to play the Boilers might have a chance against an inexperienced quarterback.

The passing game will still be a threat because of a trio of senior receivers. Jordan Norwood, Derrick Williams, and Deon Butler all return as the top three receivers from last year. They combined for more than 1,500 yards, 150 catches, and 12 scores. This is what I wrote about the trio last season:

Last season Morelli threw for 2,424 yards and just 11 touchdowns. He struggled in big games, but had a pretty good bowl game against Tennessee. This year he is expected to have a much better year thanks to three fantastic receivers in Derrick Williams, Deon Butler, and Jordan Norwood. All three are juniors with speed to be deep threats, and the hands to be possession receivers as well. Oh yeah, they all have a ton of experience as juniors as well. This may be the sternest test our secondary will face all year, and the only reason I see for diminished production from all three of them is if Morelli has a bad year.

These three receivers have the ability to be great, but they will only be as good as the quarterback throwing them the ball. That quarterback should be very well protected behind an offensive line that has four seniors on it. Center A.Q. Shipley leads the group, but fellow upperclassmen Dennis Landolt, Gerald Cadogan, and Rich Ohrnberger all return. Cadogan and Landolt were the starting tackles last season on a pretty good unit. In reality, you couldn’t ask for a better situation in which to break in a new quarterback.

The biggest news on the other side of the football is, of course, the spring game loss of All-American linebacker Sean Lee. Penn State is Linebacker U. for a reason. They will be able to replace Lee’s production, but his leadership is what will be missed the most. Lee was part of the Penn State defense two years ago that no one else has done to a Joe Tiller coached team: shut out the Boilers. Purdue had a streak of 127 games without a shutout before that game, and the defense is good enough that they could do it again.

At linebacker Penn State has plenty of experience with two seniors and a junior. Josh Hull, Bani Gbadyu, and Tyrell Sales form the heart of the defense at linebacker. Sales saw action last season with Dan Connor and Lee, and looks to step forward from being caddy into a leadership role. Hull played in all 13 games last year as a reserve, as did Gbadyu. Everyone in the secondary except Justin King returns, but Mike noted that it may not necessarily be a good thing as they struggled last season. Still, Penn State gave up less than 18 points per game. Anthonoy Scirrotto led Penn State with three interceptions last year and is the second leading returning tackler behind cornerback Lydell Sargeant. Mark Rubin appears to be the other safety, which Mike described as a step slow.

On the defensive line junior Maurice Evans returns. Evans was only one of the top rush ends in the conference last season with 12.5 sacks, 21.5 tackles for loss, and five forced fumbles. He is a beast that our inexperienced tackles must contain against both the run and the pass. Josh Gaines will start on the other side while Abe Koroma and Ollie Ogbu will be the tackles. Neither started last season, but both ended up playing quite a bit. Both are also close to 300 pounds, meaning they will occupy some space in the middle of the line while the linebackers have the speed to cover the outside. In other words, it is your typical stout Penn State defense.

Placekicker Kevin Kelly returns as one of the most experienced kickers in the Big Ten. Kelly hit on 19 of 24 field goals last season. He is a three year starter and has made 58 field goals in his career. He has range from about 55 yards, giving Penn State a scoring chance any time they get inside the 40. Jeremy Boone also returns as the punter, and he boasted a 43 yard average per punt last season. The Nittany Lions may have the most experienced specialists in the league, and special teams is far from a weak link for them.
In the return game Penn State did not allow a punt return for a touchdown last season, giving up barely more than five yards per punt return. The kickoff team gave up a pair of touchdowns, including one to Dorien Bryant to start last year’s game.

This is where we talk about the elephant in the room. Off the field Penn State couldn’t have more distractions right now. The largest distraction, of course, is the ongoing situation of JoePa’s longevity. Paterno is easily the longest tenured coach in the league, with Joe Tiller a distant second. Still, there have been rumors and rumors of rumors all offseason concerning his health. He has worked out a deal to continue coaching on a year-by-year basis for as long as he wishes, but there is a strong belief that this will be his final season.

Penn State has had a number of off the field incidents in recent years. So many that another Penn State blog, Run Up the Score, has had to comment on the number of incidents that ESPN is talking about. At Purdue we don’t really have room to throw stones in this area, especially as long as Torri Williams is affiliated with the program. As Run up the Score states, many of these are incidents that could have been avoided with only a modicum of common sense. They are still distractions, however, and must be dealt with. It is far from known what role these will play on the season.

Penn State will be one of the most difficult defenses we will face this season. Their unit is on par with Oregon and Ohio State, and that is something we have not handled well in the past few years. To have a good season I think it is imperative that we get at least a split of the home games with Penn State and Michigan. Penn State’s offense could stall in a hurry as they work out their quarterback issues, giving us the opportunity to grab a win here if we can move against what will be a very good defense. Since we want that split we might as well go after this one. If we get it, we can then think about getting a sweep.

Whoever’s weakness is less will win this game. Penn State’s secondary and quarterback are its two largest weaknesses. Ours are our running defense (against a strength of Penn State’s running game), and our inexperience as receivers. If our defense has improved to the point where we come in here at least 3-1 I like our chances.

To this point I have predicted a 2-2 start with a pair of close losses. This game feels like it will go along the lines of the Oregon and Notre Dame games, and therefore really depends on how well we are playing at the time. If we get off to a slow start against the good teams on our schedule, we lose. Should we start the season well, we can win this game. Right now, I would give a very slight edge to Penn State. Penn State 20, Purdue 17