Share All sharing options for: Know thy Opponent Takeover 2008: Addicted to Quack 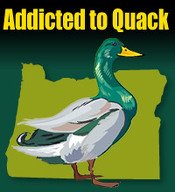 Since I cannot find a Northern Colorado blog we have our second opponent, the Oregon Ducks, taking over Off the Tracks for a new feature this year. The Ducks were in the driver’s seat for last season’s national title game before Heisman front-runner Dennis Dixon went down in a loss at Arizona. The Ducks appear to be a consensus top 25 team for 2008, but they have some questions to answer other than my pressing interrogation first. Here is what Dave from the noted Oregon blog Addicted to Quack had to say.

Off the Tracks: Oregon is certainly not afraid to pay the Big Ten, but the Ducks and Boilers have only played once before (a 13-7 Boiler win in West Lafayette on 9/29/1979). What are your thoughts on Oregon's history against the Big Ten and Purdue in general?

Addicted to Quack: Hard for me to say much about that 1979 game, as I was not yet born at that time.

But you're right about Oregon not being afraid to play Big Ten teams. Let’s take a look at the last ten years, which I think is a reasonable timeframe to go back. Oregon is 5-4 against the Big Ten during that time. They split home and homes with Michigan State (1998-99) and Wisconsin (2000-01). They also split a pair of Sun Bowls with Minnesota (1999, 2003). Inexplicably, they lost a home game to Indiana in '04. This game, which featured seven turnovers, was easily the worst played Duck game I have ever seen, and stands as our only non-conference home loss since 1994. And, of course, we swept a home and home with Michigan (2003, 2007). It is safe to say that in recent history, Oregon has done fair, though not spectacularly against the Big Ten. That the game is in West Lafayette should favor the Boilers, as the only Oregon road win in that time against a Big Ten team was the beat down last year in Ann Arbor.

OTT: No Dennis Dixon, No Johnathan Stewart. Those are two incredible talents, but I am seeing the Ducks as a consensus top 25 team. Who is replacing these two and what should we expect as they get used to the first team offense?

ATQ: Needless to say, those are some big shoes to fill. Let’s start with Stewart, because that is the easiest question to answer. Jonathan may be the best RB in the history of our school. He was a beast. That said, running back is a position we are loaded at. LeGarrette Blount, who was the #1 rated JUCO running back last year, had a monster spring camp. He's a 230 pound bruiser with a burst of speed (ed. Note: Oh Crap, we’re screwed). Bellotti compares him to former Duck running back (and current New York Giant) Reuben Droughns. We'll also get Jeremiah Johnson back. JJ is coming off a torn ACL (just one of nine billion injuries to hit the Ducks last year), but has been one of the most talented backs in the league the last couple of years. Bellotti often referred to Stewart as #1 and Johnson as #1A. JJ has tremendous speed and the most wicked stiff arm I have ever seen. Finally, we also have Andre Crenshaw, who averaged over 5 yards a carry last year. Even without Jonathan Stewart, there is no doubt in my mind that this is one of the top five backfields in the country. As as we return almost the whole offensive line, running the ball shouldn't be an issue (Ed. Note: especially against our D. Expect a 400 yard day).

Quarterback is a much tougher nut to crack. We're left with the task of trying to replace the best player in the country. It basically comes down to two players. Justin Roper was somewhat of a Sun Bowl hero, throwing four touchdown passes in his first college start. Nate Costa was seen as Dixon's heir apparent, before suffering an ACL tear of his own last year (if Costa didn't tear his ACL, the offense wouldn't have sputtered so much after Dennis' injury).

Costa couldn't practice last spring because of his rehab, and Roper failed to do enough to win the starting job. This will be a fall camp battle. My gut tells me that as long as Costa is completely healthy as, unlike Roper, he is a speed threat, which is very much needed in our spread offense. This will be a major step down from Dixon, but the great backfield is likely to help him a lot. I would expect that we'd be primarily a running team next season. A darn good one too. The key for the QB is going to be limiting turnovers, rather than making spectacular plays.

OTT: What are your honest aspirations for 2008? Many are already handing the Pac-10 crown to USC, but what chance do the Ducks have of making it to Pasadena?

ATQ: Next year is a tough year to honestly say we have a shot at winning the league title. Not so much because of the quarterback situation (because our run game is great, and our defense may be the best in the league), but because the schedule is so damn brutal. Of our nine conference games, five are on the road. And four of those are at USC, at Arizona State, at California, and at Oregon State. Other than us, those are the four best teams in the league. Our home games are against some of the worst teams in the league, such as Washington, Stanford, and Arizona. With that quartet of games on the road, even a very good team could easily lose three of them. It is easily the most brutal conference schedule in the nation next season. Our non-conference schedule is also difficult. In addition to the road game at Purdue, we also have a home game against Boise State. Only the Utah State game figures to be a likely gimme.

Mainly due to this schedule, I am cautious about our prospects this season. I think we will be a very good team. But even being very good could lead to 8-4 and fourth in the league. 9-3 and second or third in the league would leave me ecstatic.

OTT: Since the Pac-10 is one of the rare conferences to play nine conference games, what do the Ducks have to gain by traveling across the county to play a difficult game against a good BCS opponent?

ATQ: Oregon doesn't shy away from playing people. In the last decade, we have played Michigan, Michigan State, Wisconsin, Oklahoma, and now Purdue. The next few years, we play Tennessee, Georgia, Kansas State, and Colorado. Even the mid-major teams we play are usually the good ones; Fresno State five times in the last several years, many games against Utah, and Boise State this year. We only schedule 1-AA teams if someone bails on us at the last minute (I can only remember three such games since 1994). It is just part of the philosophy—we'll play anyone that will give us a game in return. And we'll build tradition by beating good teams. Its great exposure early in the season, and gives you a chance to establish yourself nationally from the get go (which is a must if you want to have a chance at a national championship or a BCS at-large on the left coast).

I suppose we could load up on 1-AA and MAC teams, but what do those games really do for you? Plus, they make for terrible football. We prefer to play football games against real teams, instead of glorified scrimmages.

OTT: Who on Purdue makes you afraid in this matchup? Who should Purdue be afraid of from Oregon?

ATQ: This probably isn't going to make me very popular in Purdue-land, but I haven't studied Purdue yet. In fact, in spite of how much college football I watched last year, I'm not sure I can name a single player on the Purdue roster. Please don't scorn me L. The Big Ten just wasn't very watchable last year (plus, most of their games are on so damn early on the West Coast. It is hard for me to be into a game at 9AM Saturday morning).

As for who Purdue should be scared of, it really comes down to two positions. The running backs have been talked about at length earlier. But the secondary is also very good. Patrick Chung may be the best safety Oregon has ever had, and is one of the hardest hitters in the nation. Cornerbacks Walter Thurmond III and Jairus Byrd are both interception machines and very good cover corners (Ed. Note: sounds like a fun test).

OTT: What can Purdue fans like me expect next season on the return trip to Autzen?

ATQ: Autzen is a great environment. The fans are right on top of the field, and it is LOUD. Lloyd Carr called it the loudest stadium he's ever been in, and, in big games, the noise routinely exceeds the pain threshold.

While Duck fans are loud and passionate, they are a friendly bunch. Many of them will engage you in conversation on your way to the game (most people park on campus and walk across the river to the Stadium, a mile or so trek, unless you take the bus), ask you how you are enjoying your visit, etc. However, in recent years, the students have become much more belligerent, and if you do encounter any abuse, it is likely to be from a drunken idiot in the student section. Get there early and grab a beer in the Moshofsky Center (indoor practice facility) before the game, and hit up Rennie's Landing on campus for a drink afterward.

OTT: If I were to compare Oregon to a Big Ten program I would pick Wisconsin: a solid program that plays in big bowls, but has been right on the cusp of national post-season stardom for a long time without breaking through. Would you say this is accurate?

ATQ: I've actually long compared Oregon to Wisconsin. Every four or five years, they'll contend for the BCS, every once in a while, they'll go 6-6, and the vast majority of the time they're 8-4 or 9-3. Those two are the best of what I'll call the second tier programs. Not elite like LSU, USC, or Ohio State, but clearly a step above other BCS programs.

Thanks Dave! Expect an Off the Tracks feature over at Addicted to Quack later this summer as I return the favor. It is clear that Purdue’s run defense must be improved dramatically in order to have a chance in this one. We will also need to have our receiver on the same page with Painter. Thankfully, the game against Northern Colorado will allow a tune up for this. More later this week in my preview.