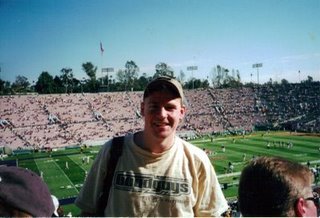 I hope everyone enjoys the new picture off to the right. It illustrates the pinnacle of Purdue football for the last 40 years, and hopefully it won't be another 40 years before I can get another picture. I found it last night and simply had to post it.

Today I am going to step back a bit and look at Notre Dame again as Blue Gray Sky stops by to answer a few questions about this season's Notre Dame game. Pat seems to have a very guarded view of the Irish this year, as it is a critical season for Charlie Weis in South Bend. With both teams being so close in the Rivals countdown (Purdue is a little high at 38 in my opinion, Notre Dame is 40th) we should be in for a good game in South Bend. Here is what Pat has to say:

Off the Tracks: There is certainly nowhere to go but up, and with a much easier schedule it can be easy to get carried away. What are your thoughts on 2008? Being 11-0 heading to USC is possible, but how probable is it?

Blue Gray Sky: Honestly, I haven't really though too much about 2008 from a win-loss perspective. I was so far off in my prediction last year, that I'm not all that eager to make another guess. There are going to be a number of games that are toss-ups this year, including the Purdue game, that will make or break the season for ND. I'd say that heading into the Southern Cal game at 11-0 would be more than extremely optimistic. The team is still young at many positions and even though many of them are talented, it's asking a lot for a team this young to reel off 11 straight wins. I also don't think ND will have the defense, particularly against the run, to stay unbeaten into late November (Ed. Note: Notre Dame was one of the rare games we stayed committed to the run last year, so hopefully we will do it again).

OTT: Much was made about Jimmy Clausen cementing the starting job in the spring, but he really had no competition. What roles will Crist and Sharpley play in the fall?

BGS: With a healthy Clausen clearly the starter heading into the fall, Evan Sharpley is the definite backup. Sharpley has the talent to manage a game but he's not going to have ND winning games they shouldn't. As for Crist, ideally he can use the year to get familiar with the playbook and take some reps in practice. If he can preserve a year of eligibility, that would be great as it would give him another year of separation from Clausen.

OTT: How about the offensive line. Can a group that was terrible most of last season solidfy with the loss of Sullivan?

BGS: It's going to be hard for them to be any worse than last year. The team will definitely miss Sully from an experience standpoint, but his replacement Dan Wenger has plenty of potential. His biggest issue is just staying healthy. There will be plenty of size for ND to run behind on the right side of the line with Chris Stewart (6'5" 340) at RG and Sam Young (6'7" 330) at RT. We'll just have to wait until fall to see if the line has fixed the awful pass blocking (Ed. Note: Sounds familiar, could we see a record number of sacks on both sides as Painter struggles to find time?). If they can't give Clausen time to throw, then teams will be able to load the box to stop the run and even the added heft won't help.

OTT: Defensively there is a ton of talent, but the run defense was a major issue last year. Is there enough improvement to get the opposing offense off the field faster?

BGS: This is where ND fans cross their fingers and hope new coach Jon Tenuta can work his blitz-crazy magic. Trevor Laws will be nearly impossible to replace along the line and rush defense is probably the #1 concern heading into the season. ND had a hard time stopping the run last year and have to improve after losing the best player on the line by far. I suspect teams will have success on the ground against ND, especially early on in the season. There are a few promising freshmen, but they are still freshmen and you can't expect too much out of them. If the run defense does improve, it will likely come from new defensive schemes or the play of the linebackers. The D-line will be a work in progress this year.

OTT: What is your honest assessment of coach Weis and how much improvement must he show this year after bringing in one of the best assortments of talent in the nation? How much of last year was honestly Ty Willingham's fault?

BGS: Is this the part where I as an ND fan get to blame Ty for everything? It would be nice to lay it all at his feet, but last year was pretty much all on Charlie. Sure, Ty's awful recruiting left ND undermanned in the upper classes, but it's not like Navy or Air Force were bringing back Top 10 upperclassmen recruiting classes either. Charlie made a lot of coaching mistakes last year and while I'm going to stay away from any sort of win-loss improvement metric for now, I think he needs to demonstrate that he learned from last year. Fixing the offense will be the most obvious sign, but his ability to manage the players and other coaches will be just as important. I realize "I know it when I see it" is a bit of a dodge of your question, but that's how I'm approaching the season.

OTT: Along those same lines, why has Notre Dame struggled against coach Tiller historically? I say struggle simply because Tiller has a respectable 5-6 record against the Irish after a 12 game losing streak. Is it coaching turnover, talent development on his end, or sheer luck?

BGS: Initially, I think ND struggled due to the uniqueness of the Boilermaker offense. The Irish teams were geared to stop the rush heavy attacks of teams like Michigan, MSU, Southern Cal, and even Navy to some extent. Then Purdue would come in with an entirely different style of offense. And when you mix in ND's passive, read and react defensive coordinators the past few years (Kent Baer and Rick Minter), it's not to hard to see why such a quick hitting offense had success against the Irish. Tiller also had the good fortune of facing off against Davie and Ty, but that isn't completely fair as Tiller did drastically improve the Purdue program, especially on offense.

OTT: Finally, what is the general mood of the Irish fanbase coming into 2008 after what happened last year?

BGS: Apprehensive is probably the best word to describe it. Everyone is excited to put last year behind us and see what young players like Jimmy Clausen and running back Robert Hughes can do. But at the same time there is a sinking feeling of "what if we don't improve"? The fear isn't so much about piling up more losses as much as it is not wanting Charlie to fail. If he fails this season, that will make three failed coaching hires in a row for ND. I'm (nervously) more optimistic for Charlie than I was for Davie or Ty, but that is owing mostly to recruiting results and the presence of coaches like Jon Tenuta and Corwin Brown. We all want to write off last year as a fluke, but we can't do that until we start winning a whole lot more.

Thanks Pat! If anything, this makes me feel a little bit better about heading to South Bend knowing both teams have tons of questions and weaknesses. Still, I know historically we have not done well there, so nothing is certain.