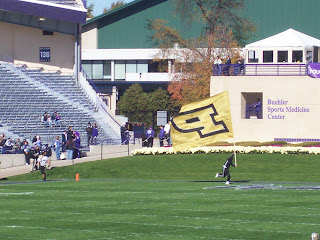 For this being the middle of summer, it has been quite a busy week in the land of Purdue. I’ve actually managed to find a ton of updates that are Purdue-related for this week’s Boilermakings.

Lake the Posts completed its wonderful work this week in compiling the Big Ten bloggers’ pre-season picks with some fun categories. My fellow bloggers were asked to pick a number of categories from who is most likely to win the Heisman to which coach is most likely to have a post-game meltdown. You can see the final results here, but the following is how I voted:

Coach of the Year: Pat Fitzgerald – I am really sold on Northwestern this year. As stated previously, I think they have one of those years in them where they get about 2-3 wins that no one will give them a chance to win. Of course, I was really sold on Iowa two years ago and picked Michigan State to not win a conference game last year, so what do I know.

Most Likely To Strike Heisman Pose: Chris "Beanie" Wells – I’d love to say Painter, but even a Big Ten championship may not do it for him. For him to get it Purdue would have to finish 11-1 and Painter would need to go for about 4,000 yards and 35 TD’s. That still may not be enough. I’ll work on it on NCAA ’08 Playstation-wise and get back to you.

Last Year's Illini Will Be This Year's ???? (most improved): Michigan State – I don’t know about this one. Michigan State either has a big year in them, or they could do what I expected last year and struggle all year. I feel more secure about giving it to Northwestern.

Upset game of the year (include non-conference): Purdue over Oregon – Yeah, I predicted Oregon in my preview, but I feel this is our best shot at an upset.

Name You'll Know In December That No One Knows In June: Ryan Kerrigan, DE Purdue – He seems like the next DE that will break out for us. He reminds me of Rob Ninkovich a bit.

Most Likely To John McLaren (aka lose it in postgame rant): -- I accidentally didn’t choose a coach on my ballot, so I’ll belatedly choose Rich Rodriguez. He’s under way too much pressure at Michigan to not snap if they lose a few in a row.

The Must See Game of the Year that is not Ohio State - Michigan: Purdue-Oregon on September 13th. – I’ve been looking toward this game for a long time. It should be a great one.

Past and Future Boilers make reservations for Beijing:

The last two weeks I have written about Purdue javelin thrower Kara Patterson’s chances of representing the U.S. and Purdue in the Olympics in a few weeks. In Indianapolis earlier this week, however, a future Boilermaker made sure someone will be representing Purdue in Beijing. Incoming freshman David Boudia won this week’s U.S. Olympic diving trials to clinch a spot on the 10 meter platform in Beijing. Boudia was homeschooled the past two years as he concentrated on making it to Beijing, but he will attend Purdue this fall, hopefully with some Chinese gold to hang somewhere in his dorm room.

In related Olympic news, Purdue will also be represented in the Paralympics by rower Emma Preuschl. Preuschl recently qualified for the Paralympics as part of the U.S. National adaptive rowing team. I have nothing but respect for the athletes that compete in the Paralympics. I tend to keep myself in fairly decent shape, but these athletes could probably run circles around me despite their physical disabilities. It is wonderful to see Purdue represented well in both events in Beijing, and more is sure to come.

Much has been made about Purdue’s apparent lack of size on the hardwood. This past week, however, the Boilers got some big help as Danville’s Travis Carroll announced his commitment for the class of 2010. This isn’t exactly earth-shattering news in this forum, as anyone who follows Purdue basketball likely already knows about it. It is still good news though, as Matt Painter works to keep much of the state’s best talent right at home (and heading north instead of south). Unfortunately, we won’t be able to get much help from Carroll until the fall of 2010, but we can dream of pairing the freshman Carroll with seniors Hummel, Moore, and Johnson. Carroll appears to be a solid passer and rebounder as well as a scorer inside, so he will be a very nice fit. Last season for Danville as a sophomore he averaged 20.3 points and 13.8 rebounds per game.

Carroll’s commitment gives us a very balanced lineup for what could be a serious run at a national title in 2011. Here is how the roster could look that season:

That list doesn’t include any other pickups like Donnie Hale, DeArmon Davis, or (in a dream world) DeShaun Thomas. All of it is homegrown talent except for Smith and Jackson. I especially like the balance of that roster. Jackson will be an experienced true point guard to distribute the ball. Smith and Hart can shoot well. Hummel, Moore, Byrd, and Barlow can shoot from outside as well as get to the basket. Carroll, Robinson, Johnson, and Bade would provide size and depth in the paint. The 2010 team won’t be too bad either with Kramer and Grant getting one last run with everyone above except Carroll. It’s a sahme we missed out on another pretty good player in Winchester’s Tyler Koch.

The highest Purdue player drafted in this year’s Major League Baseball draft has inked his first professional deal. Closer Josh Lindblom, a townie that went to Harrison before transferring back to Purdue from Tennessee, signed a deal with the Dodgers after being the 61st overall selection in the draft earlier this month. Lindblom led the Big Ten in saves and helped lead Purdue to its best season ever in Big Ten play. He’ll also get plenty of opportunities to play locally as he begins his professional career. He was assigned to the Great Lakes Loons of the Midwest League. The Midwest league has teams in Ft. Wayne and South Bend, as well as several Midwest cities and Dayton, Ohio. This will give his family and friends plenty of chances to see him play locally.

The last Boilermaker to make the majors was Dave Gassner, who got a cup of Cuban coffee with the Twins a few years ago as a starting pitcher. The Dodgers plan to eventually convert Lindblom over to a starter, which is surprising considering how he thrived as a closer. I guess if it worked for Ryan Dempster it can work for anyone.

Brian Cardinal continues to get paid well for doing nothing:

Don’t get me wrong, I am a big fan of Brian Cardinal. I think he was a great player for Purdue and plays the game the way it should be played. Sadly, one of the highlights of my basketball career involves Cardinal. Very early in my freshman year I went to the co-rec to play some basketball and I got in a pickup game with him on my team. I got the ball on a 2 on 1 fast break after a steal and none other than Citizen Pain was flying down the court with me. Being barely 6 feet tall on my best day with a questionable left hand I felt I was going to easily get swatted by the defender running back. I was able to dish to Cardinal for a sweet finish (He probably gave an effortless dunk, I can’t remember), that earned the compliment of "nice pass" from Brian.

Considering I couldn’t even make my 7th grade team because of my size (I was cruelly cursed to grow three inches very late in my senior year of high school) it felt pretty good. Almost as good as the day I was playing at the co-rec and a guy said I couldn’t shoot in a game. Three made 3-pointers and a steal for the game-winning basket later (all while saying I was terrible after each made shot) I had won respect.

Enough about my pitiful basketball exploits, however, and back to Citizen Pain. Cardinal was thrown in as part of deal between Minnesota and Memphis late last night that gave the Timberwolves some Love for holding the Mayo for awhile. I like how the two best players in this trade are guys who have yet to set foot on the court in the NBA. The remaining players are guys that get shuffled around for contract reasons like deck chairs on the Titanic. Cardinal is one of those deck chairs, sadly. Last season he made $5.85 million for 37 games of work on a craptacular Grizzlies team. He only averaged 3.4 points per game. That is just 124 points for the entire season, or roughly $47,000 per point scored.

In related news, I am hiring his agent as my agent when the NBA announces its designated free throw shooter rule to combat Hack-a-Shaq. You have no idea how sickening it feels to struggle finding work at all when Brian Cardinal gets $47,000 per made free throw.

At least it has worked out better than when we gave that plane to Amelia Earhart:

The following isn’t sports news, but I came across the article and thought it was cool. Apparently Purdue has entered a team in something called the Air Race Classic, a cross-country air race made up of teams of women pilots that go from Bozeman, Montana to Mansfield, Massachusetts. This year’s group from Purdue is on pace to finish a day early and set the tone for other teams that will compete later this summer.

I cannot do this story proper justice in such a short space, but the Lafayette Journal and Courier has a very complete article, complete with team diary, found here.