Share All sharing options for: Boilermakings for Friday, June 6, 2008

As we celebrate the 64th anniversary of the D-Day invasion of Normandy I begin what I hope will become a semi-regular feature here at Off the Tracks. I liked the style of post I set up last Friday, so I decided to continue it on an official basis with the name of Boilermakings. Basically, it is quick hit of any news pertaining to Purdue in any way, shape, or form for that week. I’ve noticed a spike in comments recently since I have turned off the moderation, and I think it is awesome. I truly appreciate everyone who has stopped by, and I love the discussion that is being generated. Hopefully this new feature will generate even more. Here we go!

Looking for a few good men: 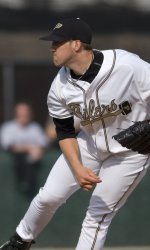 The 2008 Major League Baseball First-Year Player Draft began its meandering journey through 50 rounds yesterday. Normally it goes along silently as numerous players are selected in high school, but they don’t like their positioning so they choose to go to college instead. Since Purdue is far from being a powerhouse in the world of college baseball the Boilers normally have just a handful of guys drafted in the later rounds, if anyone at all. This year appears to be an exception as closer Josh Lindblom and first baseman Ryne White, both juniors, were selected in the early rounds.
Lindblom originally played at Tennessee before transferring to Purdue, but he played his high school ball at nearby Harrison High in West Lafayette. He was the first player from the Big Ten selected yesterday, going in the second round and 61st overall to the Los Angeles Dodgers. I was fortunate enough to attend a late season double header and see Lindblom pitch against Michigan State. The kid has some good stuff. He averaged more than a strikeout per inning and led the conference in saves. Lindblom is just the sixth Boilermaker ever to be selected in the first 100 picks, and first since Chadd Blasko went to the Cubs 36th in 2002. He was originally drafted in the third round out of high school by the Houston Astros.

White was later a fourth round selection of the Arizona Diamondbacks. He could return to the area later this season as the D-backs’ class A affiliate is the South Bend Silverhawks. White’s selection was the 138th overall, and just the 13th time a Purdue player has gone in the first 10 rounds. White set a number of Purdue career records in conference play, batting .402 with 82 runs scored and 80 RBI over the past three seasons of conference play.

I offer and congratulations and good luck to these guys as they continue their careers. Today we could see a few more players’ names called as the draft continues through its 50 rounds. Hopefully this is a sign of the baseball program turning a corner after one of its better years. 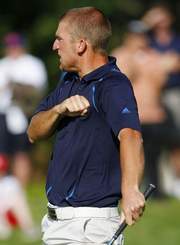 Be our guest:
It went a little under the radar, but Purdue recently hosted the 2008 Men’s Golf NCAA Championships. The Boilermaker men did not participate in the event, but the Kampen course drew high praise from tournament officials. It is the first time Purdue has hosted the event, and with the NCAA just 50 miles down I-65 and the amount of praise Purdue received as hosts don’t be surprised if it is a much shorter wait than 47 years before it returns.
Purdue hosted the women’s championships in 2003, so this is the second time in five years Purdue has been tapped to host. Don’t forget that the new Aquatics facility has also already hosted an NCAA championship event. It’s great to see the investment in some of these world-class facilities is beginning to pay off. I am certainly all for anything that puts Purdue in a good light. This just shows that our facilities are much more than Mackey Arena and Ross-Ade Stadium. Once the Mackey renovation is completed things will look even better. There is even some talk of Purdue becoming a permanent host of these championships. 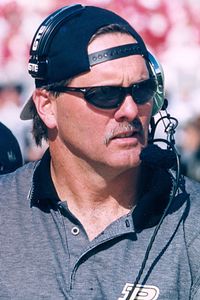 Who is this guy’s dealer, because that’s some good s***:
While prowling the GBI message board yesterday I came across this glowing article concerning Purdue coach in waiting Danny Hope. I am as optimistic as the next guy when it comes to Purdue football, but I must say that this review is way out there. Coaching a team to success in the Ohio Valley Conference is one thing, but the Big Ten is totally different. I would very much love it if coach Hope did indeed turn Purdue into a powerhouse, but I am also realistic. I know that it would take a herculean effort to put us on par with the Miami’s, LSU’s, Ohio State’s and USC’s of the world. Does that mean we shouldn’t even try? Of course not!
I am excited that the addition of Hope will invigorate recruiting. I am also hoping that it will re-ignite a fire in the team that seems to have gone away over the past few seasons. I think we can all agree that since The Fumble Purdue has been one of those good, but not great teams. I recognize that I will likely never see my Boilers play for a National title, but I certainly think regularly competing for the Big Ten title is possible. The early signs are there that Hope can get us to that point, but I will patiently wait and see while enjoying coach Tiller’s final season. 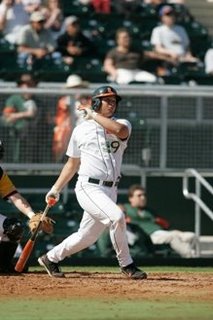 What to watch this weekend:
As you can see, it is a very slow time for Purdue athletics. That is why at 7pm tonight I’ll be settling in for some college baseball as the #1 ranked Miami Hurricanes host Arizona in game one of a Super Regional. I would love for the Boilers to get even close to Miami in terms of the baseball program. The Canes had three players selected in the first round alone yesterday, with first baseman Yonder Alonso leading the way at #7 overall. Miami has a chance to go down as one of the best college baseball teams in history. They are currently 50-8 on the season and they were given one of the most difficult paths of any #1 national seed in NCAA Tournament history. If you want to check out some guys that stand a good chance of being fantasy baseball studs in a few years, watch this series this weekend on ESPN.
Just don’t believe the hype that Florida State is actually a good college baseball team. Despite great regular seasons and high seeds, they are the Buffalo Bills of college baseball. They have never once won a national championship, so expect them to falter yet again this season while others like Miami and LSU succeed. There is a reason coach Mike Martin is called the Lord of No Rings.