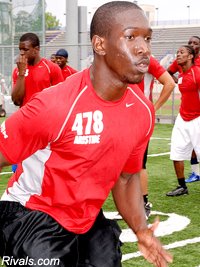 Boilers get first football recruit for 2009

We begin this week’s edition of Boilermakings with the end of a long national nightmare. There has been much consternation among fans of the football program that the Boilers had yet to get a commitment for the 2009 class. As of late Wednesday, that angst is no more. Purdue now joins everyone except Indiana in the Big Ten by having at least one verbal commitment for the 2009 class. Purdue welcomes the commitment of Florida high schooler Ishmael Aristide.

Mr. Aristade doesn’t have any stars assigned to him yet, but his knee injury in spring practices probably has something to do with that. Though he is listed as an athlete, he will like play somewhere in the secondary once he gets to Purdue. He has some good speed and comes from a talent-rich state. I am also encouraged by the fact that he was being recruited by some other pretty good programs. Naturally, there is the concern for his knee getting back to full strength, but I seem to remember another highly-recruited player that was virtually ignored by the big programs in his home state after a torn ACL. He ended up Purdue, and it worked out rather nicely. I’m not saying that Mr. Aristide will turn into another Brees-type, but he can recover and contribute nicely. If anything he will provide much needed depth at cornerback or safety. Hopefully he is just the first of many new quality recruits that Danny Hope will bring in. I do like that he seems determined to prove people wrong about his injury. This is the type of player we need.

Speaking of long national nightmares being over, the Big Ten Network has finally come to an agreement with Comcast. This is great news… for those who have Comcast as an option. Living in downtown Indianapolis means that I am still forced to purchase tickets to the games I actually want to see. Satellite isn’t an option, otherwise I would have switched long ago. I am prisoner to Brighthouse Networks, and they have perhaps the worst customer service record as far as listening to their customers. They still have not reached an agreement with the Big Ten Network, and seem fully entrenched on not doing so. It is my hope that the Comcast domino will nudge Brighthouse into a deal, but who knows. I never thought I would miss living in Kokomo and working for Insight (now owned by Comcast) because I was able to get every channel for free. Since I now have just two options when it comes to cable, either Brighthouse or Amish cable (that is, rabbit ears), I’ll keep waiting and hoping. At least more than four people will be able to watch the Big Ten Network now.

As mentioned last week, Purdue’s Kara Patterson was one of the favorites to bring home an NCAA championship in this week’s NCAA Championship track and field meet. Patterson carried the #1 seed into the javelin competition, and will compete later this summer for a spot in the Olympics. Patterson did not come home with a national title, but her throw of 53.93 meters was good enough for a fifth place finish and All-American honors. I did not realize that Purdue’s Lindsey Blaine was the NCAA champion in last year’s javelin throw, so this is the second consecutive year that Purdue has faired well in this event.

Patterson will compete on June 28th in Eugene, Oregon for a spot on the U.S. Olympic team.

Our friends in the Big Ten Blogging network have come through once again. Lake the Posts has continued its diligent work in compiling some pre-season Big Ten honors. While last week’s picks weren’t very kind to the Boilers, this week’s all-Big Ten first team selections were much better. Curtis Painter, Greg Orton, and Anthony Heygood were named to the first team.

Ohio State led everyone with eight selections, four on each side of the ball. The final selections were actually very close to my ballot listed here:

On a couple of the picks I had to just make some educated guesses, so I was probably pretty far off on the defensive side of the ball. The one I recognize I missed on was Maurice Evans for Penn State on the defensive line. I have the feeling that I will be selecting him for some post-season honors, should we do them.

More knees in the news

While much of Boilermaker nation is concerned with the knee of Ishmael Aristide, he won’t be playing at least until Purdue opens the 2009 football season against Toledo. A much more pressing concern is Keaton Grant’s knee. According to the Lafayette Journal and Courier, Grant’s knee is on schedule to have him at 100% by the time practice officially starts in October.

The article has some pretty good updates concerning the state of men’s basketball for the fall. I am slightly concerned about the status of Lewis Jackson in terms of his eligibility, however. Since I was working for the NCAA for about 8 months I was able to check on the status of each and every athlete. Of course, publishing that information here would get me in severe trouble, so I never did it. I can say that we likely won’t know anything for a few months because they will concentrate on fall sports athletes first. They will be working throughout the summer, however, to get through everyone.

Calasan’s case was a little bit different because his issue was based on amateurism. This is a new area the NCAA has had to look at, and it is completely separate from academics. A student can be academically eligible but still have something hanging them up when it comes to amateurism. That can sometimes take a little longer as they wait to get the information they need before making a ruling. The people that work on all this stuff are good people, and I do miss working with them. Whatever they rule in Jackson’s case will be the right call.

Purdue’s football schedules are now complete through the 2012 season. This is important because starting in 2009 the Big Ten will allow for games after Thanksgiving. There were no changes for the 2009 schedule, but beginning in 2010 Purdue will be ending the season with Indiana a week later than normal. I actually like this, as it gives us our bye week back. Purdue has traditionally had its off week from Big Ten play very early in the season. To accommodate our rivalry with Notre Dame, however, we have often had to face the Irish in this week, giving that bye up.

Purdue has not had a scheduled off week since the 2001 season. That year we had the week of September 9th off after opening the season at Cincinnati. We were then scheduled to play Notre Dame on September 16th, but that game was postponed to December 1st because of September 11. In every year since 2004 Notre Dame has occupied our Big Ten bye week after we started conference play. We technically get an off week in 2008, but that is only because we’re starting the season a week later than most teams. I would rather play someone that opening weekend and lose Central Michigan from the schedule, but I am not making the schedule.

One thing that does displease me is that we have continued to schedule games against 1-AA opponents. We have absolutely nothing to gain from these games, but Western Illinois in 2010, Southeast Missouri State in 2011 and Eastern Kentucky in 2012 will be coming to Ross-Ade. I would much rather have a schedule like the 2009 campaign, where we face a pair of MAC schools, Notre Dame, and another BCS conference team. My ideal schedule would be MAC school, BCS opponent, Notre Dame, and another Big Ten game, but the conference won’t go for that. I wouldn’t mind doing a series with a WAC/Mountain West/Conference USA team in the fourth spot.

Today’s final note is a salute to Dustin Keller and golfer Maria Hernandez. This duo was named as Purdue’s men’s and women’s athletes of the year earlier this week. Hernandez was the first female golfer from Purdue to win the individual Big Ten championship, while Keller recently signed with the Jets. I am looking forward to drafting Dustin as a tight end fo Fantasy football this year, as the New Orleans Looters look to defend their title in the National Freeball League. Now if I can just pair him with Drew Brees, LaDanian Tomlinson, and Adrian Peterson from my team last year.