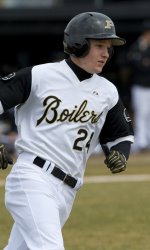 There has been a great story brewing all spring on the northwest side of Purdue’s campus. Most people, however, are missing it. My regular readers know that I am an advocate of college baseball because of my wife’s love for the #1 ranked Miami Hurricanes. This is starting to carry over to the Boilermaker baseball program. Since yesterday was a beautiful day and we had little else to do we hopped into the car and headed to West Lafayette for some college baseball – Boilermaker style.

This year’s Boiler baseball team sits at 27-22 overall, 18-9 in the Big Ten conference and comfortably in second place with four conference games left. In the overall realm of college baseball those are modest numbers. A record like that in the ACC or Pac-10 would have the Boilers on the fringe of an at large berth for the NCAA tournament if not a "lock". In the world of Big Ten baseball, however, the conference is much like the Horizon League on selection Sunday for basketball.

Because of that, the Boilers won’t be dreaming of Omaha unless they pull a shocker in Ann Arbor, but maintaining second place by winning a game next week against third place Illinois means a first round bye in the Big Ten Tournament. Because of thin pitching staffs at the college level, the fewer games played the better. A bye mans that a three game winning streak would put the Boilers in the baseball dance for the first time in 21 years and just second time ever.

It is extremely difficult for a Big Ten program to make the NCAA Tournament as an at large team. In 2000 Purdue had a great record with tons of wins over ranked teams, but was passed over. The same is true in 2001, as the Boilers even began the season by knocking over #1 ranked Rice. Purdue hasn’t really been close to a bid since. They have struggled out of conference some years only to put it together for a good Big Ten. Other years they have had great out of conference schedules, but faltered in the Big Ten to cost them a bid, as was the case in 2001.

This year they started the season with a nine game losing streak, but six of those games were against ranked teams on the road. In five of those six games Purdue lost by just one run. Before beating Michigan State yesterday Purdue had unfortunately lost five in a row (three to Indiana, two to the Spartans) to blow any chance at the conference title after a solid start. The Indiana loss especially hurt, as Purdue had been 5-0 in conference series to that point and Indiana was at the bottom of the standings. It also cost us a point in the Crimson and Gold Cup.

As we entered Lambert Field yesterday my wife and I had opposite reactions. I was stunned at a crowd that, for Purdue baseball, was near capacity. I had been to a few games when I was a student from the 1999-2002 seasons when we had a pretty good team and there weren’t nearly as many people as were there yesterday for the Michigan State double-header. My wife, who is used to about 3500 for your average Miami game and upwards of 7000 for a big series, was shocked that there were barely 500 people there.

As for the games themselves, they were highly entertaining and a great bargain at $5 a person for two games. Purdue struggled in game 1 before losing 11-3, but bounced back for a 6-2 win in the nightcap. The crowd was into it as well, as I will give credit to the athletic department for turning up its promotions engine. T-shirt tosses, baseball bingo, and the normal announcer for football and basketball made it even feel like a bigger event than it used to be. It seems like the athletic department is at least intent on promoting the program. Since baseball produces far less revenue than football and basketball do, and the program only plays about a third (at best) of its schedule at home, I am sure they will take what they can get from a crowd like yesterday.

There are some major positives from this team. Closer Josh Lindblom is a former third round MLB draft selection who transferred in from Tennessee. He nailed down his 9th save in conference play, tying a Big Ten single season record. When he came on to close out game to there were four scouts that sprang into action who had been quiet all afternoon. Centered directly behind home plate, they even added to the atmosphere that maybe, just maybe, the program is growing. Leadoff hitter Brandon Haveman scored three times in the win yesterday to give him 35 runs scored in league play. He is now just four shy of the Big Ten record for runs scored in a conference season.

Most of Purdue’s players come from Indiana, but many of the top prospects from the state are often either lost to the draft or to stronger, out of state programs. These guys still work incredibly hard, and one of the most touching things my wife saw was how close these guys are as a team. For the entire game they were up cheering their teammates on in one of the loudest baseball dugouts I have ever heard. Also, in humbling fashion, these guys do their own grounds keeping before and after each game. You can tell these are guys playing for the love of the game and chasing a dream that, unfortunately, is incredibly far away at a program like Purdue’s.

I was impressed by the crowd as well. It was small compared to many college baseball crowds, but since it was baseball alumni weekend they were into it. With a couple of runners on they really got behind Lindblom as he blew away the last two hitters for the save. Lindblom is as impressive as they come for college closers, and he will be handy if the Boilers are going to do anything in the postseason.

Because of rain Sunday, Purdue’s finale against Michigan State was cancelled, but it ended up being a blessing in disguise. Now that just four conference games remain in the season Purdue holds a five game lead in the loss column over sixth place Northwestern. This means they are assured of being in the Big Ten Tournament as the top six teams of the ten that play baseball (Wisconsin has no program) qualify. Purdue also has a three game lead on third place Illinois, meaning one win in the four game set with the Illini next weekend clinches a first round bye.

Purdue first plays Illinois-Chicago on Senior Day Wednesday at Lambert Field. It will mark the final time that Jordan Comadena (who really needs Funky Comadena as his at bat music), Andy Loomis, Allan Donato, and Tristan McIntyre will play at home. These guys don’t have the name recognition that players like Dustin Keller and Tarrance Crump have, but they have still worked just as hard. It could also be Lindblom’s final game, as this summer’s draft could claim him again. The Major League Baseball draft rules are a little different than other sports. A player can be drafted straight out of high school, but if they choose to enroll in college they must stay for three years, or be 21, before being drafted again. After that, if they don’t like their draft position, they can choose to return and play another year and get drafted a third time.

This coming weekend’s series at Illinois will be televised on the Big Ten Network. While it doesn’t carry the same importance that Miami-North Carolina will as a #1 vs. #2 matchup, it is still a big series of the Boilers’ postseason chances. If you’re one of the lucky five people on the planet that gets the Big Ten Network I advise taking a look and seeing what is one of the more unsung programs. These guys toil in obscurity for the most part in the worst facility of the school’s athletic teams. They deserve any fans they can grab, and they made two more yesterday.

Editor’s Note: Purdue does currently have a plan in place for an improved baseball facility. Since this is the first season that the NCAA instituted a uniform start date in order to level the playing field for the northern teams many programs have decided to upgrade their facilities for what is quickly becoming a revenue generating sport at many schools. The plan is to build a new facility near the soccer complex with lights, meeting facilities, expanded seating and press box areas. These are all areas which Purdue lacks, and would be a huge boost to recruiting if it comes through. Having lights would also allow Purdue to host postseason events.

It doesn’t quite carry the price tag as the Mackey project, but if just $1 million are raised they can begin at the end of the season this year. Details can be found here.