Share All sharing options for: Best wins of the Tiller Era #7: Michigan State 1999 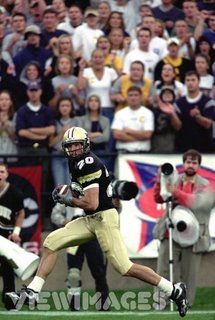 Today’s game on the countdown is the last game that received just three votes, but it is still significant because the win was the highest ranked opponent we have beaten at Ross-Ade Stadium under coach Tiller. The 1999 52-28 win over Michigan State was, at the time, one of the biggest wins in school history. We have always done well and had exciting games against the Spartans under Tiller. This is their second appearance on the countdown, and we will see them again. I am not sure what it is about playing them, but the team that is expected to win usually loses. Many times that has been Purdue, as we have often faced the Spartans in their typical second half decline. Only this past season’s somewhat stunning win by Michigan State in West Lafayette seemed to go against the trend. That and the massive egg we laid in East Lansing just a year after this game.

Michigan State came into this game with incredibly high expectations. The week before this one they had held serve at home by knocking off hated rival Michigan 34-31 in East Lansing. Both teams were undefeated coming in, and Michigan had just beaten us, as usual, 38-12 in Ann Arbor. The win meant that the Spartans were in the driver’s seat in the Big Ten and they were actually in the discussion when it came to the national title. There was reason for concern in this game as the Spartans had defeated Notre Dame and Oregon in non-conference play, making them even stronger. They also had a win over an Illinois team that would go bowling later that year.

There was plenty of reason for panic coming into this one. The Spartans had an incredibly dangerous receiver in Plaxico Burress who had lit up Michigan the week before for 255 yards and a touchdown. We also had simply not played well in losing back-to-back games against Michigan and Ohio State coming in. At Michigan we played terrible, but we always play terrible in Ann Arbor. Against an Ohio State team that would spend the holidays not going to a bowl game we had every opportunity to grab a rare win in Columbus. Unfortunately, we too often had to settle for Travis Dorsch field goals instead of touchdowns. His final attempt was blocked with less than a minute left in a 25-22 loss. Thus began the rumors we could not compete with Michigan and Ohio State back on the schedule. That loss may have been one of the most subtly devastating in program history simply because it was preventable. Had it not happened, the entire perception of Purdue football may have totally changed.

Needless to say, the atmosphere going into the stadium that day was not one of optimism. Since we had just suffered a pair of brutal road losses we weren’t that excited to come home and face a top five team. That would quickly change, however, thanks to Drew Brees.

This was a homecoming game, and it was probably the best we have ever played on homecoming under coach Tiller. Most of it came in the form of 509 yards and five touchdowns from Brees. 301 yards, 21 receptions, and three of those touchdowns went to Chris Daniels, who set Big Ten records for receptions and yards in a single game. It was like these two had a Shinning going on that day. They were unstoppable.

Michigan State was coached by Nick Saban, author of the tragedy worse than 9/11 when his Crimson Tide lost to Louisiana-Monroe last season. Saban may have won a national title at LSU, but Purdue made him our bitch when he was at Michigan State. This was another game in which he had no answer for the Purdue offense. At least Michigan State did get off to a good start when Bill Burke found Burress for an 18 touchdown less than five minutes in. Things quickly turned south, however, when Michigan State missed the extra point.

Two minutes later Purdue took the lead for good when Brees found Daniels for a 51 yard touchdown pass down the right sideline. There wasn’t a defender anywhere near Daniels on the play, not that they could cover him anyway. When Brees had as much time to throw as he did on that play it was an easy score with Daniels that open.

A few plays later Burress fumbled the ball back to Purdue at the Michigan State 27. It then took one play for Purdue to get in the end zone again. Brees found a streaking Vinny Sutherland down the sideline for a 27 yard score to make it 14-6. Michigan State’s next drive ended in an interception by Adrian Beasley near midfield and Purdue was in business again. With 2:30 left in the quarter Brees put it in the end zone again with Daniels from 10 yards out. Stunningly, we were up 21-6 on a top five team at home. Since I was only a sophomore at Purdue my seats weren’t great, but the student section was rocking.

The defense got a quick stop and early in the second quarter the Boilers were driving again. Randall Lane was the beneficiary of Brees’ fourth TD pass in 18 minutes when he scored from the seven with 12:47 to go in the half. The play on the clips from Spoilermaker is even more special, as during the broadcast we see that Indiana got absolutely rocked that day at Wisconsin 59-0. Undoubtedly that score was announced to make a jovial student section even more excited.

We quickly got the ball yet again and were about to score before Brees made his first mistake. Drew threw his fifth touchdown pass of the half, but unfortunately it came on an 88-yard interception return by T.J. Turner. T.J. Duckett scored the two point conversion and Michigan State was back in it, at least for awhile. Purdue would get it back just before the half though when Daniels scored his third touchdown from four yards out to make it 35-14 at the break. All told Brees went for a monstrous 344 yards in the half, 200 of them to Daniels. If you count Turner’s pick he also threw six TD’s.

Things slowed down somewhat in the second half as Purdue had to rely on its defense more. Michigan State made things interesting by scoring on a T.J. Duckett run to cap its first drive of the half. Brees then threw a second pick-6, this time to Aric Morris, who returned it 76 yards for a score. As well as Purdue played in the first half, the Boilers were suddenly only up 35-28 with 4:14 left in the third.

As always, Brees had an answer. Drew engineered another lengthy drive and took it in himself from a yard out with 1:28 left in the quarter to bump the lead back up to 14. Michigan State threatened on its next drive, but Beasley came through with his second interception of the day at the goal line. Beasley returned it to the 42 and Purdue was in business again.

A quick side note on Beasley: was there a defensive player that was involved in more big plays from 1997-99 than him? We saw he had a two interception game against Oklahoma State in the last game on the countdown, while we see him here again. We forced 6 turnovers int his game, and BEasley was involved in at least half of them. He also had the huge fumble return against Notre Dame in 1997 that was the turning point of the last 12 years of Purdue football. This kid was money for us, and it’s a shame more people don’t remember him.

After Beasley’s second pick little else happened as the teams seemed to be wore out from trading punts. Purdue finally got on the board again with 3:19 left when Travis Dorsch kicked a 23 yard field goal. The Boilers then added some icing to the win when David Nugent returned a fumble for a touchdown 18 seconds later to cap the scoring. It was an especially sweet play for Nugent, as the previous season he had a TD in the Kansas State game and the sack that clinched the game at Michigan State. All that was left at that point was to watch another promising start to a Michigan State season go up in smoke.

Anyone who was a Purdue student at the time remembers that Follett’s had a special deal for the Monday’s following home football games. The deal was that you would get a discount on any Purdue merchandise equal to the number of points scored by the Boilers in the previous Saturday’s game. While I had missed out on a 58% discount after beating Central Michigan earlier that season, I remember cleaning house to the tune of a shocking 52% that Monday. Since it was just after my birthday it meant I had some extra cash to spend as well, so it was a pretty sweet.

This was an especially vindicating win for the program that needed a big one at the time. It also elevated Drew more into the national consciousness, as it was the best he had performed on the big stage since the Alamo Bowl upset of Kansas State. Even though he ended up throwing four interceptions, his 509 yards and 5 touchdowns was still quite impressive. Michigan State lost the next week 40-10 at Wisconsin, but didn’t lose another game that season. They went on to finish 10-2 with a Citrus Bowl victory over Florida on New Year’s Day, making them our best win of the season. That make’s Drew’s performance look that much better.

We finished the season more down than up. It was the last time we would leave Ross-Ade happy that year, as home losses to Penn State and Wisconsin put a damper on the finish. After the Michigan State game we had a 15-1 home record under Tiller, including 10 in a row, but that changed. Close road wins at Minnesota and Indiana put us in a New Year’s Day Bowl for the first time in the school’s history at the Outback Bowl (technically the 1967 Rose Bowl was played January 2), but we all know what happened there. At 7-5 we finished a respectable 25th, but the season could have been so much more.

All told, I think the 1999 season was just setting the table for what happened in 2000. We learned some lessons we needed to learn in some tough losses, and Drew learned what he needed to learn by being in the national spotlight for the first time. It would make him a much better player the next season.