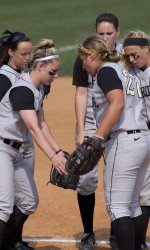 This year marks the 27th NCAA Women’s softball tournament, but for the first time the Purdue Boilermakers will be involved. In an effort to truly be about all things Boilermaker, as promised in the banner headline, I wanted to take a break today and write a little bit about this accomplishment. Women’s softball is probably pretty far off the radar for the average fan. I would even bet that there are some followers of the football and basketball programs that don’t even know we have a team. We have certainly had better teams in other non-marquee sports. The women’s golf team comes to mind after finishing national runner-up last season. They are also in the running for the national championship again this year, and will compete next week.

Still, it is not every day that a program makes the first appearance in school history in its respective tournament. To my knowledge, every other team that Purdue fields has made an appearance on the national post-season stage except the softball program. Since their stay in the tournament will likely be short, it is time to give these ladies their due.

History of the Program:

There honestly isn’t a ton of history, especially considering that Purdue plays in a conference with national powers Michigan and Northwestern. The program began with a 10-2 loss to Canisius on March 5, 1994. Coming into this season the Boilers had an overall record of 443-366-4, meaning the 500th win in school history is a strong probability for next season. That first season Purdue finished 21-17-1 for a modest debut. Before this season the high water mark was a 41-25 record in 1997 that did not yield an NCAA bid. Andrea Hillary is the program’s only 1st team All-America selection in 2003.

Purdue completed this year with a 34-21 overall record and 9-9 finish in the Big Ten. Any NCAA bid was in doubt with an opening loss to Minnesota in the first round of the Big Ten Tournament, but the committee decided to reward the Boilers on a strong non-conference schedule against several challenging opponents. Purdue started out the season by winning 20 of its first 28 games. All told Purdue faced 7 ranked teams this season, with the best win coming over #7 Baylor 6-5 in extra innings on February 15. Though the season started on February 8th, Purdue did not play at home until March 28th. 14 Purdue opponents played in last season’s NCAA Tournament. One of their possible opponents in the regional, Cal State Fullerton, already owns a win over the Boilers 5-0 on February 29th.

Purdue is seeded third in the four team, double elimination regional hosted by UCLA. Purdue will open against 20th ranked Nevada in what some on the GBI boards are calling the battle for Dario Camacho. The loser gets Dario Camacho’s services. Nevada rolled through the WAC with a 17-3 record in conference play and 42-16 record overall. For those lucky enough to have ESPNU the game will be televised at 5:30 today.

The other game features Cal State Fullerton (27-26-1) as the #4 seed against top seeded UCLA (45-7). The Bruins are the #2 seed nationally and have won 11 national championships, the most in NCAA history. They are the heavy favorite to win their own regional and return to the Women’s College World Series. In nine games against the other three teams in this regional Purdue has never won a game in its history, going 0-1 against Nevada, 0-2 against UCLA, and 0-5 against Cal State Fullerton. Purdue will be hard pressed to avoid being the only team in this field sent home with an 0-2 record. Any win would rank among the biggest in program history.

Who are the Boilers:

The game of softball is built on pitching, and Purdue has a pair of hurlers that have had strong seasons in the circle. Freshman Suzie Rzegocki carries a 15-8 record in 26 starts while junior Dana Alocer has started 29 games with an 18-13 record. Rzegocki has the better overall ERA at 2.49 while Alocer checks in at 3.31. In the opening game either will be matched up against sophomore Katie Holverson (20-6, 2.27 ERA) or senior Jordan McPherson (15-9, 2.61). Those two have combined for 309 strikeouts on the season against 251 for Purdue’s duo.

Offensively Purdue has three players batting over .300 with second baseman Kelly Miller leading the way at .346. Miller only has four walks on the season, so its feast or famine with her near the top of the lineup. Shortstop Candace Curtis provides most of the power in the Purdue lineup. She bats .333 with 11 homers and 39 RBI, leading the team in both categories. Kelsey Haupert (.322, 7 HR, 2 RBI) and Ashley Hall (.311, 15 RBI) also provide some pop in the Boilermaker lineup. Katie Mitchell is a bit of a clutch performer. Her average is only .270, but she is second on the team in RBIs with 31. Hall is the speedster of the group with 8 triples and 8 stolen bases.

Purdue is a very strong defensive team. The four infield positons of Miller, Curtis, First baseman Haupert, and third basman Hallwere recently named to the All-Mideast Region second team by the National Fastpitch Coaches Association. I don't know what exactly comprises the Mideast region or how many teams are in it, but I assume that this is a pretty good honor that the entire infield made it.

Advancing in this tournament will be difficult. The Boilers struggled offensively for much of the conference season and they are facing three teams that are very experienced. Nevada is one of the dark horse candidates to reach Oklahoma City, as they have some signature wins over powers like Arizona and Fresno State who are both seeded in this tournament nationally. If there is one team that has a chance to knock off UCLA, it is generally considered to be the Wolfpack. The fact that Purdue has already lost to the four seed in this regional, and that four seed was barely over .500 on the season, is not a good sign. Fullerton also already owns a win over UCLA on the season. Purdue is generally considered to have been one of the final at large teams in the field. The fact that they were sent across the country while the other three teams are playing relatively close to home is a sign of this. Expect the Boilers’ stay to be a short, but memorable one.