Share All sharing options for: Boilermaker Odds and Ends for Memorial Day weekend 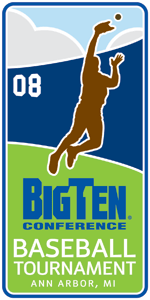 (Sorry for the delay in posting. I was awarded the afternoon off, so I went to see Indiana Jones.)

I hope everyone has a safe and happy Memorial Day weekend. With as much high school baseball and softball as I have covered this week in addition to a new temporary job I have started I know it will be a well earned rest. I’ll be back next week, however, with the #1 game in the countdown and an opening look at each team on the 2008 schedule as the Know thy Opponent series will be returning. Here is a bevy, a cornucopia, or a potpourri, if you will, of some odds and ends for the weekend.

If you’re one of the four lucky people on the planet that gets the Big Ten Network be sure to tune in tonight around 7pm (schedule and weather pending) as the Boilermaker nine takes on 17th ranked Michigan in the Big Ten Tournament. Purdue annihilated Penn State yesterday 15-6, scoring six runs in the first inning and never looking back. Dan Black had a pair of home runs and six RBI in the win. It is perhaps the best game Purdue has ever played in the history of the Big Ten tournament. The Boilers and Wolverines are the only two teams without a loss in the double-elimination tournament. A win tonight means Purdue would have to lose twice, once tomorrow and once Sunday, in two games, to be eliminated.

Tonight’s game against Michigan is critical as the winner will be one win away from the tournament title and automatic NCAA berth. The loser must win twice tomorrow and once on Sunday to win the tournament. Michigan is already assured of an NCAA berth and will likely be hosting a regional, so how about you fellas step aside for the good of the conference and let there be two Big Ten teams in the postseason?

Tonight’s first pitch time is contingent upon the length of the previous two games of the day. Indiana plays Illinois today at 12:05. The loser goes home and the winner comes right back to play Penn State at approximately 3:35 this afternoon in another elimination game. The winner of that game will face the Purdue-Michigan loser tomorrow in an elimination game, with that winner needing to beat the Purdue-Michigan winner immediately after to force a winner-take-all game Sunday afternoon.

Purdue has never won the Big Ten Tournament, and hasn’t won a baseball conference title of any kind since 1909. That, my friends, is a Cubs-esque streak that could be just two games away from ending. For a preview of Michigan (based on yesterday’s game vs. Illinois, head over to Maize N' Brew, as Dave is the cause of and solution to all of the Big Ten’s baseball problems.

In doing the Best wins of the Tiller Era series I realize there were about five more games I could have done to make the series an even 20. Instead of going back and doing a full write-up of these games, here is a synopsis of each game I could have added in no particular order since there was no voting done.

Notre Dame 1999 – This one could simply be called Inaction Jackson. One play summed the entire game up, and it was the final one. Jarious Jackson and the Notre Dame backfield only needed to complete a simple handoff and the game was over. The way that fullback Joey Goodspeed was plowing over us for every critical yard the Irish needed in this game one more handoff would have gotten him into the end zone from the one. Instead the backs got confused with Jackson, he had no one to hand off to, and his improvised bootleg broke down. Mike Rose hit him for a nine yard loss and time ran out. Amazingly, Notre Dame had called a timeout to set up the play from the two, but instead the confusion we witness was described by a breakdown in coaching. Surely this is only because Notre Dame was in between offensive geniuses since Jim Coletto was long gone and Charlie Weis had barely broken into the NFL.

Purdue was fortunate to win this game, as a simple handoff to Goodspeed was all Notre Dame needed. I watched this game with my brother-in-law from the top of the student section since I was a sophomore for that season and we couldn’t believe they didn’t just hand off to Goodspeed. He would have easily scored. This game also gets a slight boost for Drew Brees’ acrobatic dive into the end zone against three Notre Dame defenders on a two-point conversion. That play nearly caused 60,000 simultaneous heart attacks, as we did not need to see our Heisman Trophy candidate quarterback taking on three Notre Dame linebackers by himself.

Minnesota 2001 – I cannot believe I left off the Miracle in the Metrodome. Down 3 points on our own 3 yard line with 18 seconds left, no timeouts, and the immortal Brandon Hance as our quarterback. I still have no idea how we won this game. I was home for the weekend during my senior year and I am grateful I did not change the channel. Say what you will about Hance, but this was probably his best game as a Boilermaker. Too bad he didn’t realize we had other receivers outside of Stubblefield and Standeford more often. The final play is worth it just to listen to the commentators describe us as champions since we were defending Big Ten champs.

Wake Forest 2003 – I still think that as a whole, Tiller’s 2003 team was his best. If you take away the Michigan game the other three losses were by a combined 11 points and in a pair of overtimes. All four losses were to ranked teams, two of which played in BCS bowls. As it is Purdue defeated three ranked teams, two on the road against a very difficult schedule. All told, those seven games against ranked teams did not include traditional powers Notre Dame and Penn State.

One of those ranked wins came at a feisty Wake Forest squad that had beaten us in West Lafayette the year before. Though highly ranked in the preseason, we came in with and 0-1 record after a very good Bowling Green team shocked us at home in week 1. Wake Forest was ranked 20th, and as the recap states, we finally found a way to win a close one. Stu Schweigert was clearly the player of the game with an interception and 32 yard return hat set up a field goal. He also anticipated Wake Forest’s final snap on 4th and short perfectly for a backfield tackle that clinched the game. Watching this game while on vacation in Colorado, I was sure he was offsides until the replay confirmed it was just perfect timing.

Washington 2002 – It took a near miracle to qualify for this bowl game, especially after the scarring Ohio State game. Once we got there it appeared as if we were headed to our fourth straight bowl loss when we fell behind 17-0. Much like the Illinois game from that season, we came roaring back to take the lead with 34 unanswered points. We were able to hold on this time as Washington did everything in its power over the final three quarters to make sure we won. You knew things were going our way when Berin Lacevic (some called him the Serbian Shank Machine) actually made two field goals in one game. Anthony Chambers also had a fumble recovery of a Brandon Jones fumble in the end zone for another stroke of good fortune. It felt especially good to beat Washington by the exact same score they had beaten us two years earlier in the Rose Bowl. This is proof we actually won a Sun Bowl! It also marks the last time the former powerhouse played in any bowl game.

Syracuse 2004 – There are other games I could easily put here, but this one stands out because it was one of the most dominating performances I have ever seen a Purdue football team put out there. Syracuse wasn’t great, but they are still a BCS conference opponent. They were a last minute replacement for Cincinnati, who backed out of the return game of a home and home after joining the Big East. This was nationally televised on ABC, and I actually delayed my vacation to Colorado by a day to go to the game. There were a ton of questions about our defense after losing so many guys from the 2003 team to the NFL, but the replacements were awesome in this game.

The offense was incredible as well, as Purdue allowed nothing to Syracuse while scoring at will. The closest the Orange came to getting on the board was a botched field goal attempt on a bad snap. It was picked off by Bernard Pollard and Syracuse never came close again. This was a truly dominating performance and set the stage for our run to #5 before That Game. Since the 63-24 drubbing of Indiana came at the end of the season it was a nice bookend to show just how great that team could have been.

Up after The Best wins series:

As mentioned above, I’ll be getting into the Know thy Opponent series sometime early next week. With that, I plan on branching out to some of my fellow bloggers with some perspective on who we face on the 2008 schedule. First up will be a connection with the premier Oregon blog, Addicted to Quack. That is, unless someone knows of an obscure Northern Colorado Athletics blog out there. So far I have found a blog for each opponent except Northern Colorado and Central Michigan.

It is Memorial Day weekend, and that means some much needed time off. It also means that we remember those who served. All three of my grandfathers served in this country, two by blood and one by marriage. Sadly, one of them is no longer with me, but he is the one that instilled in me the desire to honor all veterans. We have them to thank for our freedoms. Thanks to them I have the freedom to write whatever I want to write without fear of persecution (except from rival fans). If you see a veteran this weekend, be sure to thank them.