Share All sharing options for: Best wins of the Tiller Era #8: Oklahoma State 1997 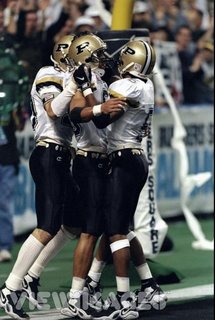 Our next win in the countdown is a step above the others. We had our last tie between this game and the #7 game, but the #7 game came in convincing fashion over a top ranked opponent. Today’s game, Purdue’s 33-20 win over Oklahoma State in the 1997 Alamo Bowl, was a little bit below that. Still, it was an incredibly important win in the history of the program. It had been 13 years since Purdue had played a postseason game, and 17 years since Purdue had won one. We had never faced the Cowboys before, but I am sure that this very game is at least part of the reason that Oklahoma State will be filling the schedule for a home and home series early next decade. I am quite excited to hear that the Cowboys will be coming to Ross-Ade. I am a big fan of playing teams we don’t normally play. That’s why I am also excited for this season’s Oregon game. When Oklahoma State comes to town there won’t be as much anticipation, but Purdue fans will certainly be reminded of that night in San Antonio when they do show up.

This was a new experience for me. I recently looked up what Purdue game was my first and found it was the 22-22 tie with Louisville at the beginning of the 1987 season. That was the year I started going to games with my parents. In that time I had seen a lot of bad Purdue football. By the time the 1997 season had rolled around I was a senior in high school trying to decide if I would go to Purdue or accept an academic scholarship to Bradley University. I recognize now that because of what I got my degree in it wasn’t the smartest choice, but the 1997 Purdue football season greatly influenced my decision. The sudden success of the Boilers was something I felt like I couldn’t miss out on, especially since Bradley didn’t even have a football team. I had never seen Purdue win more than four games in a season, so playing in the Alamo Bowl was new for me as it was for many Purdue fans.

After thrashing Indiana 56-7 to take the Bucket back by force there was a new buzz around the program. With only five previous bowl trips in our history, and such a long drought since the last one, everyone was excited to be headed somewhere. Technically the BCS didn’t exist yet, so with an 8-3 record and 6-2 conference mark we waited several weeks to find out our destination. Most people didn’t care because any bowl game was cause for celebration at that time. As it was, playing in San Antonio was a pretty good bowl game since it was the best non-New Year’s Day bowl game the Big Ten was affiliated with. As a result, Boiler Nation descended on San Antonio.

Lost in the performance of Joe Tiller’s "basketball on grass" offense in his first season was the play of the Boilermaker defense. The offense was certainly fun to watch, but the defense made sure the offense had plenty of opportunities to work. That 1997 defense seemed to always be forcing turnovers, often scoring off of those turnovers. The games against Northwestern, Illinois, and Indiana were especially strong defensive performances, and in the Alamo bowl game the defense came to play again. They forced four turnovers and kept Oklahoma State out of the end zone in the first half. Each turnover was a huge momentum swing as well. The Cowboys had a very potent offense coming into the game as well, but our defense was up to the task.

Oklahoma State was ending a nine year bowl drought of its own, and came out with some momentum. The Cowboys managed an early field goal, but Billy Dicken put Purdue out in front with an 18 yard pass to Brian Alford for a 7-3 lead after one. I wonder sometimes how high Dicken would have been drafted if he had been able to play another year or two in Tiller’s system. As it was, Dicken had one of the best season’s in school history, but his records were quickly eclipsed by Drew Brees over the following few seasons. Still, Dicken’s 1997 season was a thing of beauty, as the senior stepped in and took the early reigns of coach Tiller’s offense to light up the Big Ten.

Both teams managed just a field goal in the second quarter, but it was Adrian Beasley that quickly made a difference. Beasley, who at the time was the author of the most famous play in Purdue history (which we will visit later), had a pair of interceptions in the game. His first set up Alford’s touchdown, and Shane Ryan connected on a second quarter field goal so Purdue would 10-6 at the half.

To start the second half it was Beasley again. Beasley’s second interception came on Oklahoma State’s first series of the second half. He was able to return it all the way to the six yard line and Dicken finished the job with a 1 yard touchdown plunge. Shane Ryan missed the extra point, but that would prove to be moot. Three minutes later Oklahoma State would get close again with a 21 yard touchdown run by Jamaal Fobbs. His score made it 16-13 Purdue, but that is as close as the Cowboys would get.

While the defense had made several big plays to this point, once Purdue got the ball back it was the offense’s turn. A 60-yard catch and run by Edwin Watson set up a 16 yard reverse by Vinny Sutherland to make it 23-13. Purdue got a stop, and needed only three plays to get in the end zone again. This time Chris Daniels, who as we will see in a game later on in this countdown would eventually set an NCAA single-game record for yards the next season, had a 69 yard catch and run for a touchdown. With 3:52 left in the third Purdue was up 30-13.

This was more than enough for the defense. The Boilers never let Oklahoma State threaten when it mattered again. Purdue would add another field goal by Ryan with 9:12 left in the fourth quarter to push the lead to 20. The rest of the game would be a celebration as the Boilers notched their first win in a bowl since the 1980 Peach Bowl. The Cowboys managed a touchdown by R.W. McQuarters with 55 seconds left, but it served to only make the score closer.

As we know, this was the first in a series of 10 bowl games the Boilers have played in during Tiller’s first 11 years. We would go on to win another Alamo Bowl before losing six of the next seven bowl games. At the time, it was a big win and a great way to cap a season that few people saw coming. We would finish 9-3 and have the best turnaround in the country after a 3-8 record in 1996. Joe Tiller also ended up winning several Coach of the Year honors, while a number of Boilermakers such as Brian Alford saw their names called on draft day. It seemed like the culture of the entire program had changed overnight, and that is exactly what we needed.

Dicken closed his career at Purdue with a fantastic encore, throwing for 325 yards on just 18 completions and a pair of touchdowns. Despite three interceptions he took home game Offensive MVP honors, as he added 43 yards and a touchdown on the ground. His 325 yards passing would set an Alamo Bowl record. Watson didn’t find the end zone, but he finished with more than 100 yards receiving from his running back position.

Honestly, this game seems so long ago that some of the details are forgotten. As we will see over the course of this countdown, two more victories from that season stand out a little more. Still, it was a big win for the program and marked the highest we would finish in a final season poll under coach Tiller. At the time, everyone was thoroughly pleased with anything Joe did. He could walk on water and move mountains as far as we were concerned because he had turned us into a winner. It is interesting to see how the perspective of the fan base has changed in 11 years. It’s a good thing that we are no longer merely satisfied with making a bowl game, but at the same time we got so good so quickly that Joe may have become a victim of his own success. It’s hard to say how things would be viewed differently had we had a slow build up to respectability instead of a sudden surge, but I will take the sudden surge over more years of suckatude any day.