Share All sharing options for: Best wins of the Tiller Era #6: Michigan State 1997 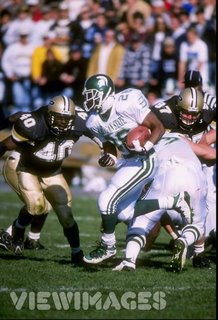 Like Wisconsin last week, we get a double dose of the Spartans on the countdown of the best wins of the Tiller Era. I honestly could have included a number of other games against Michigan State, as wins over the Spartans in 1998 and 2006 were both exciting games that came down to the wire. It seems like Michigan State is the one team that we manage to snatch victory from the jaws of defeat on a regular basis. That is why this is their third appearance on the countdown. The 22-21 victory over them in 1997 was exactly that type of game.

On the GBI message boards the other day this game was actually specifically mentioned when I wrote about the Oklahoma State game. It seems like everyone remembers it because it was likely the second most memorable game from that first season under coach Tiller. It has long been a fan favorite because of the dramatic way in which the Boilers won after playing so poorly for most of the game. It ranks sixth in the countdown, having been the first game to really break away from the previous games with nine votes.

I have a sad confession to make, and I am sure it will lower my esteem in the eyes of many Purdue fans. My high school is weird in that we have our prom in November instead of the traditional spring date. It was that way when my sister was in high school in the late 80’s and it was still in early November when I was in school in the late 90’s. During the 1996 season I was a junior and had to miss the winning touchdown during our shocking win over Michigan so I could make it home in time to get cleaned up and get to the house we were having pictures at. To make things worse, it was a blind prom date and my date was a Michigan fan. Since the first words out of my mouth that night were, "I can’t believe you guys made me leave the Purdue game early and miss us beating Michigan," the evening didn’t start well. Fortunately, we at least became good friends once it was all over.

For this Michigan State game, fate would have it that it was once again prom night. I attended the game with my brother-in-law, and once again left early when Drew Brees threw what appeared to be the clinching interception. It certainly looked like a loss since the Boilers were behind by multiple scores, and I had to get home. Sadly, we were in the car when everything happened, and considering that I wasn’t all that excited about prom in the first place and I spent more time that night talking to my previous year’s date, it was a decision regret. I wish I had stayed in the stadium.

Michigan State flat out-played us for 58 minutes, but ended up losing. That is the best way to sum this up. Almost nothing went right for the Boilers. We were still in contention for the Big Ten title, but it looked like it would end in this game. In the end we weren’t going to win it since Michigan went on to win an undefeated national title, but we didn’t know that. We already knew that we were going bowling, and people were beginning to dream that maybe, just maybe, 1997 would end the long Rose Bowl drought. A disappointing loss to Iowa the previous week was a setback, but there was still hope.

Michigan State was struggling, but they were still a dangerous team. They had started 5-0 but this ended up being their 4th straight loss, proving not just John L. Smith could ruin promising starts. Nick Saban was just as qualified. Their defense was dominant the entire day as our offense struggled to get anything going. It appeared that we were in for a grind it out type of game when Sedrick Irvin scored in the first quarter to give Michigan State an early 7-0 lead. Just about the only way we could get any kind of movement was through trick plays.

In yet another element I miss from the early Tiller years, the Boilers used some innovation for its only touchdown of the first three quarters. Chris Daniels got the ball on a reverse early in the second quarter and found Brian Alford down the sidelines for a 33-yard tying touchdown. The pass was Daniels’ first of his career, and was the offensive highlight of an otherwise dismal day. All told Purdue barely managed 300 yards of total offense, and much of that came on the frantic final drive for the win. We also threw a pair of interceptions on the day.

On Michigan State’s next drive the Spartans went right back down the field to quickly regain the lead. Marc Renaud capped the drive with a 20 yard run to give Michigan State a 14-7 lead going into the half. As well as their defense had played to that point it appeared to be a safe one as well. I am not lying when I say that the only time Purdue did anything in the first half was on Daniels’ trick play. Other than that we seemed to have an endless string of three and outs.

The third quarter was scoreless, but Lee Brush got Purdue back in business with an interception late in the quarter. A six minute drive got all the way to the Spartan three yard line, but Purdue could only manage a Shane Ryan field goal. Though it was a small victory, Octavis Long quickly took it away with a 65-yard touchdown pass from Todd Schultz. Michigan State led 21-10 with little more than 10 minutes left.

Purdue couldn’t get anything going, so we pulled Dicken in favor of Brees. Brees as a freshman was definitely not Brees as a senior, and when Aric Morris picked him off at the Purdue 26 yard line with 3:47 left we headed for the exits. We figured that Michigan State was already in scoring range, and they could methodically run out the clock or pound the ball into the end zone for a 28-10 lead. It was over.

Someone forgot to tell Purdue’s defense. They engineered a stop and Saban decided to try a 39-yard field goal. Leo Perez broke through for the block and Roosevelt Colvin picked it up and returned it all the way for a stunning touchdown. This happened just as we got to our car and turned on the radio in the Northwestern Street garage. Sure, we could have turned around and ran back to the stadium, but after missing the two it was still 21-16 and there was no way we would go the onside kick. Thus we took off for Kokomo, and I cemented my status as on idiot.

Daniels, who showed enormous patience in waiting for the ball to go exactly 10 yards, recovered the onside kick and we were in business. Dicken came back in and completed four straight passes to the four yard line before Edwin Watson punched it in with 40 seconds left. At this point we were passing Sunnyside Middle School and I felt like banging my head against the dashboard. I couldn’t believe this was happening for the second year in a row and I resolved to never leave another game early unless we were down a lot more. This would apply to turning off the TV too, and it came in handy for the 2001 game at Minnesota.

Now it was Michigan State’s turn for a panicked drive, and they actually put one together. We had gone for two again to make it a three point lead and failed, so they had a chance. A 25 yard completion to Gari Scott put the ball at the Purdue 33 with 14 seconds left. Purdue committed a penalty and Michigan State centered the ball at the 25 with seven seconds left. Chris Gardner would attempt another field goal, this time from 42 yards out with the game in the balance. Gardner must have always wanted to kick for Florida State, because his game-winning attempt wasn’t even close. It sailed wide left and Purdue had the win in the one instance where icing the kicker worked.

Staying at the game would have been much better than the prom, as my best friend left the dance early and I unfortunately wasn’t that into my date. I ended up in a smoky Waffle House at 4am with my previous year’s date and a group of friends. When I finally got to watch the highlights they were pretty fun to watch, as the students got to storm the field for a second time. The Perez-Colvin play almost supplanted Adrian Beasley’s fumble return in the Notre dame game as the most memorable play of that season. Since I missed the Penn state game due to a weekend college visit to Bradley it was also the last game I got to attend that year.

We ultimately did not win the Big Ten, finishing in a second place tie with OhioSstate and Penn State. We finished the year by beating Minnesota, losing to Penn State, and annihilating Indiana before the Oklahoma State win in the Alamo Bowl. Michigan State went on to play in the Aloha Bowl that season, so it was a good win over a bowl team.

As stated, however, the win set a precedent that I would never leave a game or turn off a game even when it appeared Purdue had no chance. That would hold true until the 2005 Notre Dame game when I was so furious with our play I stormed out at halftime. Of course, as bad as we played in that first half we could have been down by 3 and still have no chance.

This win almost made the Minnesota win in 2001 (which I should have included in the countdown) seem routine. No one remembers the stats or that Watson finished with a 100 yard day. All anyone remembers is that we snatched a victory away from certain defeat. Who can ever forget Roosevelt Colvin lumbering downfield with a convoy of blockers behind him, or how Brock Spack called his shot? Michigan State fans will also remember did it the next season as well, scoring two touchdowns with the aid of a blocked punt in the final minutes for another stunning win. I like Michigan State fans, but they have to hate us now.

And on to the video, with several clips simply because the game was that incredible...