Share All sharing options for: Best wins of the Tiller Era #5: Michigan 2000 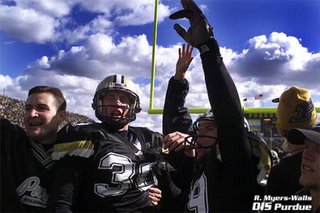 Before getting into the top 5 of the countdown I have a special addendum to yesterday’s entry on the baseball program. They are not the only story that has developed on the northwest side of campus this spring. An even better story has developed a couple hundred yards further west. Yesterday the NCAA pairings for women’s softball were released, and for the first time since the program began in 1994 the Lady Boilermakers received an invite to the NCAA Tournament. Their path will not be easy, as they are being sent to the Los Angeles regional as the three seed to face Nevada Friday in the opening game. Fourth seeded Cal State Fullerton is also there, and the Titans already own a win over Purdue this season. The final team is just #2 overall national seed and 10-time NCAA champ UCLA. Needless to say, advancement won’t be easy, but it is still a watershed moment in Purdue athletics. Congratulations to the ladies, and good luck on Friday.

Second, I also wanted to post this link from Everyday Should be Saturday. It’s for a great cause, and we should BTFU for it.

Today we finally get to the top five in the countdown, and with 21 votes the 32-31 victory over Michigan during the 2000 is an appropriate introduction. This was an incredible game, and still marks the only win Tiller has collected over the Wolverines. Coach Tiller has multiple wins over programs like Ohio State, Notre Dame, and Penn State, but he has only been able to conquer the Wolverines once. Even then, this victory almost didn’t happen. A near superhuman defensive effort in the second half allowed a dramatic comeback when we couldn’t even come close to stopping Michigan in the first half. The win also gave us the tiebreaker over Michigan for our eventual Rose Bowl berth.

This was absolutely a must win game for Purdue. We had dropped a heartbreaker the previous week at Penn State and couldn’t afford to lose to one of the conference favorites. Travis Dorsch was in the dog house after missing another huge kick, this time one that would have made a difference in the loss to the Nittany Lions. With two close losses on the road already the season certainly did not look like it was going to be as special as once hoped.

Michigan came in with one visit to the Rose Bowl already under its belt. On September 16th of that season Michigan lost 23-20 at UCLA, but a 2-0 start had them as the favorites for a potential return to Pasadena. Drew Henson was going through one of his rare stints of actually committing himself to football, and was having a pretty successful time in doing so. They were heavily favored coming in, and I was not expecting a happy birthday. That weekend was Fall Break for Purdue, but several students stayed for the Saturday game. It was five days before my 21st birthday, so even if we won I couldn’t legally celebrate at Harry’s just yet.

This was a tale of two halves. Michigan looked every bit of being the #6 team in the country during the first half. The Wolverines touched the ball four times in the first half, and four times they put it in the end zone. The first drive was an unstoppable march as Michigan took the opening kickoff and went 82 yards in 12 plays, taking more than nine minutes off the clock. Marquise Walker ended the drive with a seven yard touchdown catch, but Purdue was able to answer with a 17-play field goal drive to make it 7-3 after one quarter.

Michigan’s second drive was more of the same. This time the Wolverines went 80 yards in 15 plays, taking seven more minutes off the clock before B.J. Askew scored on a 4-yard pass from Henson. Purdue then drove inside the Michigan 20, but Drew Brees was picked off in the end zone to end the Purdue threat. Michigan then made the most of the mistake as Anthony Thomas broke off a 61 yard touchdown run on the following possession to make it 21-3 with 6:25 left in the first half.

Purdue didn’t quit, as Brees led an 80 yard drive downfield for the Boilers first touchdown of the day. This score went to Vinny Sutherland, who changed directions on a dime and scampered to the end zone for a much needed score from 25 yards out. With 1:50 left Purdue had cut it to 21-10, but the defense still had not arrived. Michigan returned the favor by marching 89 yards in 1:39 to score again, this time when David Terrell scored on a 15 yard pass from Henson. Michigan would lead 28-10 at the half, and the defense appeared to have no interest in stopping them.

Fortunately, Purdue played a nearly flawless second half. Purdue’s first drive resulted in a much needed score as Brees directed us down field flawlessly. In less than four minutes we were in the end zone thanks to Steve Ennis’ one yard rush, but the two-point conversion attempt would fail. Purdue was back in it, and most importantly the defense would finally get a stop on Michigan’s next possession.

After a Wolverine punt Purdue took over at its own 20 and went 80 yards in 13 plays for another score. This time it was Montrell Lowe who finished the methodical drive with a bouncing 16 yard run up the middle. Twice on the drive Brees completed third down passes to keep things alive. When Dorsch made the extra point Purdue had trimmed the lead to 28-23 in just under 11 minutes.

Purdue managed another stop, but was pinned inside its own 10 by a Michigan punt and could do nothing. Purdue punted it back to Michigan, who managed to drive just 8 yards, but it was enough for them to kick a 34-yard field goal with 11:55 left. From there it was Brees’ turn to shine again.

Once again he directed the Boilers on an 80 yard drive, this time in 12 plays before finding John Standeford for a 10 yard score. The decision to go for two early came back to haunt us, as another two-point try failed and we trailed 31-29.

This is when the defense really began to shine. They forced a three and out to give Brees the ball back with 4:52 left at the Michigan 48. It was the perfect scenario, as we needed very few yards to get into field goal range. He did just that, but Dorsch would draw the ire of the student section by missing a 32 yard attempt with 2:11 left. Now Michigan needed only a first down to ice the game.

Fortunately, the defense continued its stellar play. They stuffed two straight running plays and used a pair of timeouts to stop the clock each time. Henson then threw a third down incompletion, and Michigan had to punt after holding the ball for a mere 30 seconds. Brees took over at the Purdue 41 with no timeouts and 1:41 left.

What followed was one of the best drives of Drew’s career at Purdue. He opened things with a 10 yard run for a first down, then completed four of five passes to the Michigan 21. The Wolverines then gave us five additional yards with a penalty, and Purdue took two plays to center the ball at the 17 before Brees spiked the ball to stop the clock with 8 seconds left. Michigan called timeout to ice Dorsch as he came on to kick from almost the exact spot he had missed minutes earlier.

During the timeout I remember turning to those around me in the fifth row of the student section and saying one thing. I said, "After this play we’re going on the field to do one of two things: either celebrate a great Purdue win or kick his ass for missing another big kick." That got quite a few nervous laughs, and we all settled in for the kick. This time Dorsch was good, barely sneaking it inside the left upright for the win with 4 seconds left. Michigan did nothing on the kickoff and I rushed the field for the first time as a student.

Once Dorsch’s kick went through it was sheer chaos in row 5. Everyone was jumping and screaming, and I barely remember watching the kickoff. I didn’t even see the infamous double middle-finger salute that Dorsch gave us. Since I had never rushed the field before I didn’t know exactly what would happen. The rush was tentative at first, but it soon turned into a flood of humanity that pushed me over the railing and onto the field. Within seconds there were about 20 students on the north goal posts, including one gentleman in a Spiderman costume that had managed to bring in a wrench. He was furiously trying to loosen the bolts on the goal posts and bring them down, so I quickly got out of the way before they landed on my head.

Another enduring image was that of tight end and Mackey Award winner Tim Stratton hanging from the goal posts with the others. Tim was a bit of a partier back in the day, and he was having such a great time that he misplaced his helmet. This put him squarely in Tiller’s doghouse for the following week. Had the helmet not been returned by an anonymous fan later on he probably would have been suspended for the next game at Northwestern.

In this game Brees broke the Big Ten career record for touchdown passes and Mark Herrman’s school record for passing yards. He finished with 286 yards passing and two scores while also rushing for 80 more yards. Lowe finished with 130 yards on the ground and Vinny Sutherland had 127 yards on 11 catches. It was also the first time we had beaten Michigan, Ohio state, or Penn State under coach Tiller. As mentioned previously, it would come in very handy as it gave us the tiebreaker over Michigan for the Rose Bowl. It would be needed.

I think this is the game where we truly began to believe that the Rose Bowl was in reach. The Penn State game took a lot out of us, but this huge come from behind win brought the dream right back to life. We grabbed two important wins at Northwestern and Wisconsin before the Ohio State game really put the hype into high gear. I also remember that this was a great day to be a student, and I did get a very nice birthday present from the Boilers.