Share All sharing options for: Best wins of the Tiller Era #4: Notre Dame 1997 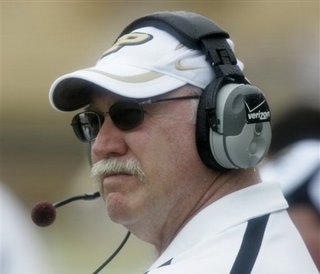 Today is a banner day for Off the Tracks. Today marks the 200th post since I started this blog just before the 2006 football season. In that time, I have seen my readership explode, became a member of the Big Ten bloggers’ network, and even turned a small profit on this venture. I have only you the readers to thank for this. For everyone who has stopped by, whether you have commented or not, I thank you for taking the time to read my vagrant rantings. You make this blog a fun thing to maintain each and every day.

I do want to ask my loyal readers, in lieu of sending me large amounts of cash, to instead visit Everyday Should be Saturday and donate to one of the charities listed in that entry. So far they have raised over $11,000 in aid to victims of the cyclone in Myanmar, the earthquake in China, and the storms in The Southeast. For today only, you can donate for the Boilers, or apply your donation against a rival like Notre Dame or Indiana. Right now Purdue sits in the Hall of Shame at just $25, but that is because I split my donation evenly with Miami. Let’s Boiler up and get off the Hall of Shame list before 8pm today!

Our next game in the countdown is the win that started it all. On September 6th, barring an absolutely shocking turn of events, Coach Joe Tiller will tie Jack Mollenkopf at 84 career wins for the Old Gold and Black. Sometime after that, probably before the conference season even starts, Joe will get his second win of the season and sit on top of the coaching wins list at Purdue all by himself. That is a pretty good accomplishment in 12 years on the sidelines, but coach Tiller probably wouldn’t still be at Purdue if not for the next win in our countdown. Coming in 4th with 43 votes is the 28-17 win over Notre Dame in 1997, Tiller’s first in West Lafayette.

It’s hard to believe, but before this day no one really knew who Joe Tiller was. An embarrassing 36-22 loss at Toledo to open the season had most Purdue fans thinking that Tiller was more in the realm of Fred Akers and Jim Colletto than the savior of the program. As usual, there was a good crowd on hand. Most of it was Notre Dame fans in one of our few guaranteed sellout games at the time. The Irish had beaten Georgia Tech in its opener by four, and it looked like there was a smooth transition from Lou Holtz to Bob Davie. Davie was the third new head coach for the three major programs in Indiana that season, as Indiana was starting anew under Cam Cameron. By far Davie was expected to have the most success.

Before this day we had not beaten Notre Dame since a 35-17 win at Purdue in 1985. Most of the next 11 games weren’t even close, including the previous year’s 35-0 beatdown in South Bend. That would serve as the last time Purdue had been shutout until the Penn State 2006 game. Purdue came close in 1995, but instead of throwing to a wide open Mike Alstott for a late tying touchdown we overthrew a receiver in the end zone, losing 35-28. A few Notre Dame fans (not completely representing their fanbase, I know) were being their overly arrogant selves even in the era where it wasn’t much of a rivalry. As my brother-in-law, his brother, and I went into the stadium we heard a cry of," hey, what happened at Toledo last week?"

Of the three of us, only my brother-in-law’s brother, Tharon, was a Purdue grad at the time. He had not been to a game, nor followed the program, in several years. Since my parents were on vacation that week both he and my brother-in-law came to the game with me. Brian and I were more than familiar with the state of Purdue football at the time, so we settled in for another grim beatdown. Tharon, however, was pretty ignorant. When Purdue took an early 7-0 lead on a touchdown run by Edwin Watson and actually held it for awhile, Tharon was overly optimistic. "They just might win this thing," he said. Brian and I laughed and waited for the collapse we knew was coming.

Notre Dame answered with a field goal early in the second quarter, but Purdue came back down the field behind Billy Dicken. When Watson scored again from a yard out to put us up 14-3 even Brian and I looked at each other with the, "what the hell is going on," look. Dicken was on his way to the best game of his career at that point. The offense, which often didn’t move at all under Colletto, was moving down the field with something called the forward pass. Best of all, the jokes about Colletto being on the other side of the field as Notre Dame’s offensive coordinator began flying. Tiller was smoking this guy with his own recruits, and we were loving every minute of it.

Autry Denson would score for Notre Dame before halftime from 16 yards out to make it 14-10, but that did not change our mood. Tharon was as excited as he could be. Brian and I were stunned, but we knew the collapse was coming. This was Purdue, after all. We never beat Notre Dame. In the second half they would start manhandling us and Ron Powlus would cause them to pull away for something like a 38-14 win or something. This was when Ron Pawlus was going through the final season of his Jimmy Montana-esque career, although I must say at least Powlus was better as a freshman and won a few games. He actually beat out other quarterbacks in spring practice for the starting job.

As the third quarter went on we grew more and more concerned. Purdue wasn’t scoring, but the defense was actually stopping Notre Dame. Both sides were scoreless for 15 minutes, and suddenly it dawned on us. We were 15 minutes away, and we just might beat these guys. Nothing happened in the first five minutes of the fourth quarter, so at least the clock was going in our favor. It kept moving and we kept getting louder and louder. Could this actually be happening? Then, with 8:50 left, the play we had been waiting for happened.

On second and five from the Notre Dame 39 Powlus dropped back to pass. Pressure forced him out of the pocket, but he had some running room in front of him so he took off. As he got back to the line of scrimmage he got hit from behind by Rosevelt Colvin and went down. From our seats in section 22 it looked like a sack, so we started jumping up and down thinking it was now third and long. A stop on the next play would give us the ball back and a chance to run out the clock.

It took me about 2 or 3 seconds, but I noticed the play was still going on. Adrian Beasley was running down the field with a convoy behind him, and the following slowly dawned on me and Brian at the same time. "Wait a minute… He has the ball! Beasley has the ball and he might score. HOLY SH** BEASLEY’S GONNA SCORE!!!!!! WE’RE GOING TO BEAT THESE GUYS!!!!"


I don’t think I fully got it until Beasley was at about the ten. Since the pessimism had not been thoroughly burned out of us Brian and I started looking for the flag. Surely there was a flag. Never mind that Tharon was screaming his head off. There was no flag, and Shane Ryan lined up to kick the extra point to make it 21-10.

Notre Dame managed a desperate drive to get another score when Denson caught a one yard pass from Pawlus with 1:47 left. Someone forgot to tell Denson that touchdowns were only worth six points, not 12, however. His emphatic spike of celebration resulted in a 15 yard penalty, pushing back the extra point try and negating any realistic chance of a two point conversion. Since no Jim Colletto coach team could gain more than 10 yards at a time, Notre Dame kicked the extra point instead of trying to cut it to three for a potential tying field goal.

Purdue then recovered the onside kick, and instead of running out the clock Tiller went for the jugular. Vinny Sutherland, who finished with 100 yards on the day and became an instant Purdue hero as a freshman, caught a 36 yard bubble screen to the three. With just over a minute left Kendall Matthews punched it in for the final score and a shocking 28-17 win.

I was a senior in high school for the 1997 season, and it was on this day, at this game, that I probably made up my mind to come to Purdue. I had offers to go elsewhere for more money, but I had always wanted to be a Boilermaker since my dad was a Boiler. Seeing the students rush the field that day and Purdue suddenly become relevant again helped me make up my mind. Three years later I asked my parents if I still could have gone to the Rose Bowl with them had I chosen to go to Bradley University, the other school I was weighing at the time. They looked at each other, then said, "We would have waived at you on TV."

We hung around the stadium soaking it in for several minutes. We wanted to find the Notre Dame fans that taunted us on the way in and ask them what had just happened in there. Brian got in severe trouble because we were late in getting back to Tippecanoe Mall to pick up my sister and nephew. He tried to explain what happened and that we had to stay because it never happens, but she was pregnant with my second nephew at the time and didn’t understand. Neither did Tharon’s wife. This is why I am glad I have a wife that loves college football as much as I do.

The loss started a four game losing streak for Notre Dame, who hadn’t even bothered to bring the Shillelagh with them. They struggled to a 7-6 finish after losing another bowl game, this time in the Independence Bowl to an LSU team they had already beaten at LSU. Of note the following week is that Michigan State started its current six game winning streak at Notre Dame Stadium with a 23-7 win.

As recapped before in this countdown, Purdue went on to a 9-3 finish, a win in the Alamo Bowl, and Tiller won National Coach of the Year Award for the stunning turnaround. The win felt especially good not because it came against the Irish, but because it came against Colletto. You can tell Jim was loved by the players when Watson had said earlier in the week that Colletto, "was used to losing here (Purdue), so it would be nothing new for him." It was also the moment that the Notre Dame Purdue series became a real rivalry again, and a win this year in South Bend would give Joe a final record of 6-6 against the Irish, much to the dismay of their fans that have trouble believing we’ve beaten them once.