Share All sharing options for: Best wins of the Tiller Era #3: Notre Dame 2004 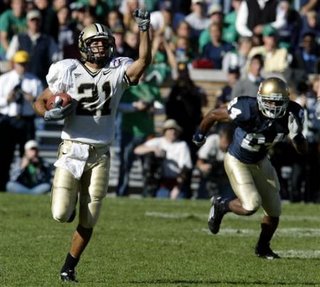 Before getting to the next game on the countdown I must offer congratulations to the Boilermaker softball and baseball teams. The softball team stayed a little bit longer than expected in the NCAA’s. They dropped their opener to Nevada 4-1 before defeating Cal State Fullerton 4-3 in a loser’s bracket game late Saturday night. In that game Purdue led 2-0 before giving up the lead on a bases loaded double in the sixth. The Boilers then added two more in the top of the seventh and held on for the win in the bottom of the inning for their first ever NCAA win. Unfortunately, their reward was a rematch with Nevada about a half hour later which started at 12:45am Saturday night. The Wolfpack won again 2-1 to eliminate the Boilers. Both Saturday games were nationally televised on ESPN 2, so it was at least one more chance for Purdue to be in the spotlight.

The Boilermaker baseball team also completed a 30-24 regular season by taking three of four against Illinois this weekend. Purdue finished the Big Ten season with a 21-10 record in the conference, setting a new school record for conference wins. That was good enough for a second place finish and first round bye in this week’s Big Ten Tournament at conference champ Michigan. The Wolverines (42-12 overall, 26-5 Big Ten) are the heavy favorites in the tourney, but they are already in the NCAA tournament most likely. The other five teams in the field need to win the auto-bid to keep their seasons alive. Purdue will play at 3:35 Thursday afternoon against either Penn State, Illinois, or Ohio State. Purdue won the series 3-1 against all three opponents. Against the other two teams in the field they lost the series to Indiana 1-3 and did not play Michigan.

That brings us to the third game on our list. With 47 votes it ranked just ahead of the 1997 game against Notre Dame, but the 2004 game against the Irish honestly was among the most fun games to watch on television. Since I can’t stand most Notre Dame fans, I simply refuse to go to South Bend to see a game. It really is for the best. The 2004 game was enjoyed by almost anyone who hates the Irish simply because of the way Purdue finally broke through after way too long of a drought in South Bend.

It had been 30 years since we had won in South Bend. It’s hard to imagine, but when Purdue won in 1974 over #2 Notre Dame my dad was in his fourth year of pharmacy school. He would graduate, have me, and I would graduate from Purdue before it would happen again. It is my sincere hope that I don’t have to wait for the same time to pass before the Boilers win at Notre Dame again in 2034. Most of those losses were blowouts, but under Tiller we had come close. Losses in 1998, 2000, and 2002 had me convinced we were truly cursed against the Irish. All three times we lost to inferior Notre Dame teams in "Luck of the Irish" fashion.

In 1998 Drew Brees needed only run out the clock, but two late interceptions allowed Notre Dame to take the lead 31-30, then run the clock out themselves. In 2000 we played a terrible game against the first Notre Dame team to earn an undeserved BCS bid, losing 23-21 on a last second field goal. Gary Godsey, a tight end playing his only game at quarterback, outplayed Drew Brees in that one making it even more frustrating. 2002 may have been the worst, when the Purdue defense held Notre Dame to three points but two fumble returns for a touchdown and an interception returned for a touchdown were enough for a 24-21 win. We were wondering what we had to do to finally beat these guys.

Fortunately we came into this one on a roll. Kyle Orton was lighting up defenses all over the place and, aside from the Illinois game, our defense was playing well. We had outscored Syracuse, Ball State, and Illinois 148-37 in the season’s first three games. Meanwhile, Notre Dame had dropped its opener at home to BYU before beating Michigan, Michigan State, and Washington. Brady Quinn was starting to become Brady Quinn even without Charlie Weis’ offensive genius.

This was a lot of fun to watch, and if I could get a copy of it today I would watch it over and over. Purdue took the opening kickoff and had a very successful opening drive. The Boilers moved 63 yards in 10 plays before Ben Jones split the uprights for a 31 yard field goal. Notre Dame answered with almost the exact same drive. With 6:30 left in the first quarter the Irish tied it on a 26 yard field goal. That is when the first of many big plays on the day started to break Notre Dame’s spirit.

On the ensuing kickoff Jerome Brooks received the ball at the goal line and took off. The blocking formed a perfect seam and Brooks used a spin move to bounce off a tackler and get into the clear at the 22. He went the rest of the way untouched with Bernard Pollard out in front to block anyone who got close. It was the type of score we always needed at Notre Dame.

Both teams then traded punts before Notre Dame made its next mistake. The Irish missed a 44 yard field goal and Purdue responded with a drive for another 3-pointer to make it 13-3 with 11:24 left in the half. Notre Dame then had its best drive of the day by going 77 yards in 14 plays to get down to the three just before halftime. It appeared that the Irish were going to bulldoze their way into the end zone and cut the lead to three, but Anthony Spencer made a huge play. Spencer stripped Darius Walker at the goal line and Brent Grover recovered at the three to end the threat. Notre Dame would get nothing from their drive and like it.

I’ll give credit to Purdue on its next drive. Getting the ball at our own three even after a fumble is difficult. With 4:39 left in the half Orton took over and drove all 97 yards in 11 plays for a dagger of a touchdown. The best play of the drive came on a halfback pass from Brandon Jones to Ray Williams down to the two. Defensive end Rob Ninkovich then caught a short touchdown pass to make it 20-3 at the half.

It was at this point that I unfortunately had to leave my house and miss the second half of the game. I was making TV commercials in Kokomo at the time, and I unfortunately had a rare Saturday evening shoot that day which meant the rest of the game would have to be listened to on the radio. As much as I enjoyed making that commercial for Bunker Hill drag strip, listening to the second half and getting paid overtime to do so was more fun.

Notre Dame’s first drive of the second half ended in a punt that pinned us back at the Irish three. After a pair of incompletions Orton lofted a pass to Taylor Stubblefield that the receiver caught, broke a tackle in single coverage, and ran down the sidelines celebrating. It’s like every Purdue fan was running with Taylor when he did that, because we all wanted to do what he was doing. The frustrations of our last three visits were washed away on that play. The silence and stunned looks on the Notre Dame sideline were more than worth the 15 yard penalty Taylor received. It was our second 97-yard touchdown drive in a row and second play of 95 yards or more.

Notre Dame responded by finally getting into the end zone on a 40 yard TD pass from Quinn to Rheema McKnight, but their defense had no chance of stopping us. Orton seemed to make sure personally that we weren’t going to blow another one, as he needed only five plays and 56 yards to get it back. Dorien Bryant had a 56 yard catch and run to set up a nine yard scoring pass to Kyle Ingraham to make it 34-10.

The Irish would score again on their next drive, but failed to get the two-point conversion. Purdue then drove for its final touchdown of the day when Stubblefield put the final points on the board with a 12 yard TD catch. Purdue led 41-16 after three and put it in the hands of the defense the rest of the way. They allowed a pair of drives into Purdue territory, but stiffened to force a turnover on downs each time. Spencer, Ninkovich, and Ray Edwards made the day a living hell for Quinn, combining to sack him seven times. In the end Quinn threw for 432 yards and no interceptions, but it was perhaps the most useless 400 yard passing day in college football history.

Orton finished with 385 yards and four touchdowns to raise his season total to 17 scores against zero interceptions through four games. This game put him in the driver’s seat for the Heisman until That Play happened two weeks later. It also raised Purdue into the top 10 nationally, where we would get our only win as a top 10 team under Tiller in game #11 on this countdown.

I’ll give credit to Quinn in this game. He barely had any time to throw but still had a successful game as just a sophomore. I have been one of his detractors before, but seeing what he did behind a terrible offensive line for four years is quite impressive. This was the first game in which he really made a name for himself. He would go on to lead the Irish to a 6-6 season and a loss to Oregon State in the Insight Bowl.

As a fan it didn’t get much better than this. After all the snide comments and condescension we had finally gone into their house and flat out annihilated them. We put to rest everything bad that had happened under Tiller in South Bend. We also set a hopeful precedent that we can indeed win there. With any kind of a defense we could have won again in 2006, and we certainly at least have a chance in 2008 after Notre Dame’s debacle last year.

It doesn’t matter that the second half of the season in 2004 was terrible. The first half was one of the most memorable in program history. It is only appropriate that finally winning in South Bend after 30 years was part of it.