The futility of Spring football

Share All sharing options for: The futility of Spring football 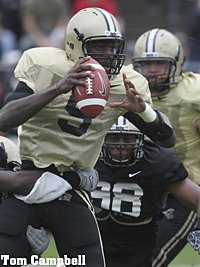 There are both positives and negatives that can be taken away from Spring football. For football starved fans, it can be free entertainment on an otherwise dull Saturday afternoon in central Indiana. I don’t have a family truckster like Boilerdowd, nor a family to truck up to West Lafayette, but because we slept in too much and got up to late to make it to Cincinnati for an MLB game we decided to head to West Lafayette for the day. I may get in trouble with my readership for the spring game not being my priority destination for the weekend, but today is my wife’s birthday. She is a big baseball fan, so the prospect for seeing former Hurricane Ryan Braun play in Cincinnati was her first choice of weekend activity.

While the spring game can be entertaining, the only true thing that comes out of it is the opportunity to practice and develop depth. Most spring game statistics should be taken with a grain of salt simply because they are incredibly skewed. The first team is often playing against the second team on the other side of the ball, and both sides are not playing at full speed in order to avoid any major injuries. In Purdue’s case, so many guys were out with injuries that will be there in the fall that an even less accurate assessment can be done.

Of course that doesn’t stop our friends in South Bend from going way overboard about Jimmy Montana. I guess completing 10 of 27 passes against a defensive unit that couldn’t stop the French army last season is certainly taking command of the starting quarterback position. This is especially so when the next studly recruit isn’t even there yet and Jimmy was probably competing against a waterboy and a peanut vendor. Keep throwing those game winning TD’s in events that aren’t even games, Jimmy. He could still become a quality quarterback for the Irish, but let’s all calm down a little bit before enshrining him in Canton. Conveniently omitted from the above article is Jimmy’s error in throwing a touchdown to the wrong team that led to an internal scuffle. Of course, if the Notre Dame defense can pick off the great Jimmy Montana and hold him to just 10 of 27 completions we may be seeing the second coming of the 1985 Bears. You stay classy, Irish, by getting in fights and earning unsportsmanlike conduct penalties. It’s okay because it is just the spring game and you’re "showing emotion".

Sorry for the rant there, but I only list those links simply because they illustrate the absurdity of spring football. It is absolutely wonderful that teams can get in some extra practice and work on a few things instead of being dormant for 8 months, but in reality that it is all it is. Performing against your own guys in a spring game ultimately is not a good indicator of how well a team will perform in live competition simply because of the desire to avoid injury and the first team vs. second team issue. Still, there were some positives yesterday, but it the above conditions make it harder to see the negatives. Only the World League of American Football, t e XFL, and NFL Europa play meaningful games in the spring, and they are all dead.

At least it is an afternoon of entertainment and I got a visit to Harry’s and Lovshack out of it.

Positives from the Spring game:

Ken Plue – I was excited because I saw his size on paper, but after seeing him in person yesterday I was blown away. This dude is a freaking house! I cannot wait for Danny Hope, a proven offensive line coach after putting all five starters from the Rose Bowl line in the NFL at one point or another, has a chance to develop him. If Plue can play at all he is going to be the anchor of our offensive line for the next four years based on size alone. Since we’re so decimated by injuries right now spring practice will certainly be a plus for him since he enrolled early.

Jared Crank – He looked pretty good yesterday, and I would like to see us use him as a bit of a change of pace back. I know Halliburton is ahead of him on the depth chart, but if we can use Halliburton more we can use Crank more. At the very least it looks like we have five solid running backs with Dierking, Taylor, and Sheets in addition to these two. Hopefully we can use some two back sets as a surprise because no one expects us to.

Tight Ends – This is an area where we lost an awful lot because of one guy. We’re not going to replace a player like Dustin Keller right away. This area is also still a little open with Jordan Brewer still roaming the halls of Carmel High School. Colton McKey and Jerry Wasikowski had a couple of nice catches, and one of Wasikowski’s in particular, a deflection off of a defender, showed a lot of focus.

Wide Receiver depth – The blessing in disguise of having both Orton and Tardy out for the spring is that we got plenty of reps for receivers we will need to step up in the fall. Aaron Valentin’s catch in the fourth quarter was quite impressive, but I want to see it in a real game. Keith Smith ran some pretty good routes and appears to have finally found a home. I’d love to see Joe Whitest develop, and at the moment I would put him at the #5 receiver in a five receiver set. We should have a pretty good front line, and there will be chances for others like Gravesande, Muhammad, Whittington, Williams, and the incoming freshmen to contribute. How about T.J. Barbarette as well? The dude is only 5’6" and looks like he would struggle to make a high school team, but he’s tough as nails.

Linebacker depth – This is another area where we needed to have a good spring with the players available, and appears we did so. Green, Werner, and Heygood are serviceable starters, but for rotation and potential injury purposes we needed to have a couple more guys step up and show they can play at least a little. Haston’s instincts in pass coverage are good, but he needs more size. Mike Conway was all over the place, but his pick six came against a mere mortal and not Jimmy Montana, so it can be ignored. John Humphrey had a pretty good day as well, but I really wish we would bite the bullet and move Jeff Lindsay back to linebacker. We need the depth and he is a badass in my NCAA Football ’08 game.

Priorities for the summer:

Get healthy – I can file this one under the category of "well, duh". Since you only have 22 starters and we were potentially missing 12 of them due to injury yesterday, it is pretty obvious that we need to get healthy. We’re not going to have a successful season unless we can get all of these guys back. The two biggest areas are getting both Erwin and Williams back because we really took a big step back defensively when we lost them in successive weeks last year. We could also use an offensive line, especially since blocking is just a little important in a passing game.

Work on Justin Siller’s mechanics – I like the kid’s athleticism, but his throwing motion sucks. Thank goodness we’re not rolling the dice with him full time this season. I like the idea of using him in spots, but his arm is simply not ready to run our style of offense. He gives us some great options with his feet. Yesterday he ran the option very well and instinctively knew when to kept he ball and when to pitch. Elliot is definitely the better thrower at the moment, but platooning Siller just a little this year could set the stage for a more regular platoon with Elliott and Siller in 2009. It will be a luxury next season to have a quarterback step in that has had at least two seasons to learn the system.

Get stronger – I liked what I saw from the defensive line yesterday. It looks like we’re going to have a pass rush from multiple angles, and hopefully our defensive tackles can be run stoppers while the linebackers develop. If our line can have a good year I think our defense could really surprise. We certainly have enough experience in the middle.

Develop receivers – Painter is only going to be as good as the guys he is throwing the ball too. Hopefully he can find time over the next few months to work with as many guys as possible. I think it is a benefit that we don’t really have an established #1 guy, as our offense has always run better when we have had multiple targets. Remember, Seth Morales was the fourth option on the greatest play in Purdue history. Vinny Sutherland was always Brees’ top target, but Morales, Stratton, and Standeford all got plenty of looks. That could be us this year with Orton, Tardy, Valentin, and Adams. If the defense can’t key on just one guy (cough, Dorien Bryant, cough) we’re very dangerous.

Again, I don’t think you can take too much from yesterday. Event eh good performances we did have came from guys who may barely play in the fall because of getting all the starters back. Playing Northern Colorado will tell us a lot more simply because we’ll have everyone back and we’ll be playing at game speed. Both sides of the ball are also handicapped a bit because in a spring game the have a very good idea about what is on the other side of the ball. At least when facing someone else, even a bad team like Northern Colorado, there is an element of surprise and reaction that isn’t there in a spring game.

We only have four more months until we find out.