Share All sharing options for: Best wins of the Tiller Era #9: Wisconsin 2000 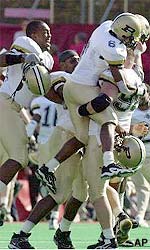 We return to the scene of our last game today in our countdown. The Purdue-Wisconsin rivalry had a series of very interesting twists between 1999 and 2004. In that time the Boilers and Badgers only played four times due to the Big Ten schedule rotation, but in those four games we had a series of incredibly entertaining games that often came down to the final play. In that four game stretch the visiting team also won each time. In 1999 Ron Dayne won the battle of Heisman trophy candidates by running for 222 yards and a pair of touchdowns as Wisconsin won 28-21 in West Lafayette. The teams did not play in the 2001 or 2002 seasons, while the 2003 game was recapped as game #10 on the countdown. Finally, we all know what happened in 2004, so it shouldn’t be spoken of here. The fourth game on that list, Purdue’s 30-24 win in Madison during the 2000 season ranks ninth on this countdown of best wins under Joe Tiller.

Wisconsin was struggling a bit coming into this game. They had completed a 3-0 non-conference schedule with wins over Western Michigan, Oregon, and Cincinnati. The Oregon win was especially good, as the Ducks were at the top of a very good Pac-10 all season long and were a top 10 team that season. Once the Badgers got into Big Ten play, however, the loss of Heisman trophy winner Ron Dayne became more apparent. Wisconsin lost three straight games to Northwestern, Michigan, and Ohio State before finally breaking through against Michigan State the week before this game. Our win over them would prove to be their final loss of the season, as they rolled through Iowa, Minnesota, Indiana, and Hawaii before winning the Sun Bowl over UCLA to finish a respectable 9-4.

I remember watching this game at my sister’s house with my brother-in-law. It came just nine days after my 21st birthday, so I was in a good mood. We did not get off to a good start, but neither did Wisconsin. This was a rare scoreless affair for us after one quarter, but Wisconsin struck first in the second when Jim Sorgi found Chris Chambers for a 28-yard touchdown strike very early in the second quarter. To that point Purdue had only had the ball for nine plays and amassed 31 yards, but that would end shortly.

Drew Brees then took over at the 23 yard line and drove the Boilers 77 yards in 12 plays in just under five minutes. A.T. Simpson, who was one of the more unheralded but very good receivers for Drew, scored from 30 yards out to tie things up with 9:37 left before the half. It only took a minute and eight seconds, however, for Wisconsin to regain control. Sorgi hit Chambers for gains of 11 and 31 yards before Michael Bennett rushed for five and 33 yards to finish the drive. The Purdue defense barely knew what hit it, and Wisconsin would take a 14-7 lead it would hold until the half as the teams traded punts the rest of the way.

It was clear that Purdue needed a spark, and as usual it was Brees that provided it. Purdue got the opening kickoff of the second half at the 20 after a touchback and the Boilers moved the ball on the ground as opposed to through the air. Montrell Lowe had a big 40 yard run during the drive, but it was Brees that capped it with a six yard touchdown run to tie things again at 14. Brees actually rushed for 20 yards on the drive to go with 45 from Lowe.

Wisconsin managed a lengthy drive that netted three points on a 35 yard field goal from Vitaly Pisetsky, but Purdue’s big-strike capability came through two plays later. In a preview of what would be the greatest pass in Purdue history, Brees found none other than Seth Morales for a 78-yard bomb down the middle of the field for a 21-17 Purdue lead with 5:40 left in the third quarter. Watching Drew Brees throw the deep ball is one of the things I remember most about his time in West Lafayette. We saw his pump fake passed on to Orton, as seen in the last article, but it truly was a thing of beauty. This pass, while not as high as the one from the Ohio State game, is almost of equal importance but it is sometimes forgotten because it occurred on the road. Also, the play to end this particular game was much more dramatic, which makes even more people forget Morales’ catch. The play also gave Drew the Big Ten record for passing yards over Iowa’s Chuck Long.

Once again the teams traded a few punts and Purdue was unable to do anything with an Akin Ayodele fumble recovery at the end of the third period near midfield. With 7:56 left in the game Purdue finally broke the scoring drought when Dorsch connected on a 44 yard field goal to make it 24-17. The kick came after a lengthy drive that saw Drew use his legs again, this time with a 25 yard run on the first play of the drive. All told Drew would finish with 74 yards rushing on 11 attempts to go with 274 passing, two touchdowns, and no interceptions. When you add all that to his rushing touchdown earlier, he didn’t have too bad of a day.

After Dorsch’s field goal the Boilers sent the defense out to close the deal. The defense blew it like Eric Gagne is blowing saves for the Brewers this season. Sorgi directed the Badgers on an 8 play 62 yard drive for a tying score. John Sigmund caught a five yard Sorgi pass on 4th and 1 to tie the game up with 3:50 to play. Neither team was able to generate a scoring drive in the final 3:50, as Purdue had two chances to Wisconsin’s one. We were headed to overtime for the first time in school history.

I am a big proponent of college overtime. I think it makes games incredibly interesting and I love how each side gets a chance. It is certainly better than the NFL, where the luck of a coin toss can determine the winner. In this game Purdue won the toss and elected to go on defense. While the defense struggled on Wisconsin’s final scoring drive, there was no such thing in the overtime. After Purdue stopped Wisconsin’s first two plays from the 25 things got worse for the Badgers. A false start backed them up five yards before Ayodele sacked Sorgi for a loss of 10 on a high snap. That gave the Badgers 4th and 25 at the 40. It was too far for them to do anything realistic except attempt a 58 yard field goal.

Attempting a kick that long always carries a risk of a block because the trajectory is normally very low. As Pisetsky lined up to kick most Purdue fans felt confident that he would miss on the insanely long attempt and only a field goal would be needed on Purdue’s possession. Travis Dorsch, however would not get his chance at redemption from the Penn State miss on this day. Craig Terrill busted through the line to block Pisetsky’s attempt with his chest, causing me to jump off the couch. Purdue’s fortunes would get even better as the bouncing ball went directly to a streaking Ashante Woodyard. Woodyard picked the ball up in stride, high stepped one last ditch tackler, and raced to the end zone for a Boilermaker touchdown in front of a completely stunned Badger crowd. Woodyard was barely touched until tackled by his own teammates in the end zone celebration. If not for that, he may have simply ran up the tunnel into the locker room while the crowd stood in silence.

My brother-in-law, for reasons unknown to this day, had decided to mow the lawn while listening to the rest of the game. After wildly celebrating inside the house I ran outside to exchange high-fives and general stupidity with him. This was a huge win for the Boilers. As big as the Michigan win had been a few weeks earlier, it was this win that set the stage for the unforgettable Ohio State game the following week. We had to come back at multiple times in this one. That is a lesson that would certainly come in handy against the Buckeyes. Seeing as how both the Michigan and Ohio State games were barely won like this one, we came dangerously close to not even qualifying for a bowl in this season. Instead, we had that rare killer instinct and turned it into one of the most memorable seasons in the history of the program.

As mentioned above, Wisconsin finished the season a respectable 9-4. They had also barely lost games to Michigan, Ohio State, and Northwestern, meaning they were an exceedingly dangerous team. We had not won in Madison since 1988, so the Badgers were shocked that Purdue of all people had come into their house and beat them. The very next semester I had a class where I was assigned a long-term Group project with Ashante Woodyard’s girlfriend. I remember meeting him when he came to pick up their daughter at the library and I thanked him personally for the return of that blocked kick.

Ironcially, this was one of Brees’ worst games in terms of total yardage and completions against Wisconsin. Drew set the NCAA record for pass attempted two years earlier in Madison, but threw four interceptions in a loss. In the 28-21 loss at Ross-Ade in 1999 he had three more interceptions, including a backbreaker that was returned for a touchdown by Jamar Fletcher. Drew really grew up in this game. He didn’t light up the scoreboard, but he managed the game very well. That is why we were able to finally beat the Badgers under his watch. Even then, he wasn’t even involved with the winning play.