Share All sharing options for: Best wins of the Tiller Era #15: Indiana 2004 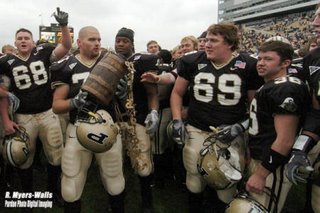 The votes are officially in and today I can begin the countdown of the top 15 victories of the Joe Tiller Era. For those of you unfamiliar with Purdue football here is a quick recap. Joe Tiller is preparing to enter his 12th and final season as head coach of Purdue Boilermaker football. His 83-54 record is far from overwhelming, but he stands just two wins short of setting a new school record for wins as a head coach. Tiller is also responsible for 10 of Purdue’s 15 bowl appearances and only its second Rose Bowl appearance ever. Coach Tiller has accomplished much at Purdue when previously very little had been done.

Today we look at what the voters and I chose as the 15th best win of his first 11 years. All told four games received just one vote, so the tie means I get to editorialize a bit here. We kick off this new segment before I head to the MIA tomorrow with Purdue’s 63-24 win over Indiana to close the 2004 regular season.

The Hoosiers were mired in yet another losing season, but had showed some promise by gaining a shocking win over Oregon in Autzen Stadium earlier that year. The Big Ten schedule was not kind with only a win over Minnesota, but the Gophers were a 7-5 bowl winner that year. That win turned out to be bigger than the Oregon win, as the Ducks, who were ranked 24th before facing the Hoosiers, finished 5-6 and had their only bowl-less season since 1996. Indiana had proven to be competitive in several games under Gerry DiNardo, losing one possession games to Penn State and Illinois just before this one.

Purdue was on a bit of a down note. We were mere weeks separated from the The Fumble game against Wisconsin. A win over Ohio State the previous week had ended a four game losing streak, but a season that was once full of such promise had an empty feeling as the Hoosiers came to town. After being mere inches away from being in the driver’s seat for the Rose Bowl, and possibly even more, those four losses had us fighting for bowl eligibility. Neither the fans, nor the players were in a good mood before this game, but it was a chance to send accomplished seniors Kyle Orton and Taylor Stubblefield out on a high note.

Like an angry man playing Grand Theft Auto, we vented in this one. Indiana never stood a chance.

I selected this game as one of the 15 to vote on because, as a fan, it was one of the most fun games to watch of the Tiller era. We have blown out Indiana numerous times over the past 11 seasons, but rarely have the blowouts been this thorough. Purdue was able to do what it wanted to, when it wanted to offensively from the game’s first snap. Very little went right for the Hooisers, and the only reason the score wasn’t worse is because Purdue actually had several gaffes that prevented an even wider margin of victory. There were at least two dropped passes by wide open receivers that would have been first half touchdowns. Will Lumpkin even had a 74 yard fumble recovery for a Hoosier touchdown that ended another Purdue scoring drive. None of that mattered though, as Purdue racked up an astounding 763 yards of total offense.

Let’s look at that number in some perspective. Those 763 yards topped the previous school record for total yardage by 71 yards. It was also the highest number of yards put up by any offense in any Division 1 game during that season across the country. Orton threw for a then school record 522 yards and six touchdowns. The yardage record was topped by Curtis Painter in this past season’s bowl game, while Painter tied the six TD’s against Eastern Illinois. The 63 points also marked the first time we put up 60 or more in a game since 1913. In this game we often scored without even trying!

Purdue was not using long drives either. Six of the nine Boilermaker touchdowns came from more than 20 yards out, and three of those came from our side of the 50. Stubblefield found the end zone three times for a school record 15 receiving touchdowns on the season. He also set the NCAA division 1 record for most career receptions in the first half. Purdue led 21-3 after one quarter and 42-10 at the half. Since those two dropped touchdowns and Lumpkin’s fumble return also came in the first half you could say the Boilers were incredibly close to a 63-3 first half beatdown.

Orton and Stubblefield were hardly the only Purdue players that had good days. Kyle Ingraham caught 11 passes for 109 yards and a pair of touchdowns. Dorien Bryant showed a ton of freshman promise with 131 yards receiving, 62 rushing, and a touchdown each way. Amazingly the defense had a very quiet day. They only forced one turnover and allowed just one score, a field goal, when the game was still a game.

Naturally, things weren’t quite as good for Indiana. I remember talking with a member of the media after this game that was also an Indiana fan. We were both covering the same high school game and he mentioned he had been in the press box that day. As the game got worse and worse for the Hoosiers the IU athletic director became more and more incensed. All the progress that the Hoosiers had made under DiNardo had quickly gone out the window. He was fired after the season, which was only his third in Bloomington. The member of the media that I had spoken to said that this game was a large reason why.

Impact on both teams:

This was a monumental Purdue win not just because we were so dominant that we forced our rivals to fire their coach. It was also the last time under coach Tiller we have had such a dominating day against a conference opponent. It was fun to see us go out there, even after a long losing streak, and flat out kick another team’s ass. This was not Indiana State or Eastern Illinois. This was a team that had shown some improvement over the season. The Hoosiers actually had some good wins for once, and their record wasn’t as indicative as their talent level.

Though DiNardo was fired not too long after the game it turned out to be a blessing in disguise for Indiana. The move allowed them to hire one Terry Hoeppner. Say what you will about the guy, but he actually accomplished quite a bit in his short time at Indiana. He at least changed the attitude of the team and got them pointed in the right direction. I am not going to make fun of what Indiana did last season simply because we have been exactly where they were. The only difference is that for us it was 1997 while they had last year.

The biggest loss from this game for Indiana was the transfer of BenJarvus Green-Ellis. Green-Ellis had just completed a very promising sophomore campaign for the Hoosiers and looked to be on the verge of something special. He transferred to Mississippi after this game and ran for 2,000 yards and 13 touchdowns in his final two years of eligibility. To say he would have made a difference when Indiana came up one game short of a bowl with no running game in 2006 is not a stretch.
Final Box score:

After the game for Purdue:

As was our style at the time, we followed this game up with another crushing loss against Arizona State in our third Sun bowl in four years. Against the Sun Devils we either acted like we had never seen a screen pass before, or we stopped playing because we didn’t believe it was a legal play. 2005 was what is was, and we haven’t had as dominating of a day against a Big Ten opponent since. In fact, we haven’t even been close. It is somewhat depressing to see that this was the most recent game played on the list of 15, as our 21 wins since aren’t even remotely as good. At least for this day we were absolutely unstoppable.


More From Hammer and Rails