Share All sharing options for: Best wins of the Tiller Era #14: Michigan State 2002 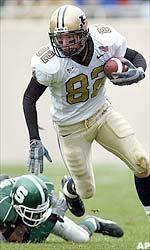 Some of you may have noticed there was a new article briefly up last night. Having returned from the vacation from hell I was greeted with the news that Scott Martin was leaving the Purdue basketball team for reasons not entirely known. Vacations are supposed to be relaxing. This one, however, was a nightmare. We were forced to change hotels and stay with a friend for four nights when our original hotel turned out to be a dive. Calling the place ghetto would be a compliment. Our rental car was hit by another car in a parking garage, but since we weren’t present at the time we may have to pay the deductible on our insurance. Finally, our flight was delayed more than 3 hours returning home, causing us to miss our connection in Detroit. These were the big things that went wrong, in addition to hundreds of little things. As a result, I was not in the best of moods when I sat down to write last night.

What came out was a very vengeful and mean spirited article that called Scott Martin on the carpet. I basically attacked Scott for leaving Purdue for what I deemed were stupid reasons, even if those weren’t the real reasons for his departure. Some loyal Boilermaker fans called me out in this regard on the Purdue board, and they were right.

That is not the type of writer I want to be here. When I saw I was losing the respect of several readers that I had worked so hard to gain I decided to take the article down. It was not right of me to attack a 19-year-old kid who is probably very confused about his own life at the moment just because I had a bad week. For that, I apologize. If there are members of the Martin family that happened to see the article in question (it was only up for about 2 hours), I also apologize to you as well. I wish Scott nothing but the best in whatever he decides to do. Should he change his mind and return to Purdue, I also welcome him with open arms. If not, I thank him for his contributions this past season.

With that out of the way we can move on to our second installment of the Best wins of the Tiller Era. As mentioned in the first installment, four different games garnered just one vote. This allowed me to choose the order of games 12-15. While the Indiana game in 2004 was just a good old-fashioned butt kicking, it really had very little riding on it. Game #14, the Michigan State game from 2002, was the complete opposite.

Many remember the 2002 season one of the most agonizing ones in school history. The Boilers led the conference in both total offense and total defense, but struggled in every close game. All six losses came by a touchdown or less, and each seemed to come in a different fashion. A shocking non-conference loss against Wake Forest came as a result of Montrell Lowe fumbles and atrocious kicking by Berin Lacevic. In South Bend, Purdue held the Irish to just 3 points offensively, but allowed three turnovers to be returned for scores. At Illinois on my birthday the Boilers rallied from down 24-0 to lead 31-24 with 8 seconds remaining, but gave up a 4th down touchdown that should have never happened. I was at the game and the play was in front of me. The Illinois player’s knee was down before he broke the plane. John Standford’s Hail Mary catch then broke the plane just as much, but Purdue got hosed again before losing in overtime. There were also close losses to Michigan (2 points) and Iowa (3 points) before Holy Buckeye occurred a week before this very game.

When the Boilers traveled to East Lansing that cold, blustery day we couldn’t even settle on a starting quarterback. It was an elimination game, as the winner would still have a chance at a bowl game while the loser was done. I settled in on my couch to watch as the woman who would eventually become my wife was with me for her first ever Purdue game on TV (she had attended Holy Buckeye the week before on one of our first dates).

Nothing was easy for Purdue in 2002, and this game was no different. Six lead changes and one tie had me alternately dancing in celebration or cursing at my TV. A blocked extra point early in the second half would prove to be key as both teams started to chase points with two-point conversions way too early. All told Michigan State passed up three points on either blocked PAT’s or missed 2-pointers, and that was the difference in a 45-42 loss.

To say Purdue was inconsistent is putting it mildly. Less than two minutes in Michigan State was on the board with a 49-yard field goal. Two minutes after that Joey Harris gave us a lead on a 25 yard touchdown run. Despite the score and the way things started, defense would play a role in this one. DeMario Suggs and Thomas Wright each had long interceptions they returned for touchdowns as Brandon Kirsch, the day’s starter, threw four interceptions. He made up for it by rushing for 125 yards and a score, but in the end it was a miserable day for Brandon.

David Richard gave Michigan State a 10-7 lead after one period before Suggs’ pick six made it 17-7 with 9:05 left. Purdue responded by scoring the final 17 points of the first half. Standford answered a minute and a half after Suggs’ score with a 41 yard touchdown catch. The Boilers then tied it at 17 on the rarest play of all: a made field goal by Lacevic. Kirsch scored his touchdown from 6 yards out 38 seconds after Berin’s field goal thanks to an Antwaun Rogers interception. That gave Purdue a 24-17 lead at the half.

The second half was even more wild. Brent Grover recovered a fumble deep in Purdue territory to stop Michigan State’s first drive, but the Boilers quickly had to punt. Michigan State then went 38 yards in 6 plays, the last 16 on a Damon Dowdell to Charles Rogers touchdown pass. The extra point, however, was blocked, setting up strategy for the rest of the half as Purdue led 31-30. The extra point may not have been blocked had the Spartans not been flagged 15 yards for celebrating the touchdown.

Purdue answered with a 77 yard touchdown drive, but Michigan State then needed just 1 play to respond itself with a 65-yard bomb to Rogers. This meant Purdue led just 31-30 going into the fourth quarter. The lead was short lived, as Wright picked off Kirsch and returned it 65 yards for a touchdown on the first play of the fourth quarter. Purdue was on its heals and it appeared we would have only ourselves to blame for yet another close loss.

It was then that two of the craziest plays in Purdue football history saved the season and Purdue’s bowl streak. Both came from the old Joe Tiller, showing the gumption to go for it on fourth down. Having already converted on 4th down twice in the game, Tiller went for it on 4th and 4 from the MSU 33 with 11:22 left in the game. I guess he figured that Lacevic was going to miss any field goal anyway, so why not go for it? As seen in one of the two plays below, Kirsch scrambled away from the rush and found Anthony Chambers for a touchdown that surely had me running around the living room whooping it up. A throat slash by Chambers to celebrate meant our own 15 yard celebration penalty, and Lacevic didn’t disappoint by missing the PAT. Perhaps he wanted to make up for not getting to miss the field goal.

Michigan State answered with a 10 play, 75 yard drive to take a 42-37 lead on a David Richard touchdown run. Their two-point attempt also appeared to be good, but a holding call brought it back. The second attempt was no good, and Purdue was able to get the ball at its own 34 with 7:32 left. Most Purdue fans remember the play that ended this drive, but credit must be given to our offensive line for getting us into position for Orton’s heroics.

It’s frustrating to know this has happened before with the current staff, but Purdue went conservative and actually ground out the clock while driving for the winning score. Brandon Jones and Joey Harris kept the ball and clock moving with runs down to the 42, while Kirsch nearly gave us all heart attacks by fumbling on 1st down from the 42. He recovered his own drop at the 40, however, and threw incompletions on the next two plays. On the second throw Kirsch was hit and knocked out of the game, meaning Kyle Orton, who had stood on the cold sidelines all day doing very little, had to come in on 4th and 8 with 3:25 left and save the season. The Michigan State crowd was in a frenzy, and Orton was not as mobile as Kirsch had been all day.

Purdue held back five to block, but just before the snap you can see Orton audible for his second slot receiver, I believe it is Brandon Jones, to move over and pick up the blitz. Jones did a great job of at least delaying two guys, giving Orton just enough time to find Standeford in single coverage down the sideline for a 40 yard TD that was every bit as clutch as Brees to Morales, maybe more so. Taylor Stubblefield caught the two-point conversion and the defense held on for the win. Standeford would finish with 136 yards on five catches with 2 TD’s

After the game for Purdue:

Perhaps the most important result from this game is that Purdue found itself a starting quarterback for the remainder of the 2002 season, as well as the next two seasons in Kyle Orton. This allowed Orton to be an early Heisman candidate in 2004, and has him in the NFL today. Kirsch started the next game against Indiana, but struggled before Orton came in to have a great day. Kirsch would not start ahead of Orton again until injuries forced him into action against Northwestern and Iowa in 2004.

The win also allowed Purdue to finish the season by regaining the bucket in a 34-10 romp over Indiana the following week. The Boilers were rejuvenated and Brandon Jones had perhaps his finest day as a Boiler with 131 yards and two touchdowns against the Hoosiers. Purdue would make it three in a row with a Sun Bowl victory over Washington to have its best finish to a season in the past eight years.

In the grand scheme of things, beating Michigan State accomplished very little. It did, however give Purdue enough confidence to crawl into a bowl and win it. It also set things up very well for 2003. That Boilermaker team may have been the best overall team that Tiller ahs had at Purdue. I would argue it was better than the 2000 Rose Bowl squad simply because it was more balanced on both sides of the ball. The defense was the best of the Tiller Era and gained a lot of confidence from the stop at the end of this Michigan State game. That 2003 team was a handful of plays from a 12-1 overall, and much of that can probably be owed to the resiliency shown in this game.