Share All sharing options for: Best wins of the Tiller Era #12: Indiana 2000 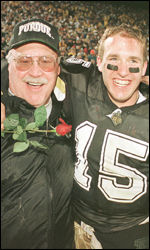 The final game that received just a single vote in our countdown was a bit of a surprise. Of the four choices that received a single vote this one, in my estimation, was clearly the best. I was actually surprised it didn’t receive more votes and crack the top 10. Though Off the Tracks is a benevolent dictatorship, there are roots in democracy. Therefore, we have the 12th game on our list and 4th game to be reviewed: The 2000 game against the Indiana Hoosiers.

In my previous entry on the 1997 Wisconsin game I mentioned how that specific game against the Badgers awakened my father’s dream of one day seeing the Boilers play the Rose Bowl. Since my dad is far from a big sports fan, it is pretty significant that he wanted to travel so far to see a football game. This is a guy that came to only a handful of my basketball and baseball games growing up, and I’m his only child. While that Wisconsin game awakened this long time dream, the 41-13 win over Indiana is what clinched it.

As the game announcer said on the final play, we had waited a lifetime for this game. As much as we had accomplished that season, however, the atmosphere coming into this one almost didn’t happen. We had two thank you we needed to send out before this game to Anthony Thomas and the Iowa football team. A week after beating Ohio State in the famous Brees-to-Morales game we received an added bonus of Northwestern upsetting Michigan 54-51 in a game that Lake the Posts (a belated thank you, by the way, for the countdown idea) rated as 4th best in Northwestern history. I remember watching that game at Damon’s in Kokomo and seeing Thomas inexplicably drop the ball without being touched after he had already gained the game-clinching first down. Northwestern recovered, had a second life, and ended up winning the game. This was astounding, especially since Thomas was Michigan’s all-time leading rusher until Mike Hart passed him this year. Thomas simply dropped the ball, and without it Michigan would have been in yet another Rose Bowl with just one conference loss (to us).

We had a bye that week, and it was a bad thing. We followed it up with an ugly 31-10 loss in East Lansing to Michigan State that was nothing short of disastrous. Fortunately, lowly Iowa, Which was just 2-8 overall before the game, upset Northwestern 27-17 on senior day in Iowa City. Iowa had lost games that season to Western Michigan, Indiana, Iowa State, and Illinois, but came out of nowhere to shock the fellow Big Ten leader. As a result, Michigan, Ohio State, Purdue, and Northwestern were all tied atop the Big Ten standings with two losses instead of Northwestern being out in front all alone with one loss. Since the Boilers had already defeated the Buckeyes, Wolverines, and Wildcats head-to-head we were saved from our gaffe against Michigan State. Owning the tiebreakers made the equation simple before the Hoosiers came to town. No matter what anyone else did, all we had to do was beat the Hoosiers and we were going to Pasadena.

Going into the stadium that day you could feel it: there was no freaking way we were losing this game.

Indiana had only beaten Cincinnati, Iowa, and Minnesota coming into this one, with Minnesota being the best win of the group. They also had Antwaan Randle El, one of the best players in school history and a guy who would give us fits a year later. The Hoosiers had been in a few games during the season to show they had some talent, but they were the unfortunate recipients of Michigan’s wrath the week after the Wolverines collapsed in West Lafayette. Michigan trounced the Hoosiers 58-0, but Indiana lost games to Illinois, Penn State, Kentucky, and North Carolina State by a touchdown or less. They were bad, but competitive. In a rivalry game, where they could ruin our dreams and little else, that made them dangerous.

Of course, they would have been dangerous in any other atmosphere. In Ross-Ade that day we could have probably played the 1985 Bears to a game. We had our third straight late home kickoff, and it was Drew Brees’ final game in West Lafayette. Brees was loved more than any Purdue athlete I have ever seen, and received the rare honor that day of every fan getting a towel with his name and number to salute his accomplishments. Not only did we have the incredibly rare opportunity to clinch the Rose Bowl, but we were also sending off one of the most celebrated alumni in school history. More than 65,000 Purdue fans were ready to bleed that day if it meant Purdue would win. We were NOT going to let them lose, and it may be the only time where I have felt a Purdue crowd be that determined.

Though it was Brees’ final game, Montrell Lowe stole the show. As was his style, Drew was more than happy to let someone else do the work and receive the glory as long as the team won. Indiana was completely unprepared for Lowe, who ran for 208 yards and four touchdowns on 38 carries. Many of his carries came on the same play, a simple handoff up the middle, but Indiana just couldn’t stop it. As a running back, it was probably the best individual day by any back under coach Tiller. Even more impressive is that Lowe did not have the size and dominant power that Mike Alstott had. He would score the first touchdown of the game on a 12 yard run about 10 minutes in and add three more in the second half as Purdue salted the game away.

Drew’s numbers were modest compared to what we were used to from him, but with the way Lowe was running we didn’t need him to throw for 450 yards and four touchdowns. Drew threw for 216 yards, ran for 85 more, and had both a touchdown passing and rushing. He was very efficient with just nine incomplete passes and one interception. His touchdown pass went to Tim Stratton, who would go on to win that season’s Mackey award as college football’s best tight end.

Indiana was able to hang around for most of the first half and only trailed 13-7 when Brees scored on a two yard run with about two minutes to go in the first half. The second half was all Montrell Lowe. Lowe scored two of his touchdowns in the third quarter and gave the Boilers a 34-7 lead. Indiana cobbled together a touchdown drive early in the fourth quarter, but Lowe clinched things with his final touchdown at the 9:50 mark. What followed was a 10 minute celebration as everyone anxiously watched the clock tick away.

Lost in this game was the performance of the Purdue defense. They had struggled for a good portion of the season and we often had to rely on the offense to simply outscore teams. Though Randle El cracked 100 yards rushing, he gained most of them by running for his life from a fierce pass rush. The secondary picked him off three times, two of them coming from Stu Schweigert as the freshman began his growth as a fan favorite. One of his picks was a memorable mistake, as he never took a knee in the end zone and non-chalantly flipped the ball to the turf before a teammate fell on what was a live ball. It was one of the very few on the field mistakes Stu had at Purdue. Indiana struggled all day to get anything going, and credit goes to the defense for making sure this one wasn’t even close.

Where do I begin? With 6:50 left Drew Brees left the field for the final time as a Purdue Boilermaker to a standing ovation that will not soon be topped in West Lafayette. From my seat in the fifth row of the student section even the incredibly drunk girl slobbering all over herself couldn’t distract from my joy of the game. Basically, it was a four hour joy-session capped off with everyone mobbing the field for the third straight home game.

If you have never had the opportunity to storm a football field in joy I must say that you have missed out on something in life. Since I was in the fifth row it was our responsibility to make sure it happened. Against Michigan we were somewhat tentative, but it still happened. Ohio State was more spontaneous. This Indiana game was different. After Lowe’s final touchdown we didn’t care what else happed. We just counted down the minutes and seconds until we could be unleashed. Once Brady Doe caught the game’s final pass for a game-ending interception it was on. Everyone was pushing behind me and soon I was over the railing and running full-tilt to… well, I don’t really remember. It was a rare moment in life where everyone just wanted to run in unabashed joy with their hands in the air. Strangers hugged strangers, people were crying tears of joy, and no one wanted to leave. I never tried to get on the goal posts, but I remember being on the field when we were presented with the Big Ten trophy and the formal invitation to the Rose Bowl. Somewhere in that mass of humanity we also had the Bucket, decorated with Roses for just the third time in its history. The scoreboard said it best with a simple picture of the Rose Bowl and the words, "Look out California. Here come the Boilermakers!" The steam whistle was blown so many times I think it ran out of steam.

It was easily one of the top 10 happiest moments of my life.

Going back to my father for a moment; when I finally met up with my parents after the game I saw a smile that I rarely saw from him. He would indeed fulfill his promise, as he couldn’t even wait to drive back to Kokomo. He had me looking up flight and hotel information on the computer at my apartment as they were driving back to Kokomo. He had booked our trip that Monday and, sure enough, I found myself sitting in the north end zone directly behind the goal posts with foam hammer in hand as the Boilers took on Washington. To this day I don’t care that we lost the game and I spent a ton of money to go see it. The fact I was there was enough for me. How could I have missed the spontaneous cheer when Roy Johnson, as a surprise to many Purdue fans, took the mic and simply said, "I am an American" to begin the pre-game? Even though the Boilers lost, the Rose bowl was a celebration and a vindication for all the Purdue fans that had suffered through Akers and Colletto. We’ve had better overall teams (I personally think the 2003 team was Tiller’s best), but this was special. This was our moment to celebrate, and I don’t care that it took a 3-way tie in one of the Big Ten’s weakest years to get it. It was ours, and no one can take that away from us.

This Indiana game was more than just a typical Bucket Game. It was the game that allowed us to experience this dream of being in Pasadena. After going to this past season’s Bucket Game in Bloomington and seeing them celebrate a mere bowl bid reminded me of the 2000 game, and I actually envied them for a moment. It didn’t matter to them that they had barely squeezed into a low bowl they would eventually lose. For once they weren’t "Indiana", and that is all that mattered. When we beat Indiana in 2000 to go to the Rose Bowl we weren’t just "Purdue". We were champions.