Share All sharing options for: Best wins of the Tiller Era #11: Penn State 2004 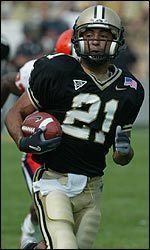 Today we reach the first multiple-vote game in the countdown. After having four straight games that received a single vote, the next three games each received just two votes in the poll. Once again, I get to use my editor’s prerogative to choose the order in terms of importance. The common thread among the next three choices is that they were all road wins in very hostile venues. One could easily say they are the toughest three road wins of the Tiller Era, especially considering that among the games in the top eight, only one came in a true road venue. That game being the 2004 win at Notre Dame. Based on how poorly the Irish faired in 2004, the next three games were probably much harder for Purdue to come away with a victory, and the final margins in each game show that level of difficulty.

Ultimately, of the three choices for the #11 spot on this countdown the 20-13 Penn State win from 2004 was probably the least significant. So far it marks the only time in the Tiller Era that the Boilers have walked into a 100,000+ seat stadium and walked away with a victory. Barring an absolute miracle this year in the Horseshoe, it will likely remain so as well. The other two games were better wins over better teams in the two best seasons under Tiller.

Purdue and Penn State have an interesting rivalry. Of the three programs with 100,000+ seat stadiums in the conference the Boilers have had the most success against the Nittany Lions. In almost every game under coach Tiller Purdue has been competitive against Penn State, but we have also blown several good chances to notch quality wins. In 1999 we had a really good chance to beat them at home when they were unbeaten and ranked second in the country, but missed field goals and a late fourth down stop prevented that. A late missed field goal in 2000 prevented another Boiler win in Happy Valley, while the Boilers dropped another close one last season. It is a fairly friendly rivalry, one of good football and good harmony between the fans. Some good friends of ours are Penn state fans and they actually came to the game with us in 2006 at Purdue. They were welcomed at our tailgate and even extended an invitation to see the Boilers play in Happy Valley some time. I also know a pair of friends from grade school that have undergraduate science degrees from Purdue and graduate degrees from Penn State.

The 2004 game had plenty of hype surrounding it. The Boilers were on a roll, having crushed Syracuse, Ball State, and Notre Dame in addition to a closer than it should have been win at Illinois. Kyle Orton had yet to throw an interception against 17 touchdown passes and was one of the early front-runners for the Heisman. The Penn State game was our third straight road contest, and it had been 24 years since we had won three straight away from Ross-Ade in one season. It had been longer still since we had started a season 5-0, as that streak dated back to 1945. There was also the buzz that a win would mean a potential visit by College GameDay to West Lafayette, an honor that was robbed from us during the 2000 season when we were leading the voting nationwide for the show to visit for the Michigan game. Penn State was down, but they are always a tough out at home, especially when a top 10 team comes to town. Purdue had a lot riding on this game, and for once we actually came through.

Purdue never trailed, but Penn State made us earn this one. It was clear from the beginning that points would come at a premium, as Penn State’s defense came to play. Purdue played the field position game, turning a short punt and a good return by Taylor Stubblefield into three points when Ben Jones hit a 50-yard field goal midway through the first quarter. The fact that Jones connected twice from 45 yards or more was a huge reason we were able to win this one.

After a few more punts Purdue put together one of its best drives of the season for a touchdown and a 10-0 lead. The Boilers went 86 yards in 7 plays in a little more than three minutes. Charles Davis had a huge 55 yard catch and run on the drive to get us in scoring position and Brandon Jones capped the drive with a two yard run.

Penn State answered with a drive of its own. We helped them with a 15-yard personal foul penalty on the ensuing kickoff, and the Nittany Lions went 62 yards in six plays to cut it to 10-7. Ben Jones would then miss a 51 yard field goal and Penn State would tie it on a 38-yard field goal with 24 seconds left the half. Penn State had taken the momentum back and had the crowd behind them as they headed into the locker room.

Purdue got the ball to start the second half and responded with a longer drive for a touchdown. This time the Boilers went 80 yards in eight plays, but the last 40 yards were covered on a long pass to Stubblefield as he sneaked inside the pylon for a score. It took just four minutes for Purdue to take the lead for good, but it was far from over.

The Boilers’ next drive stalled, and Penn State put together a lengthy drive for what was looking like a tying touchdown after Penn State got a first and 10 at the 16. The Purdue defense held on 2nd and 1 from the 7 and forced and incomplete pass on third down. Penn State had to settle for a short field goal, and Purdue had gained a major victory. Unfortunately, on the very next drive Purdue had some things going before Calvin Lowry picked off Orton near midfield. It was Orton’s first pick of the season, which whipped the Penn State crowd into a frenzy since it came on the first play of the fourth quarter.

Penn State then drove all the way down to the Purdue six, but on fourth and five from the six Paterno elected to go for the go-ahead touchdown rather than settle for a field goal. Stanford Keglar stuffed Zack Mills at the three to give Purdue the ball back as Penn State left morepoints on the field.

The momentum was very short lived, as Orton was intercepted again two plays later. Fortunately, this interception came on a long bomb of a pass. Anwar Phillips intercepted Orton at the Purdue 42, but we had the ball on the one yard line anyway, so it was as good as punt. The Purdue defense rose to the occasion once again, as it forced a stop and Robbie Gould missed a 45-yard field goal with 8:22 left.

Once Purdue got the ball back we showed uncharacteristic poise in the face of a very loud home crowd. We managed to hold on to the ball for 11 plays and move 44 yards in more than five and a half minutes. Dorien Bryant had an absolutely huge 17 yard catch and run on 3rd and 14 to keep the drive alive near midfield. Jones then capped the drive with one of the most dramatic field goals of his career, a 46-yarder that made it 20-13 with just 2:48 left. At that point it looked like Purdue was facing overtime at worst, and with the struggles Penn State had in moving the ball a win seemed highly possible.

Penn State acquiesced to our wishes by throwing four straight incompletions after a great kickoff return, but Purdue couldn’t gain a first down and had to punt the ball back with a minute to play. Penn State got as far as midfield, but Anthony Morelli’s fourth down Hail Mary fell short as time expired and Purdue had the win.

At the time, this felt like a ground-breaking road win for Purdue. It was also the second such win in a row since we had walloped the Irish in South Bend a week before. It was the first time we had ever won in Happy Valley, and the first time since a shocking upset at Ohio State in 1988 that we had won at one of the biggest venues in the conference. The win propelled us to our highest ranking in decades, as we spent a week at #5. College GameDay did indeed come to town for the following Wisconsin game and we enjoyed a week of rare Heisman and National Title hype.

Personally, it was a glorious week, as my wife’s Hurricanes were also highly rated and we began to entertain thoughts of a potential national title match between the two. We weren’t even engaged yet, but we shared season tickets for the first time that season. It certainly looked like it was going to be a memorable season. All signs now pointed to a two game stretch against Wisconsin and Michigan. Both games were at home, and a win in both would all but seal the Big Ten championship. Ohio State loomed later on down the road, but we had survived the tough road tests. The remaining difficult games were all at home, and every Purdue fan dared to dream.

Of course, we all know what happened to that dream. It reached a pinnacle with a 10 point lead and just 8 minutes to play against the Badgers. Less than half an hour later it was all over. The Fumble happened, Ben Jones missed just his second clutch kick ever (the first coming the previous year at Ohio State), and a four game losing streak sent us from the national title to the Sun Bowl.

This win over Penn State seems so long ago now, but it was the last time we were able to get a big win anywhere. We have played three seasons since, and the rare plateau we reached after beating the Nittany Lions now seems so far away. I don’t know if we can even get back there, and I feel robbed and empty for only having it for one short week. There have been a few very brief teases, specifically the start of the disastrous 2005 season, but for the most part we have been nowhere near that place since.

Still, for one week we were the talk of the college football world. For one week we were nationally relevant and controlled out own destiny for greatness. Yes there are 120 major college football teams in the country, but you can almost instantly eliminate half of them from the national title discussion simply because of the conference they play in. Of the remaining half, only about 15-20 have a realistic shot each year of winning it all. Very rarely are the Boilers in that select group, so it was very nice to have it for one week.

We will always wonder what would have happened had Orton not fumbled against Wisconsin. It is refreshing to know that when I watch the highlights of this Penn State game it was the last time we had no knowledge of that fumble. That is why this game makes the list.