Share All sharing options for: Best wins of the Tiller Era #10: Wisconsin 2003 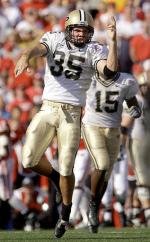 It’s been a busy week here at Off the Tracks with this being the fourth post in the heart of the offseason. At least it keeps me busy, plus I get to talk about college baseball just a little as the season begins to wrap up.

In relation to that, I urge you to go support the Boilers at home this weekend against Minnesota. Purdue has only been to the NCAA Tournament for baseball once, in 1987. Right now they are in the middle of one of the better seasons in school history and deserve your support. They have won every Big Ten series thus far, and a series win this weekend will put them in an excellent position to finish in the top two in the Big Ten. That may not seem like much, but a top 2 finish means a first round bye and they would only have to win three straight to get an automatic bid to the NCAA’s.

Now we move on to the first game in our top 10. This game tied with the Penn State 2004 game and one other game, but I ultimately put the Wisconsin game from 2003 here because of the way the Badgers finished the season. Both this and the #9 game on the countdown were critical road wins in the two biggest seasons under Tiller. The #9 game, however, came against a team that ultimately finished with a better record. Wisconsin only finished 7-6 in 2003, so that docks this game slightly. Still, it is definitely one of coach Tiller’s better wins.

I can’t remember where I watched this game on TV, but it was one of the more entertaining games I have ever had the pleasure of watching. I do remember it was the week before my then girlfriend, now wife moved to Indiana, and I needed a boost after her Florida Marlins tragically ended the Cubs run to the World Series. I had an opportunity to actually go to this game with some friends, but I turned it down and instead went a few weeks later when they decided to go to Ohio State. That was a bad decision.

One quick bad omen: College GameDay was there that day, a precursor to the unfortunate events of a year later.

Wisconsin was fresh off of an upset of previously undefeated Ohio State while we had turned things around nicely after being stunned in the season opener against Bowling Green. Wisconsin had suffered a similar type of loss for their only blemish to that point, losing at home to UNLV 23-5. Other than Ohio State, Wisconsin hadn’t played anyone of note in the conference yet. They had solid wins over West Virginia and Akron outside the conference.

We were on a similar track. After getting beaten by a pretty good Bowling Green team we went on the road and beat a ranked Wake Forest team in a game I almost included in this countdown as our best non-conference, non-Notre Dame win not in a bowl game. This was our first road game since that game, as we had defeated Arizona, Notre Dame, Illinois, and Penn State in four straight home contests. With Michigan coming up the next week, and our three toughest conference games all still to be played on the road, we needed to get this game to have a chance to win the Big Ten.

You could tell it was Purdue’s day from the very first play from scrimmage when Jim Sorgi tried to go deep on our secondary but was intercepted by Jacques Reeves. Two minutes later Jerod Void was in the end zone to cap a 7 play, 59 yard drive and give us an early 7-0 lead. On Wisconsin’s next drive we would once again be the beneficiary of a turnover. Wisconsin had reached the Purdue 27 before Sorgi fumbled and it was recovered by Bernard Pollard. Sorgi’s play in the first 10 minutes was much like his play in the Colts’ season finale last season.

Getting the ball at our own 30 we proceeded to march 70 yards in 9 plays before Kyle Orton found Taylor Stubblefield for a 6-yard touchdown pass. It was less than 10 minutes into the game, but we were already up by 14. That would prove to be critical, as despite playing well all game it would be the last time we found the end zone.

Wisconsin got on the board with a 28 yard touchdown run from Anthony Davis a little more than two minutes later. Purdue then had a nice drive going before Orton was sacked and fumbled the ball away. Jeff Mack scooped up the fumble and took it back 55 yards for a touchdown early in the second quarter, but Wisconsin missed the extra point. The teams then traded punts before Purdue put together a long drive for a Ben Jones field goal with about four minutes left in the half. We actually had a 14 play drive for the points, but it only took up five minutes. It did, however, assure a 17-13 lead at the half.

Purdue got the ball to start the half and went on an even longer drive. We managed to dink and dunk our way down the field for 71 yards in an astonishing 18 plays, but couldn’t put it in the end zone after getting a first and goal from the two. Jones hit a 20-yard field goal to make it 20-13 and make sure we got something out of it. They were also the only points of the third quarter.

Most of the second half was a defensive struggle, as Wisconsin couldn’t get anything going until a field goal drive of its own at the start of the fourth quarter. Mike Allen hit a 25-yarder with 9:42 left to make it 20-16 Purdue. Purdue then answered right back with another drive for three more points. All this was set up on a 50 yard catch and run by John Standeford, but again we couldn’t get it in the end zone. Jones’ kick from 26 was good, and we led 23-16 with 8:15 left.

Our defense then managed a stop, and we got the ball back after Wisconsin fumbled it away with 5:40 to play. We now had a chance to run the clock out. What ensued was nothing short of a disaster. First we had a 10 yard holding penalty, then gave up a sack on first down. Suddenly we were facing 2nd and 26. Naturally, we were forced to punt without making Wisconsin use a timeout. Things went from bad to worse, as Jim Leonard weaved his way through our punt coverage to tie the game with a 63 yard punt return. We looked deflated and appeared to be on our way to overtime in our second straight trip to Madison.

This is where Purdue avoided being Purdue, something we managed a few times during that period of Joe’s tenure. We got the ball at Wisconsin’s 17 yard line with 2:48 left and played aggressive. We worked our way to the Wisconsin 39 before Orton went deep to Ray Williams. Williams caught the ball and went out of bounds at the 3, much to the approval of an onlooking Lee Corso at the goal line. After Brandon Jones ran the ball down to the one Wisconsin started using timeouts. We then let them by having Orton take a pair of knees to help run out the clock. We called a timeout with 8 seconds left, knowing the Badgers were out of timeouts, and called on Ben Jones one more time.

To this day I wish we had centered the ball, as an 18 yard field goal from an angle is a very tough kick to make, but it didn’t matter. Ben Jones split the uprights with three seconds left and set off a wild celebration. Once Wisconin got the ball they had to 92 yards in one play. The Hail Mary was incomplete and we had escaped with a 26-23 win when people said we wouldn't.

I still maintain that the 2003 team had more overall talent and was a better overall team than the Rose Bowl squad. We would finish 9-4 that year with two of the losses in overtime to Ohio State and Georgia. The Big Ten title hopes took a severe hit when we got thrashed, as usual, at Michigan the following week 31-3, but all told we were 11 points away from being a 12-1 team that season. Up until the Ohio State game we were in the running for an at large bid to the BCS, and had Ben Jones made the field goal in overtime we may have gotten it. As it was, playing Georgia in the Capitol one Bowl on new Year’s Day was a nice reward.

What supplements my argument some is that the Big Ten was very good in 2003. We were fresh off of having Iowa and Ohio State nearly meet for the national title after not having played during the 2002 season. The Hawkeyes, Michigan, Minnesota, and Ohio State all won at least 10 games, and both Michigan and Ohio State went to BCS bowls. Wisconsin fell on hard times after this loss, finishing 7-6 and only winning one more game the rest of the year. All told the Big Ten put eight of its 11 teams into bowl games that year, as even Northwestern got in on the fun at 6-6. Only Illinois, Penn State, and Indiana spent the holidays at home.

We also had another rarity in that we defeated three ranked teams, still a record, in one season. Wake Forest, Wisconsin, and Iowa were all ranked when we played, and all four losses were to teams that finished the season in the polls. We played one of the toughest schedules in school history that year, and considering traditional powers Notre Dame and Penn State were way down that is saying something.

Lost in this game are Kyle Orton’s stats. In one of his better games, especially since we almost exclusively used him as a game manager that season and relied on the defense, Kyle threw for 411 on 38 of 55 passes with a touchdown and no picks. 30 of those passes went to either Standeford or Stubblefield, as deadly of a receiving duo as we’ve ever had, for 314 yards. We also had just one turnover to Wisconsin’s four. When you consider those numbers we probably shouldn’t have needed a last second field goal to win, but a victory is a victory.

This is one of my favorite games because it is one of the rare times we have delivered on the road in the national spotlight. It was one of the most hyped games in the country that week, and we looked very good in pulling off the win. We seemed to do everything right in this one. Each time we were challenged we responded, and each time Wisconsin made a mistake we made them pay for it. It was very nice to see us as one of the most feared teams in the country, even for only a week.