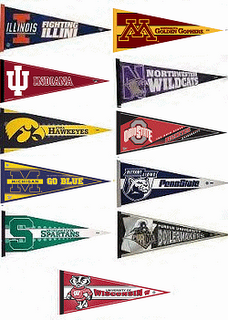 At the request of Black Shoe Diaries, the fearless leader of this merry band we call the Big Ten bloggers, we have a spring roundtable thanks the conclusion of spring football. We’ll get to Mike’s questions in a moment, but first I have to do some self-pimping.

Off the Tracks recently went national. Baseball America selected my question this week for its mailbag. I have mentioned here before how I feel Purdue baseball is one of the red-headed stepchildren of the athletic department, but the team currently sits comfortably in second place in the Big Ten with a 12-4 conference record after beating Ohio State in a series for the first time in 21 years. The Boilers probably won’t be going to the NCAA Tournament as an at large team with only a 21-17 overall record, but they are positioning themselves for a good seed in the Big Ten tourney. The tourney will most likely be played at Michigan, as the champion will host. Since Lambert Field doesn’t have lights I don’t think Purdue is even eligible to host unless they moved it Loeb Stadium. The Boilers do not have a series against the Wolverines, but if they can stay in the top 2 they will receive a first round bye and favorable schedule. That’s all you can ask for in post-season baseball. Considering we haven’t won a Big Ten baseball championship since 1909 I would say we are more than due.

The women’s softball team also continues what may be the best season in school history. The Boilers are 31-17 and stand at 6-6 in the Big Ten heading into a pair of games this weekend with #25 Iowa. That is good enough for a fourth place tie in the conference. Only six games remain in the season, two each against the "I" schools in the Big Ten. Five of those six are also at home, with four this weekend. Unlike baseball, the Big Ten is always a multiple bid conference when it comes to softball. A winning conference record and a decent showing in the Big Ten Tournament could mean a first ever NCAA berth for the program.

With that past, it is on to the questions.

This is where we cue the theme from MASH. Injuries were such an issue for the Boilers this spring that nearly half of the expected starters in the fall missed spring football. The worst injury that actually occurred in the spring was to offensive lineman Ryan Prater. Prater was expected to provide much needed depth at the tackle position, but hurt both his MCL and ACL and could be done for the season before it even starts. It also left us with only three healthy offensive tackles for the spring game.

The rest of the injuries are to players that should be back in the fall, but they are key guys that were unable to do much of anything this spring. Here is the list:

Many of these guys will be starters or key reserves in the fall, and it certainly doesn’t help that two of the main areas of depth needed are safety and offensive line. Quite simply, we will not be very good unless we can get most of these guys back and healthy. The two biggest players we need back are Erwin and Williams. They were playing very well at safety last season, but when they went down our defense took a major hit. If we can get them healthy I feel our defense could be surprisingly good. I would even say at this point, with the questions at receiver, it could be the strength of the team, and will be better than people think.

2. Break down the major position battles going on with your offense.

Well, aside from Tardy and Orton, the wide receiver position is wide open. Orton is our most experienced returning receiver, but the number two man as far as returning catches is running back Kory Sheets who had 30 catches last season. Expect Orton to start on the outside with Tardy in the slot, but Brandon Whittington, Joe Whitest, Aaron Valentin, Waynelle Gravesande, Keith Smith, Byron Williams, and DeAundre Muhammad will all be competing for the other spots.

The offensive line is also wide open, especially considering that we didn’t have a single healthy starter back in the spring. Jordan Grimes and Robbie Powell have moved on due to graduation, and pretty much every position is up for grabs. Monster offensive tackle Ken Plue is projected to play as a true freshman, and the dude is a house at 6’7", 365+. He will likely be the anchor of the line for years to come, but he is still a true freshman. He was able to enroll early and play in the spring, so that will help. Cory Benton is projected to be the new center, while Jared Zwilling is moving over from the defensive line for more depth. We won’t know the final line until the fall when everyone is healthy, but Plue probably had the best spring by default.

Finally, I wouldn’t really call it a battle, but Kory Sheets and Jaycen Taylor are fighting for the starting spot at running back. Both will play extensively, so it is not really a battle.

3. You knew this was coming. Break down the major position battles on defense.

The defense actually seems to be fairly set. We appear to have three linebackers that, while not all-world, should be pretty solid. Depth will be a concern in this area, so we cannot afford injuries to Kevin Green, Anthony Heygood, and Jason Werner. I was impressed with the play of Tyler Haston. Hopefully he can get some good minutes in the fall.

Our defensive line is very deep, as we will have a solid rotation of ends and tackles. There isn’t one "big name" like in past years, but the overall depth and talent as a unit should be quite good.

Once we get healthy, our secondary appears to be fairly set as well. What was youth two years ago now be one of the most experienced units on the entire team. David Pender will be the top corner, while King, Williams, Erwin, and McKinley are all pretty good safeties to build around. Since they couldn’t play we had a chance to develop plenty of depth in the spring.

4. Who are the unknown kids on your team that will be household names come December?

Keyon Brown had a breakout game at defensive end against Central Michigan in the Motor City Bowl. He could very easily be the next one in line as a great defensive end for us. We have had quite a line of succession from Roosevelt Colvin to Akin Ayodele to Shaun Phillips to Ray Edwards to Anthony Spencer to Cliff Avril. If Brown doesn’t step up, Ryan Kerrigan or one of our redshirt freshmen will.

Offensively I think Aaron Valentin could have a very good year for us. He had a very athletic one-handed catch in the spring game, and as a Juco guy he has a little more experience as a first year player. He could have a big year this year, with an even better 2009 in store.

5. How would you describe the general mood around your program? Are you gearing up the tailgate party for a conference title run or do you get the impression there are going to be a lot of empty seats in your stadium this year?

It is really hard to gauge at this point because of a number of factors. Personally, I think if we can get everyone healthy and avoid any more injuries during the season we have the ability to at least compete in every game except maybe Ohio State. Missing Illinois and Wisconsin means we have a favorable conference schedule. We get Penn State and Michigan at home, meaning if we’re ever going to beat them in the same season this will be the year. The only game where I feel we are completely overmatched is the game at Ohio State. Unfortunately, we may have the toughest overall non-conference slate in the conference. If you take away Northern Colorado we have two very difficult home games and a road game at Notre Dame that is always tough for us.

Another factor is that it is Tiller’s final season. We have a 5th year senior at quarterback who may be the best in the conference, so that will give us a shot in nearly every game. They guys certainly want to send Tiller out a winner, but how much will that be a factor? I know the rest of the Big Ten seems to be stepping back except Illinois, Ohio state, and Wisconsin. We therefore have an advantage by not playing two of those.

Minnesota will be better, but may still be a year away. If Indiana doesn’t get Kellen Lewis back they will struggle mightily. I know Michigan is Michigan, but I really don’t know how they are going to score points offensively with all they lost and the fact they are implementing a new scheme. Penn State needs to find a quarterback and just lost a great defensive player. I drank the Iowa Kool-aid the last two years and I won’t do it again. Michigan State is a mystery to me right now, and I think Northwestern will really surprise some people this year. To me, all these factors give me hope in the conference race.

I like that we have Danny Hope back to help our offensive line, particularly because he was so good earlier in his career as an assistant. If he can build our line and keep them solid we could have a surprising year.

Unfortunately, many fans don’t share my optimism. I am looking for a middle of the pack type of finish in the Big Ten. If we can get through the non-conference season undefeated, which is a possibility, we could have an even better year. I am setting my goal at 8-4 after last year’s 9-3 fell through. I will officially call losses to Notre Dame (after getting burned in 1998, 2000, and 2002 I refuse to predict victory in South Bend), Ohio State, a split of Penn State and Michigan, and a loss to either Michigan State or Iowa. I think we will also shock people from the beginning by upsetting Oregon at home in week two.