Share All sharing options for: Well, that certainly sucked 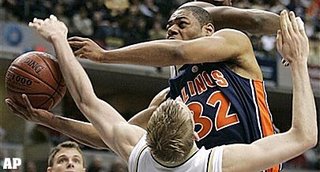 We have been a second half, finishing type of team all season, but last night that failed us. I knew Illinois was a dangerous team. I knew they were more than good enough to beat us. I knew Demetri McCamey was a dangerous player if he got hot. I knew that we needed to do the little things well like rebound missed free throws, hit or own, and not turn the ball over. We have done it all season, so I didn’t even mention it in the Illinois preview. In the end, those little things hurt us.

Demetri McCamey had an absolutely phenomenal game. Going 6 for 6 from long range and hitting every tough shot he needed to was clutch. The shot he hit to send the game to overtime is the type you simply tip your cap to a good player coming through when he needed to. He never should have had a chance at that shot though.

On the possession before, Purdue fans witnessed one of the worst calls you will ever witness in a tournament game. A travel called on Chris Kramer that was nowhere near a travel. I thought it was a foul. I had to listen to the radio broadcast on the way home from Rock Bottom on the north side of Indy before I found out it was a travel. It’s a call that was unnecessary, and absolutely turned the game. You figure if it is not called we can work the clock down to at least 10 seconds and get a shot attempt. If we draw a foul we surely make it a two possession game and can play the free throw game the rest of the way.

Even then, Illinois was feeling generous. With the amount of missed free throws and offensive rebounds given up in the overtime we had more than our fair share of chances to win this game. Illinois did everything in its power to give us the game in the extra five minutes, but we could not come up with a single possession that resulted in a field goal. It is disturbing to see us play like many expected us to play right at the end of the season when it matters most. Now, I don’t know if we can even hang on to a 5 seed in the NCAA Tournament.

Positives from the Illinois game:

E’Twaun Moore – The kid simply loves to play the Illini. Once again E’Twaun had a 20 point game inside Conseco Fieldhouse, and I like that we will be playing in Big Ten Tournaments here for the rest of his career. He hit a ton of huge shots tonight and connected on five 3-pointers. If he can start to play against the rest of the conference like he does against Illinois we will be fantastic.

Rest – One side benefit of losing early means we will have plenty of rest before taking on whoever we will play the NCAA’s. We’re going to be the favored seed in our first round game, and not too much of an underdog at worst in the second round. This means we still have a very good shot of at least making the sweet 16 and hanging around another week to stick in Digger Phelps’ craw. We should be at full strength by the time our first round game comes around, and coach Painter has to be plenty pissed off at going 3-3 down the stretch after an 11 game win streak.

3-point shooting – It was terrible in the overtime when we needed it, and that is because we may have went into 3-point desperation mode a little early. I have given up on us becoming a team that will get baskets inside the paint this year. We’re going to need to hit our 3’s if we’re going to have a deep run in the tournament. At least we hit some big ones, especially Keaton Grant.

Negatives from the Illinois game:

61.2% -- That number is Illinois’ field goal percentage in this game. It is nearly 20% above what we normally give up, and a sign that we played terrible defense. McCamey played an incredibly smart game by taking advantage of backdoor cuts for two critical baskets in overtime. Kramer was playing up on him to deny the ball, and that allowed McCamey to slip behind the defense for easy baskets. Pruitt also got a number of easy looks inside. We don’t shoot well enough to let even bad teams like Illinois shoot 61%. This makes me ill because if we hold them to our usual 40% we win easily. McCamey took over and flat out beat us.

Free Throw shooting – It’s not so much the number of misses, but when they came. Calasan had some key misses in the overtime. Moore missed a big one that would have tied it too. Illinois was its usual bad self hitting just 40%. That gave us a boat load of chances, especially in overtime, but we could not convert.

Bench play – This is another disturbing aspect from this game. Our bench has been very strong all season long, but only gave us 8 points. Crump actually played well and had a huge steal and basket in the second half. JuJuan Johnson and Scott Martin might as well have stayed in West Lafayette though with their contributions. These are two guys we need at least 10 points and 6 rebounds from and they gave us no points and 2 rebounds. It was probably Scott’s worst game of the season.

Turnovers – I like that we can rely on forcing 15-20 turnovers a game. It has become a key aspect of our overall game plan. We cannot, however, afford to give it back 16 times. The call at the end of regulation was a bad call, but we still had 15 other turnovers that more than made a difference.

Not getting the big stop – Perhaps credit should be given to Illinois here. Every time we needed to get one stop to seal the game in regulation Illinois would come through with a big shot to stay alive. In the overtime they made plays and we did not. They wanted this game more, and aside from their usual free throw problems they played like they were supposed to play all season long. This is the second time in three games that we have been unable to stop a hot shooting guard. If we can’t figure it out soon our tournament stay will be brief no matter who we play.

We’re going to the tournament. In the end, the only thing we missed out on from all this is a higher seed, possibly a 3. Now we will most likely be a 5, with an outside chance at a 4. I don’t like being in that 5/12 game because you’re either playing a major conference team that is trying to prove it is deserving of being in the tournament, a pretty good mid-major at large, or a good low major like a Davidson or something. It’s always a dangerous game to be in as the higher seed. Even being a 4 seed is no free ticket into round two.

I am convinced, however, that coach Painter will have this team ready to play. Historically the Big Ten tournament champ has not faired well in the NCAA’s, so perhaps it is a blessing in disguise. I am slightly upset that we don’t get another chance at Indiana, but if the basketball gods really want a second chance they will arrange it in the elite 8, final four, or championship game. We cannot control that at this point, and from the looks of things Indiana has plenty of their own problems after getting shocked by Minnesota. We only need to go and play one game at a time as it comes to us.

For the Big Ten, you have to be interested in the winner of today’s Illinois-Minnesota game sneaking into the field with the automatic bid. Just as it looked like Ohio State’s bubble may have popped someone else may step up and steal the auto-bid to give the conference five after all. Illinois has played Minnesota very well all season long, and I certainly will not be counting them out in the championship if they get there. It may even look better on us if Illinois goes on to take the auto-bid. At least then it won’t be as bad of a loss.

I don’t think you can truly call it a horrendous loss. Wofford was a horrendous loss. Missouri, since they did very little in the Big 12, was a bad loss. So was Iowa State. Losing a 3-point tournament game to a talented, but underachieving team we had already beaten twice isn’t that bad. I think we can learn a lot from it. Pending our draw tomorrow we will have plenty of time to rectify it. My goal for this team is still the sweet 16. That will set things up quite next year, and it is not unreasonable.

So we now sit and wait. Our fate has already been decided. We are in the tournament barring a shocking snub. Tomorrow night at 6pm we will find out what we need to do, and I think it will be refreshing to play a non-Big Ten team after 19 straight in the conference. That will be beneficial since whoever we play likely will not have seen us much this year. We know what we need to work on, so we have a week to work on it in practice. I am fully confident coach Painter will have us ready.