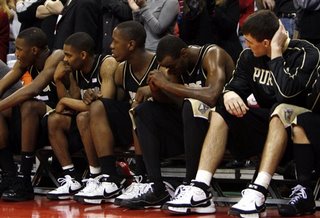 Yesterday I was riding pretty high, but after one loss this morning looks extra gray and dull. We have done the Little Things well all season long. Last night though, in the most critical game where we were pushed into needing those Little Things done, we were unable to do them. Little things include Scott Martin, who had a great night by all accounts with 14 points off the bench. In overtime he misses two wide open 12-footers that would have made a huge difference. The ball just didn’t bounce our way in that regard. Little things also include fouls. Our Secretary of Defense Chris Kramer barely allowed Jamar Butler to breathe in the first half, but battling foul trouble and tired legs in the second half prevented Kramer from playing his usual shutdown defense. It also forced him to play soft with 30 seconds left, allowing the final clinching basket to dribble in.

This morning I am torn. For most Purdue fans, if you had told us we would be 23-7 and 14-3 in the conference with a game left we would have taken it and ran with it before the season started. We have accomplished a ton with an NCAA bid already secure no matter what happens. A top 4 seed is still highly possible with a win over Michigan and a good showing in the Big Ten Tournament. Still, there is a certain empty feeling right now because we came so close only to have a championship taken away right at the end. Even losing an unexpected championship hurts, probably more so because your hopes get incredibly high as you approach it.

I am reminded of when my beloved Kokomo Wildkats won the sectional and the morning game of the regional a few years ago in 2005. Sure, we would have faced the Conley-Oden monster at Lawrence North in the state finals, but we were playing a Muncie Central team we had played to a four-point game in the regular season. Though we were only 14-10, we were one of just 8 teams left in the tournament and I felt we had as good of a chance as anyone of at least getting to state. I was pretty pumped up as we got ready to play Muncie Central.

We then promptly went out and got crushed 68-39, our worst loss since losing to Indianapolis Crispus Attucks in the 1959 state championship game. Muncie Central went on to their first of back-to-back runners-up finishes to that Lawrence North team. That is what this loss feels like right now, because even though we have accomplished so much and were right there we had it taken away.

And taken away it was. I will give all the credit in the world to Ohio State for coming out and playing their best game in weeks. Their backs were against the wall and they responded with a performance that shows they still care about this season. Jamar Butler played a phenomenal second half and the Buckeyes got contributions from Evan Turner and Othello Hunter that they had not gotten for some time. It even made up for Kosta Koufos’ lackluster night. They knew they needed a big win to salvage their season, so they went out and got it.

Rebounding – It’s hard to look at positives this morning, but I am very pleased with the fact we finally outrebounded a good team on the road. The 37-31 advantage on the glass is enough that should guarantee a win for us, especially considering we also had a 12-7 edge on the offensive glass. As mentioned above though, it was other Little Things that cost us here, where one offensive putback can make a difference. Special consideration goes to Robbie Hummel for 6 offensive boards and 10 overall.

Scott Martin – Just a great game off the bench for Scott, as he notched his highest point total since the Missouri State game. Those two misses in overtime were good looks that just didn’t fall. It’s almost like they were in that intermediate zone where it is tough to shoot because it’s not quite a full-fledged jump shot, but it’s not really a lay-up either. I certainly don’t fault him for taking the shots, but it sucks he couldn’t get them to fall.

Field Goal shooting – For us, we shot very well. Most of the time with our defense we will win games if we shoot better than 40%. The same is true when we shoot better than 40% from long range, which we did last night. We were even able to get something going in the paint as both Calasan and Johnson hit some shots close in. Still, we had another number of 5-10 footers we couldn’t knock down because we threw them off the glass too hard. Both Moore and Grant had clutch 3-pointers in overtime that we needed. Unfortunately Ohio State had an answer each time.

Negatives from the Ohio State game:

Team defense – We have prided ourselves on this all season long, but it was terrible last night. I will not pull any punches here, but we sucked in both the second half and in overtime. We allowed Jamar Butler to do whatever he wanted, when he wanted to do it. This was especially true in overtime, as he scored both on the drive and from long range. He’s had two great games in Big Ten play now and they were both against us. We know we can stop him too because he did nothing in the first half. As a team they shot nearly 50% and we gave up the most points we have given up in Big Ten play. Yes there was an extra five minutes to give up those points, but 16 of them came in overtime when we could not get a stop at all. Good defensive teams, no matter who they are playing, have to be able to get at least one stop in crunch time, and we were unable to do that last night. That is the most disappointing thing because one stop could have made the difference and allowed us to get the lead, putting the pressure on them. We’ve been able to do that all year but last night it failed us. I still can’t get over giving up 16 points in a five minute overtime. That is simply unacceptable.

Critical turnovers – While Martin’s misses were simply a case of the ball not bouncing our way, the turnover with about a minute to go and 6 seconds left on the shot clock was absolutely a backbreaker. First of all, E’Twaun made a freshman mistake by getting too far in and getting tied up. This cost us the possession arrow, then we wasted a pair of timeouts trying to get the ball in bounds. We had a man open in the corner for what would have been a good look at a three, but I don’t understand why Kramer didn’t pass it to him. Instead he made a risky long pass that was tipped and stolen. If we score there it is an entirely different ballgame. This is the type of mistake we haven’t made all year, but finally made at the worst time.

I really don’t have a ton of negatives from this game because we faced a team that wanted it more, but still did a lot of things we needed to do to win. My colleagues over at Boiled Sports said it best this morning: we didn’t have anyone rise up and take over the moment, but Ohio State did. Because of that they have temporarily saved their season, and for our sakes I hope they beat Michigan State this weekend to make the lose sting a little less. Ohio State played like they needed it more than us, and despite doing almost exactly what we needed to do aside from stopping Butler it was not enough.

Now, barring a miracle, the dreams of a regular season Big Ten championship are over. Essentially we need an out of this world performance by either Penn State tonight or Northwestern on Saturday. I am not encouraged by the fact that no one defends their home court better in the conference recently than Wisconsin, and no team does a worse job of defending its home court than Northwestern. We also appear headed toward the #3 seed in the Big Ten tournament since we do not have the tiebreaker over Indiana. Unless the Hoosiers lose to Minnesota tonight or at Penn State on Saturday we will be the three seed. If there is a Jesus type near State College that can heal Geary Claxton now is the time to step forward, please.
As for the rest of the rest of the season, the first thing we must do is win at Michigan on Sunday. Since it is the final Big Ten regular season game we will know if it has any meaning long before tipoff. If Indiana and Wisconsin win both of their remaining games out game against Michigan will mean absolutely nothing unless we lose. In that case it would affect our NCAA seeding. It is imperative that we win just to right the ship and avoid back-to-back losses. The game may mean nothing in the standings, but it will be huge for the collective consciousness of our team.

Next then is the Big Ten Tournament. We can still secure a top four seed, maybe even as high as a #3 seed in the NCAA’s if we win the thing. Unfortunately, playing from the three seed in Indy will be tough. Unless Northwestern pulls an upset we would face wither Ohio State or Minnesota in our first game. Depending on what happens the rest of this week, both will be looking for a win over us to secure an at large bid. Minnesota would need it more than Ohio State, but both would probably need it. A win would then likely set up a semi-final with Indiana. This would be a huge game because if we beat the Hoosiers it will look good in the eyes of the committee that we defeated every team in our conference. Barring a rash of upsets the final would then have us face Michigan State, Wisconsin, Minnesota, or Ohio State.

At that point both teams would be playing for seeding. Only if the 8/9 team from the top of the bracket gets here would there be a team playing just to get in. If both win their remaining games, I feel Minnesota and Ohio State will get in should they reach the Big Ten final. Winning the Big Ten tournament with wins over a good team (Ohio State or Minnesota), the only team we haven’t beaten in the conference yet (Indiana), and a quality team in the final (say a third win over regular season champ Wisconsin) would put us at 27-7 and give us a number of quality wins late in the season needed for a higher seed. If we avenge both of our late losses to Ohio State and Indiana it looks even better. This season is far from over, and we still have a lot to play for. The season can already be labeled a success, but naturally I want to go for more. I would love to at least make the Big Ten final, get a top 4 seed in the NCAA’s, and make the sweet 16. I think those are very reasonable goals to shoot for at this point, and will set us up for a monster year next year.