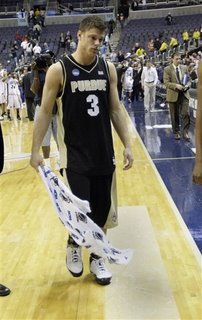 I apologize for the lateness in my game thoughts from the Xavier game. Late Sunday afternoon I was informed I would not be returning to my job with the NCAA on Monday morning. Since I am headed to Florida in little more than a week, I was forced to scramble to find some work until we left. That means it is back to substitute teaching until my temp agency can find me another position after I get back. It also doesn’t help that I had no indication whatsoever that my time was going to be ending until about 6pm Sunday evening. Since this was Easter Sunday, you can imagine what kind of mood I was in as I hustled to find replacement work.

A prior commitment for Saturday night meant that I could only watch about the first five minutes of the game. I set my VCR and headed to dinner and a concert with the game on the radio. I intended to save the actual game for once the concert was over, but I couldn’t help myself from looking at the score on my phone as the second half progressed. In short, Xavier is a very good team and their experience paid off in the end. They had an answer for every run, and were able to counter every move. When we started by scoring the first nine points they didn’t fold. We knew they wouldn’t after the resolve they showed against Georgia on Thursday. When we tied it on an E’Twaun Moore floater just before halftime, Drew Lavender, the Boilermaker killer, hit an absolutely huge 3-pointer just before the buzzer. Thank God we never have to see him again after the damage he has done. Though the last time he hurt us was much earlier in the season, it effectively started the end for us. Saturday’s triple did the exact same thing.

Even when we made a big run to take the lead with little more than five minutes left Xavier’s experience came into play. As a veteran team they knew what to do. While they weren’t bigger than us, they were stronger than us. While we were equal in talent, they held a larger edge in experience. They knew what they needed to do. They coerced a foul-prone team into fouling them, and they did what veteran teams do by getting to the free throw line and hitting their free throws. Bob Kravitz said it best Sunday morning, as he continued his startling change in allegiance from IU to Purdue. He stated that there was a huge lesson for these Boilers to learn in this game. If we learn it, we will win these types of games next year instead of lose them.

Positives from the Xavier game:

Tarrance Crump -- It is not often that I give this credit to a player, but Tarrance Crump played his balls off in this NCAA Tournament. Tarance only scored in double figures for 6 of 34 games this season, but two of those came in our two NCAA Tournament games. T-Crump is graduating in May with a great GPA and appears well on his way to a good life away from basketball. The kid left everything he had on the floor in this tournament with 22 points, 6 of 13 shooting from the field, 10 of 11 from the line, 3 dimes, and 3 of just 39 rebounds on the season. The pessimist would ask where this was all year, but the optimist’s view would thank him for throwing everything on the floor when it mattered most. That is the stance I am taking, at least.

Free throw shooting – We did our part when sent to the line. Keaton Grant was especially strong here. Once he comes back fully healthy next season he should be even better. I don’t think we will ever the extent as to how bad he was hurt this year, but it was pretty bad at the end. He did a good job of getting to the line Saturday night, as did Crump. They understood we needed to attack their defense. This did pay off for us.

Rebounding – Any game in which this crew wins the rebounding game is a good game. Much was made about how Xavier was stronger in the paint. Even in that, we won the battle of the boards. Unfortunately, this does not always translate into points on the board. Ultimately that is what cost us the game. Considering that Calasan and Johnson, our only two real post players, had three rebounds between them it is even more astonishing that we won the battle of the boards.

A hot start – For the second game in a row we got off to the best start possible. That is what you want to do in tournament play, and I certainly cannot fault us for doing that when it mattered most. Unfortunately, we ran into a team that was able to handle that hot start. Baylor did not have much tournament experience and folded under the pressure. Xavier was much more experience and they even looked unconcerned early on.

Negatives from the Xavier game:

Fouls – We gave up four plus one scenarios. In my book that is four too many. The guy was going to hit the shot anyway, so just give it up without the benefit of the foul. WE also put them on the line 33 times. That was one of the things we absolutely could not afford to do going into the game. If we’re going to take our team to the next level we must learn to defend without committing dumb fouls. This can eliminate 10-15 chances to score per game and greatly increase our own possessions.

Field goal shooting – We hit 39% from the field, they hit 54%. For two teams that were mirror images of each other before the game and extremely close in every statistical category during the game that is quite a glaring number. Xavier hit the shots they needed to when they needed to. Aside from a hot start and big run near the end we did not. It should also be noted we shot 21 3-pointers to their 12. We have come to rely on the 3-point shot too much this year when we can accomplish something near the basket. Speaking of which…

JuJuan Johnson and Nemanja Calsan – Take the ball to the rack, guys! Do you not realize I will kill to be your size and able to drive to the hole?We had six points from our interior players and they rarely asserted themselves in a game where they could have made a difference. This is where this team can go from very good to great. If these two can because the post players I knowt hey can be we will be unstoppable next year. They just need to gain confidence. I thought JuJuan had learned it some during the Baylor game but he stepped back here. If they can get bigger in the weight room other teams will have even more trouble with us.

Assists – This has been a strength all season long, but only nine dimes were dropped in the deciding game of the season. This tells me we abandoned the team concept we had when it mattered most. We had too many guys trying to take it themselves, and even then the shots weren’t falling. Maybe we did end up hitting a wall and I was unaware.

We finished 25-9 and won a game in the NCAA Tournament. On the one hand, this is good because many people thought we would struggle to make the tournament. We now have the longest active streak of first round wins, but that is something that could still be in play even if we had barely made the tournament. While we exceeded expectations, we have raised the bar for ourselves that anything less than a sweet 16 appearance and run towards a Big Ten title would be a disappointment. We will be ranked going into next season, and will be hunted by the rest of the country.

I am proud of this team though. There is a ton of excitement for the future, and we have several months to improve an already good product. We need to get bigger at every position. Our incoming freshmen, especially point guard Lewis Jackson, look to be solid compliments to this team. Calasan and Johnson will be bigger and savvier in the paint as well. Some have said we need to recruit a big man. JuJuan Johnson showed me in round one he can be that player. We will be back, and it is scary to think of us as an even better team.