And now, for something completely different…

Share All sharing options for: And now, for something completely different… 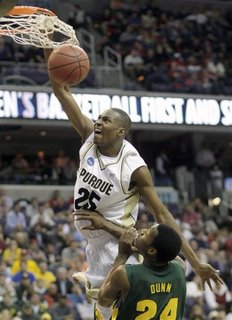 After today’s events, I must conclude I don’t know nearly as much about basketball as originally thought. While taking it easy during the most relaxing afternoon in the history of work I watched my Boilers explode for 90 points. We thoroughly dominated a team at its own game. I was concerned in the opening minutes when we appeared content to run with Baylor. Instead of dictating the tempo as we have done for most of the past two seasons we opened things up. We challenged Baylor to beat us with their style of play. Instead of forcing Baylor to grind out possessions we let them shoot and drive to the basket. Instead of being patient on the offensive end we attacked their defense. This resulted in JuJuan Johnson playing one of the best halves of his career and allowed us to go inside-out for the first time in awhile. We held a team to 40% from the field while hitting almost 50% of our own shots. That is an easy recipe for a win with the talent we have.

Baylor led 11-10 with about 15 minutes left in the first half. Scott Martin then hit a big 3-pointer To give us the lead for good. From that point on we slowly pushed the lead out to 10. Once it got there at 28-18 on another three by E’Twaun, we never let it get below 10. This three came around the 9 minute mark of the first half. Therefore, for the next 29 minutes of game play we kept a high-scoring team to at least a 10-point distance. If I were Xavier, I would be very, very concerned about this fact because they play a very similar style to Baylor.

Positives from the Baylor game:

Scoring Balance – We put five guys in double figures and three more had at least 8 points. You’re not going to find much better balance than that from any NCAA Tournament team. Conversely, Baylor, who thrived on balance throughout the season, had seven guys score, but it wasn’t nearly as evenly spread around. Jerrells had an all-around good game, but 23 of his 27 came it he second half while we already had a big lead. We seemed to find a different weapon down the floor every time. We even built a lead while Hummel, our most versatile player, didn’t score in the first half.

JuJuan Johnson – I have to give a special nod to JuJuan, who had and OUTSTANDING first half. You could almost see the light go on for him at the offensive end of the floor, and his dunk in traffic was really freakin’ sweat. If the light went on for him finally I hope he continues to play with the confidence he showed. We will be incredibly good if he can start to dominate the low post. With Lewis Jackson coming in as a talented point guard next year all the pieces are coming together. If JJ can get it going in this tournament though, the run could happen this year.

Tarrance Crump – As good as JJ was in the first half, I felt Crump played just as solid of a game in the second half. When you score 90 points it is the result of one of two things. Either your stars went off, or you got good balance and unexpected offense from players that don’t normally score a lot. In JJ and Tarrance’s case, it was the latter. Tarrance dropped three dimes in addition to his 11 points. He even took care of the ball, relatively speaking. He played like a senior not ready to hang it up yet.

Free Throw shooting – With such a large lead it didn’t become an issue, but I was very pleased at how well this group hit its free throws in its first ever tournament game. The officials didn’t call a particularly close game, but we still got to the line almost as many times as Baylor did. We also didn’t let fouls become an issue. That was a concern before the game, but not as the game progressed.

Rebounding – This was one of our best rebounding efforts of the season. Since we won’t face a dominant big man in round two it is doubly encouraging to out-rebound a team in round one. JuJuan was especially effective here, pulling down eight of our rebounds. E’Twaun also crashed the boards for eight boards. Each team had 15 offensive rebounds, but we did not let second chance points become an issue. Baylor was content to shoot all game long. We were ready to rebound.

A Fast Start – This is an area we have been lacking in all season long. In many games we have had to play catch up. This was one of our better first half efforts on the season, preventing that need to play from behind. Not only did we hit on all cylinders offensively, we played pretty good defense as well. Baylor wasn’t hitting at all. We kept them from getting in a grove from 3-point land. They shot worse than their season average both from long range and from the field as a whole. By the time they started to hit shots we were up 20 and kept it there for most of the second half.

Killing runs – It wasn’t so much our balance, but the fact that we were able to hit a big shot at every juncture when it looked like Baylor was going to fight back. In the second half we controlled the game through a combination of tempo and big shots. It’s almost like we were toying with them. We played slow when we wanted to play slow to stop a run. We played fast when we needed a quick basket. As a fan, those games are incredibly fun to watch.

Negatives from the Baylor game:

Sloppy play – I don’t know if it was tourney nerves or what, but we need to cut down on our turnovers because a team like Xavier will make us pay more. It seemed like we played especially sloppy in the second half. Baylor did its part by never mounting a serious charge though. 13 turnovers is a bit much for us, especially when we only caused 11. Nine of those 13 turnovers came from steals, many from bad passes in traffic. There were one or two passes that got stolen I must count as a positive though. They came because we had a guy in position for an easy basket underneath had we been able to complete the pass. It may have just been that Baylor’s quickness made a difference on those plays.

Not causing turnovers – I must have combed the box score for five minutes looking for another negative. The truth is that we played very well in this game. We didn’t cause our requisite turnovers, but we didn’t really need to when we controlled a tournament game for nearly 30 of 40 minutes. To beat Xavier and make a deep run we will need to cause more turnovers. That can come though, now that we have our feet wet in tournament play. I guess one final negative would be the announcers who kept trying to will Baylor back into the game, but can you blame them? Of course they wanted an exciting game.

Obviously we need to concentrate on beating Xavier, but since I am not playing I am allowed to look ahead. I am thrilled to death that Duke just barely survived against Belmont as I write this. Justin Hare came very close to hitting a shot that would have been replayed for decades It would have also completely flayed open our half of the West bracket. Duke is vulnerable, and I feel that if we were to play them in round 3 we would give them one hell of a game. This entry is delayed simply because Belmont made me move from the computer chair to the couch for the final minutes. One final thought on the round of 16, for what it is worth: Only tomorrow’s Birmingham games allow a staff to scout a sweet 16 opponent without leaving the building. That’s just something to think about.

That is in the distance though. Up next is Xavier, and they are naturally a very good team. We have played the Musketeers recently. I remember seeing David West and company destroy us my senior year in a game at Mackey Arena. I think we also lost a return game in Cincinnati the next season. I also remember Drew Lavender hitting a lay-up to beat us during the 2003-04 season at Oklahoma. That loss was the first in a series of frustrating losses carrying over from football during a rough time to be a Purdue fan. I want some personal revenge against just him because of that. They are one of just two top four seeds in this tournament that is not from a BCS conference, so they have certainly earned their place in the field.

Consider this: We are a better team than last year. I think many of our own fans would agree with that. I think you would also agree that Xavier is not as good as Florida was last year. We gave the Gators everything they wanted for 40 minutes. Many of their players even said it was the toughest game they played in their quest to repeat. The more I think about that game, the more I realize that we barely hung on with ruthless defense, an inside-out game with Landry, and by hitting big shot after big shot. I didn’t think we had any business being on the floor with the now two-time champs, but we gave them a game that made me the most proud I have ever been as a Purdue fan in a loss.

The gap between the two teams this Saturday is not nearly as wide. The way we played today makes me think that we are a very difficult matchup the first time you see us. Only twice in 10 tries did we lose a Big Ten game the first time a team saw us. Even then I still take the Michigan State game with a caveat, as I think it could have been different had Hummel played. We’re a tough team to play the first time around. Tell me who Xavier prepares for after the balance we showed today?

Tomorrow I will go more in depth with my preview of Xavier. We will have to play well in order to beat the Musketeers, but I do think we match up better with them than we did with Baylor. For now, I am going to bask in the glow of watching even more basketball games tonight. My team has already won, and I still have 20 games to watch in the next 24 hours. These four days are my favorite four days of the year. We have now won 10 straight first round NCAA Tournament games dating back to 1993. We’re not the greatest second round team out there, but we’re still alive. After tomorrow, only 32 teams can say that. The most important thing at this time of year is to still be alive.