That is what good teams do

Share All sharing options for: That is what good teams do 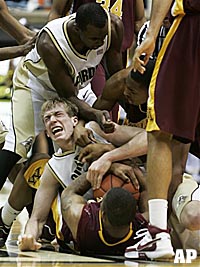 Because the Big Ten Network and the fact I physically cannot get it in my apartment (it is Brighthouse or Amish Cable in my building) is the bane of my existence I was once again reduced to watching the gametracker on ESPN.com or following the scores across the screen while I was working out. Fortunately I was not paying attention when Minnesota made a comeback to briefly take a three point lead, but from what I saw the rest of the time it appeared Purdue was in firm control of the proceedings throughout. Since working for the NCAA affords the benefit of having the Big Ten Network in the break room I was able to watch most of the first half at lunch today, confirming such suspicions. I continue to be amazed, as most people have, that this team does not play as young as they are. Last night easily could have been a difficult game, but instead the Boilers came out after a long layoff and looked like a team loaded with upperclassmen that simply outclassed their opponent.

At the start of both halves we established our dominance early with a run. In the second half we kept Minnesota comfortably at bay and never let them mount a serious charge from behind. This is the mark of being a good team. When you are a good team you make a win like this one, in a game that was very physical, look easy. This is one of the few times this season Purdue has been able to do this, and coming off of an eight day layoff it was even more impressive. I am now fully convinced that the Iowa State, Wofford, and maybe even the Missouri losses were complete flukes. If we were to play them again, at least Wofford, we would win going away.

E'Twaun Moore – I can get very used to E'Twaun having regular 20+ point games. He has now topped 20 three times in our last eight games with a low point of only 11 against Indiana and Wisconsin. He is learning that he can create his own shot and I am very pleased with his ability to knock down the pull-up jumper. In games where he shoots 50% or better we do so much better as a team, and his worst shooting performance (at Indiana) is our only loss in our last 13 games. The best part is that we are not really a team that has to go as good as someone like E'Twaun goes. We continue to have multiple options that force people to play him one-on-one. E'Twaun has also proven he can pass and dish out assists well when necessary, which only makes him even better.

Keaton Grant – The numbers weren't eye-popping, but Keaton had an especially efficient game last night. Since we aren't that great of a field goal shooting team yet efficient performances like Keaton's last night are critically important. It also helps that he hit the biggest shot of the night with a running 35-footer just before the half. Instead of going into the locker room tied we instead had a 3-point lead and Minnesota was demoralized by their poor defense in those final few seconds. Minnesota had just played a pretty good first half, but we had survived their big run. They then slacked off in those final seconds and Keaton made them pay dearly. We never trailed again, and it was a huge boost.

Field Goal shooting – It was better. I stated in yesterday's that if we took care of the basketball and shot 40% or better we would be able to win easily. We shot exactly 40%, turned the ball over 10 fewer times than our opponent, and walked away with a 12-point victory. We also shot better than 40% from 3-point land, which is critical for a team that has come to rely on the three as much as we have. I am most encouraged by the fact that our field goal numbers continue to improve.

Focus – To me this was the biggest positive from last night's game. There are some bad, bad teams in the Big Ten this year, but Minnesota is not one of them. They are very well coached and they have enough balance and talent to give anyone a good game. Other than their big first half run we never let them even have a chance at stealing this one away from us. I feel like we turned a major corner by taking a good team and putting them away like we did.

Negatives from the Minnesota game:

Rebounding – I continue to be confused as to how we allow the rare team without a size advantage against us out-rebound us by a large margin. Surely we are not that bad in the paint. Robbie Hummel came to rebound, but he is quickly a basketball freak of nature that is channeling Brian Cardinal and Larry Bird in terms of effort. How can our post players, Calasan and Johnson, continue to have less than five rebounds between them? Did John Allison come back with some remaining eligibility? Allison had to be the worst rebounder in a 6'11" body I have ever seen, but he usually pulled down at least 3 a game by accident. We have to improve our rebounding if we're going to go deep in March.

Nemanja Calasan (after the game's first five minutes) – I love this guy's intensity, but recently he has been great in the first five minutes only to disappear for the rest of the game. Calasan has had some big games for us this season, but lately he hasn't done much aside from a 3-pointer and maybe a basket or two inside to start the game. I was hoping to see more from him and Johnson last night, but if they want to save it for the postseason then breakout there it is fine with me. Regardless, he needs to rebound better. I think we need to have Sutor and Reid just hack on him in practice while he's trying to make a lay-up so he can finally hit some two foot shots with consistency.

Defense – Working on this over the break must have helped because we held another team to roughly 35% from the field. Wins become so much easier when you do this, and we never let them find a go to guy. We found ours in E'Twaun, but they were never able to get in a groove or find a guy that would consistently get a basket for them when they needed it. The closest guy was probably McKenzie, but his scoring was pretty spread out. Gopher Nation was especially impressed with Purdue's defense.

One down, three to go seems to be the general consensus of the Purdue fan base right now. With Michigan's shocking loss to Northwestern that road trip doesn't look nearly as scary now. Conversely, Northwestern coming to Mackey Arena this Saturday looks to be a little more difficult than expected, but it is a game that if Purdue plays to their ability they should handle the Wildcats quite easily. That leaves next week's roadie at Ohio State. The Buckeyes, who face the Gophers in what amounts to an NCAA elimination game Saturday at the Barn, will either be a demoralized bunch or a desperate opponent fighting for their postseason lives.

First we must take care of Northwestern on Senior Day. I have not said much about our one senior this year, but Tarrance Crump has done a very good job of accepting his role with all the freshmen and overcoming some of the challenges he faced early in his career. Coach Painter's first season in 2005-06 was a pretty forgetful one, but for Crump it had to be downright frustrating. Before that season Tarrance was involved in a nasty hit and run incident with a pedestrian while driving drunk. It was obviously not the smartest decision he ever made, but it gave him an opportunity to take stock before he ever set foot on the court of Mackey Arena as a player. Coach Painter naturally suspended him for the season under the guise of a forced redshirt, and Tarrance had to watch as the Boilers floundered on the court.

Tarrance doesn't put up big numbers, but the example he set by sticking with the program, taking his punishment, and earning his way back to the floor speaks volumes for his character. I am sure this has come off in a number of intangible ways that we do not see on the stat sheet. I'd like to thank Tarrance for his commitment and contributions to this team. He may kind of fall into the cracks historically as a bridge between last year's two seniors and this dominant class now, but he certainly will leave his mark because of his contributions. Personally, I will remember his game at Illinois where he stepped up and played well while everyone else was struggling in the first half.

I will be in attendance Saturday for my first game at Mackey Arena since last year's Indiana game. It is a testament to how far this program has come that we are selling out home games against the last place team in the conference again. It will be good to give this team one last taste of a loud home crowd, and hopefully many people will join me here in Indy in a few weeks when the Big Ten tournament gets underway. It is looking like we'll be wearing home whites for quite a while there, so why not bring the home crowd with us?