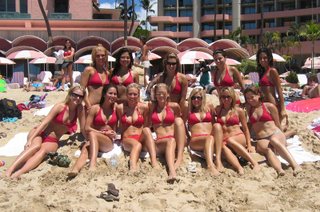 The Boilers face their toughest opponent of the Big Ten season with the dreaded Bye weekend, leaving me with a dearth of things to write about until Power Rankings come out on Monday. In an attempt to have some shallow analysis, let's break down bye week in the same style as every previous opponent.

What to fear from the bye week (Not what is seen on the left):

If this were the football team with its recent troubles I would fear them hanging out at Nick's, Harry's, the Neon Cactus, or any other West Lafayette watering hole. I am already slightly concerned after Crump and Green got into trouble out in Vegas and were forced to miss the Missouri State game. Fortunately we have two factors that allow us to avoid this: 1. West Lafayette is far from Vegas, and 2. The benefit of being a young team is they cannot legally get into these places yet. This, of course, did not stop Selwyn Lymon, but I would like to think this group of guys is smarter than that. Coach Painter is also a little harder on discipline than coach Tiller.

Bye weeks also lend themselves to the dreaded "dead hooker in the trunk" that has long been feared by the writer of this blog. Fortunately I have never seen a hooker in West Lafayette, but I may just not be looking in the right places.

Another thing to fear on a more serious level is that we cannot do anything of our own accord to maintain first place in the Big Ten short of a voodoo curse on Indiana or Wisconsin. It appears to be working in Indiana's case, however. We are completely at the mercy of Northwestern and Ohio State this weekend. Indiana will take care of themselves in the race if the following happens. Even Northwestern could get them without that many big names. Wisconsin is a different animal. They are facing an Ohio State team that is inching its way out of the NCAA field and could definitely use a big win at home over the Badgers to secure their place. Short of looking for mushroom clouds in the direction of Bloomington there isn't much we can do.

What not to fear from the bye week:

The bye week, when properly used, can be a great benefit to a team. I am actually glad we're utilizing it instead of playing a mid-conference game like Indiana and Northwestern have done. We've just come off of a particularly brutal stretch of games and can certainly use the time off to heal, work on shooting, and rebounding. It's not like we are suffering under the burden of a ton of injuries, but after 27 games guys are naturally banged up a little. This bye comes at the perfect time before we get into a stretch drive of games we will be favored in. We must stay focused on our goals of a Big Ten title and top four seed in the NCAA's. If we just win these next four games we will gather each. 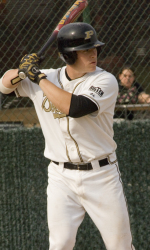 It is February 22nd and that means it is baseball season again! It certainly doesn't seem like it when I look outside and see 2 inches of snow on the ground, but today marks the first time there is a uniform start date for NCAA baseball teams. Because of my wife's influence I have become quite a collegiate baseball fan. We couldn't have two schools further apart in terms of baseball tradition though. Her Miami Hurricanes have won four national championships and are usually on the short list for a berth in Omaha each season. They have made the NCAA tournament a record 35 consecutive years and last year lost a regional for the first time in 11 years. Already the Canes carry a #10 ranking into the season, and we will be making our annual trip to Miami to see them April 2-9.

Purdue, meanwhile, has only been to one NCAA tournament (1987) and lost both games in that appearance. Their facilities are worse than many high school teams in Indiana (they don't even have lights!) and they are on a Chicago Cubs-level streak of suckiness by having not won a Big Ten championship since 1909. While the Mackey Arena project has already received $17 million in donations from just 9 private donors, the baseball program's Field of Dreams campaign has barely raised more than a $1 million of the $6-7 million it needs for a new field. By comparison, Alex Rodriguez, who never even attended the University of Miami, donated more than $3 million to the Mark Light Field renovation. We aren't even seeking a grandiose facility with locker rooms and concessions, just lights and a grandstand so we can host post-season games if necessary.

These two programs could not be farther apart. We cannot even raise enough money to get a field with lights so we could potentially host post-season events, while Miami is the definition of postseason baseball. The guys who play on the Purdue baseball team are among the most forgotten athletes at the school, but they still have played very well considering their circumstances of late. They have to begin each season with about a 25 game road trip. They can never get a quality opponent to come to West Lafayette. They can barely get anyone outside of the conference or smaller state schools to come play at Lambert Field. Still, they have had some bright spots. In 2001 they knocked off the #1 team in the country (Rice) to start the season, were ranked in the top 25 for a week, nearly won the Big Ten, and if not for a two and out performance in the Big Ten tournament probably would have made the NCAA tournament. Guys consistently get drafted and are doing well in the minors (Mitch Hilligoss), yet they do it in relative obscurity.

The reason for this long diatribe is that this new uniform start date is supposed to level the playing field. Before this season Miami used to open its campaign, at home, as early as late January while cold weather schools were forced to wait until mid- or late-February, go on the road for a month, then finally come home and still have several games moved around because of weather. This also meant warm-weather schools like Miami had to play only a handful of mid-week games, while northern schools would be playing four game, three day weekend series during the conference season plus several mid-week games to even schedules out.

There are both pros and cons to this. It helps a school like Purdue, and perhaps the entire Big Ten, become more competitive in what is rapidly growing into a revenue sport. It hurts warmer weather schools by taking away a major advantage they had by getting to play at home before many schools could even play period. It also pushes the end of the season back further, thereby hurting minor league baseball, specifically short season A-ball. This can hurt many of the summer leagues like the Cape Cod League that many players go to after the completion of their collegiate seasons. Still, this could be a benefit to Purdue in the long run.

The Boilers will open their season tonight 15th-ranked Baylor. The season looks to be promising with several returning starters from a team that played well at times last year, but faded down the stretch. I always keep an eye on the baseball Boilers mostly out of curiosity. While in school I attended a game now and then, but with so few home games there simply weren't many opportunities. These guys deserve just as much support as the football or baseball guys because they work just as hard or harder. We're never going to get the 7,000+ fans and great atmosphere that Miami does for its big series, but we can have another winning team at Purdue. The Boilers only play 14 games this year before opening their home schedule on March 22nd, and they even get a game against a team from the 2007 College World Series when they play at Louisville.

With the uniform start date Purdue can build a program if the support is there, so if you're a student head on out to Lambert Field on a spring afternoon the next time you see them playing. It has to be a good product if EA Sports made a video game about it! The field has never been more level for Boilermaker baseball, so hopefully 2008 can be a banner year for them. 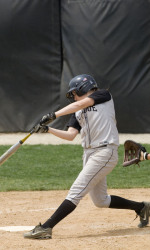 I have barely mentioned the Boilermaker ladies here at Off the Tracks, but it is time to give them some love. Lately the women's programs have been more competitive on a national level than the men's programs. The women's soccer team was a legitimate national title contender before getting upset by Indiana in the NCAA's. The women's golf team was a national runner up last year. The women's basketball program is down a bit due to injuries, but they have long carried the banner of best Purdue team nationally. Women's volleyball has performed very well of late as well.

One of my astute loyal readers, Hassan Merhi, sent me a great article about the up and coming Purdue women's softball team. They too recently played nationally ranked Baylor and beat them on the way to winning the Getterman Classic in Waco, Texas last weekend. The Boilers are already 6-2 on the season, and the Big Ten has proven it can compete nationally with Michigan winning the 2006 national championship and Northwestern regularly making the Women's CWS. I am certainly in favor of anything that puts my alma mater in a positive light and won't limit my support of sports teams to just football and men's basketball. Softball was still a very new sport at Purdue when I was in school and they have never even sniffed the NCAA tournament, but if things continue this way Purdue could have one more thing to be proud of athletically in 2008.