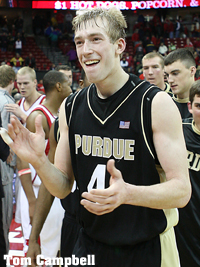 This game deserves its own separate entry. What the Boilers did last night was completely unexpected. Consider the following: in the previous 110 games at the Kohl Center, the visiting team had walked away a winner only six times. In Big Ten play the record was even better, as they were 51-2 at home under Bo Ryan before last night’s events. Here is the very short list of teams that have beaten a Bo Ryan coached team in Madison:

The 2002 Temple team ended up winning the third place game in the NIT that season. Wake Forest in 2003 and Illinois in both 2005 and 2006 went on to have successful NCAA seasons, while Marquette is certainly on its way to the dance as one of the top teams in the Big East this season. The 2005 Illinois team came very close winning an undefeated National Championship. Only the North Dakota State game can truly be considered a bad loss in that group of six.

Even more impressive is the number of very good teams that were unable to grab a win there. Last season’s Ohio State team, with three first round NBA draft picks and the #1 overall pick, lost 72-69. Pittsburgh carried a #2 ranking into the building last season and lost by 14. Michigan State went to the Final Four in 2005, but lost in Madison. Illinois also lost as a top 10 team there in 2002. This is a record that was not built on a bunch of games against Sisters of the Poor and Blind. This was a legitimate home court advantage where good teams went to die.

So what was different last night? What made Purdue not only have the muster to win and become just the second Big Ten team to win there in seven years, but dominate throughout? Once again, the answer is team-oriented basketball. Unlike against Michigan State, we were able to survive the loss of a key member that altered the rotation of that team. From the moment Robbie Hummel connected on a jumper at the 16:16 mark of the first half to make it 10-8 we never trailed or were tied again. This shows we how controlled the game even before the first TV timeout at the 16 minute mark.

In just six short weeks, this group of freshmen and sophomores has not only won 10 of 11 Big Ten games, they have changed the culture and attitude of the entire program. When this conference season began, we were simply hoping to win enough conference games to squeeze into the NCAA tournament. The Michigan game was lackluster at best. Something happened in the loss in East Lansing though that made this group believe they could win right now. Now we sit with seven games remaining, leading everyone else and in control of our own destiny. It is a destiny we can take even more control of in the next 10 days. At the very least it has been a hell of a ride.

Shooting the basketball – We finally shot over 50% from the field in a game. Because of the number of free throws that Wisconsin hit, and the number that we missed, to have any chance we needed to shoot well. Despite the size differential we were able to get good looks and we always had an answer whenever Wisconsin made a run. This hot shooting also allowed us to open up a 15 point lead in the second half. This lead kept the crowd out of it and gave us the confidence to close things out when we needed to. Shooting the ball well was also critical since we go beaten so badly on the glass.

Robbie Hummel – When one hot hand goes away we simply find another. E’Twaun had a good 11-5-4 night in just 24 minutes, but he was severely limited by fouls. Robbie stole the show and now has officially become a nightmare for Wisconsin fans. In two games against the Badgers he has scored 31 points on 10 of 16 shooting from the field. He closed the first game with a critical 3-pointer and good defensive play. Last night he beat them by helping us build a big lead. He also connected on three 3-pointers last night, two of them to start the second half when we built the lead.

Containing Brian Butch – Butch had his way with us in West Lafayette, but we survived. Saturday morning every pundit on ESPN was saying how we had no chance because of this. I would like to politely tell them to cram it tonight. Last night’s ESPN Midnight Madness gave Butch a C grade for his performance. Considering how badly we were owned in the paint and how he dominated last time, I would give him an F. How can a guy that played so well against us two weeks ago only take five shots? How can he have only five rebounds when we got out-rebounded by 20? Holding Butch to the game he had is what won us a game.

Team defense – Try to imagine how much we would have won this game by if it weren’t for the number of free throws Wisconsin shot. The Badgers hit just 17 of 52 shots from the field. In the closing minutes when we were hanging on they kept getting offensive board after offensive board, but couldn’t convert a 3-pointer when they needed to. Trevon Hughes was especially bad with only four points. We forced Wisconsin to beat us without their two best guys being on, and they weren’t able to do so.

Team depth – This is a bit of a hidden stat, but even with Martin hurt we were able to rotate eight guys and keep everyone fresh. This was critical when combined with the lead we built. Wisconsin only played eight guys, but two of them (Lauer and Stiemsma) played a combined eight minutes. Not only did they have to play catch up, they had to do so on tired legs. Is this why they were unable convert in the closing minutes? It’s possible they may have simply run out of gas.

Negatives from the Wisconsin game:

Stupid fouls – This has been a point of contention on the Purdue boards, but apparently the Wisconsin fans feel there should have been even more fouls called on us. We allowed Wisconsin 11 more trips to the line and they made 18 more free throws than we did. Krabbenhoft kept getting to the line, but fortunately he cooperated by missing two big shots at the end. Fouls cost us E’Twaun at the end, but I’ll give him credit for taking advantage of the time he was in the game.

Rebounding – How did we win while getting out-rebounded by 20? This simply does not happen very often in Big Ten play, especially on the road. If we can ever get past this weakness in our game we’re going to get even better as a team. We allowed the Badgers to have way too many second chances with 15 offensive rebounds. We only had 18 total rebounds! Thank goodness Wisconsin threw up enough bricks to build a new state orphanage.

Free throw shooting – Let me get this straight. We went on the road to face the number right team in the country. We sent the to the free throw line 33 times, got out-rebounded by 20, and barely shot 50% from the line ourselves? HOW DID WE WIN THIS GAME!! These three big negatives can easily be corrected, and if they had been we would have easily won by 20 or more.

I was in Lafayette for most of the day yesterday and it was amazing to see the number of Purdue shirts being worn in Tippecanoe Mall. The campus itself was just getting going before we headed back to Indy to settle in for the game. If I had known such a performance was in the making I would have stayed and watched the game, headed to Harry’s to celebrate, then gone with all the students to the airport to meet the team. I’ve only been out of school six years, but I am actually a little jealous that I never got to experience a team like this while I was on campus. The fact that they were met at the airport at 2 o’clock this morning is a testament to what they have done.

You may notice that I have changed things on the right side of the page. I have replaced the "Tiers to a Boilermaker NCAA bid" with a new feature. It is a "Tiers to a Boilermaker Big Ten Championship" feature now. An NCAA bid is secured at this point barring an epic collapse. We would need to lose every game from this point forward to miss the dance, and even then we may still go. That is not going to happen. We can set our eyes on playing for a higher seed and a title at this point, goals that weren’t that realistic as recent as six weeks ago.

The conference is also clearly separated into two tiers right now. Four teams are still in it for the championship, but there are five teams that clearly will be in the NCAA’s, and six that will not. Only Minnesota has a chance to move up from the bottom six, and really only Ohio State has a chance to fall back into the bottom. Both would take a lot of work in opposite directions.

For that championship we have to stay focused. We cannot afford to lose a game against the bottom six, so we now must beat Minnesota, Michigan, and Northwestern twice to avoid a bad loss. Of the remaining three games against Indiana, Michigan State, and Ohio State we have to win at least one to have a chance, and two to secure at least a share of the title. Should we beat both Michigan State and Indiana we will be the Big Ten champion.

We’ve come such a long way from losing to Wofford and Iowa State. If we had won both of those games who knows how high we would be. I think the win over Missouri State is what spurred this on. That was our biggest must win of the season and we came through. Since then we have won 12 of 13 and never looked back. If we played Wofford and Iowa State against we’d probably win easily.

I like the attitude of this team. Robbie Hummel stated that last night was a great win, but they had practice at 2pm today for Michigan State. That kind of attitude wins championships. The next step for that will be Tuesday night, and as long as this team stays focused we can take yet another step toward the most unexpected conference championship in school history.