Avoid the trap game (with a salute to the General)

Share All sharing options for: Avoid the trap game (with a salute to the General) 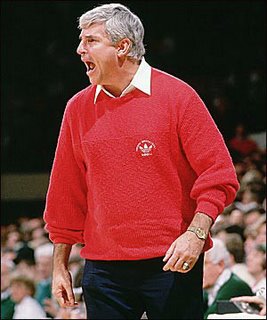 It's hard to say this as a Purdue fan, but I am going to miss Bobby Knight. I grew up in the 80's watching Gene Keady and Bobby Knight battle for Big Ten supremacy. Younger Purdue fans, sadly, will never get to experience this, but when those two gentlemen were on the sidelines at Purdue and Indiana, respectively, the games meant something to everyone in the country. When the schedule came out the national media always circled the two Indiana-Purdue games, and they were always on national TV. At one time Indiana-Purdue was as intense and highly touted as Duke-North Carolina, and even though it is on its way back to that point it is still a shell of its former self. It got to that point, however, because of Bobby Knight and Gene Keady.

Gene has been gone for a few years now, but Bobby was still doing his thing in West Texas until yesterday. Though as a diehard Boilermaker I am contractually obligated to not like Indiana, I have the utmost respect for Bobby Knight as a basketball coach. He was loud, he was rude, he was abusive, but he also ran a clean program, graduated players, and won games. Right now Indiana is easier to dislike because they only have one of those three elements. Living in Indiana I have heard all the stories and seen much of the videotape, but I have also heard countless stories of the man behind the sweater who, if you knew him, you could ask for anything and he would deliver.

I was fortunate enough to see the final Gene vs. Bobby game at Mackey as a student in 2000 and simply put, those two made the atmosphere that much more electric. I only got to see two games in person coached by them, but they were special games. Strictly from a basketball perspective, there are few that can match what Bobby Knight has accomplished as a coach. He had to be doing something right if he has won more games at the Division 1 level than anyone else plus three national championships. He has even done something no one else has done in 32 years: coach an undefeated national champion. I, for one, will miss him. Here is to you, coach Knight. Good hunting in retirement!

Because of our strange tendency to play some teams worse at home tonight could be a huge trap game for us. We have Wisconsin looming as a battle for first place in Madison on Saturday night, plus we have already crushed Penn State in their own gym. In theory this should be an easy one, but in theory Communism works as well. On Sunday the proletariat (Penn State) rose up to overthrow the bourgeois (Michigan State) and threw the theory of Penn State being a pushover without Geary Claxton out the window. In a way though, I think it helps us get our focus back on this game. I don't think our new ranking, for the first time in four years, will go to our heads. Penn State will have our full attention because of their upset Sunday.

Since we last saw Penn State:

Since we are in the portion of the schedule where it duplicates itself for four straight games it has been two weeks since we saw the Nittany Lions. In that time they have gone 1-2, but the one was a very big surprise against Michigan State. Before the upset of Sparty, Penn State had lost six straight, the last five of which by double figures. It is granted that in that five game stretch they played Wisconsin, Indiana, Purdue, Iowa, and Ohio State, but they weren't really even competitive in any of those games. That is what makes the Michigan State win so shocking. Not only did the Nittany Lions win by nine, they were in control for a good portion of the game and never let Michigan State build any kind of a lead. Scoring had clearly been an issue since the loss of Claxton, but they exploded for 85 points when they hadn't been over 65 since he went down.

A large reason for the upset of Michigan State was the emergence of Talor Battle as a scorer in place of Claxton. He is only averaging 9.5 points per game for the season, but since Claxton got hurt he had 20 against Indiana, 6 against us, 11 against Iowa, 15 against Ohio state, and 17 against Michigan State. He's only a freshman and my size, but he has started hitting the 3-pointer with more regularity and getting to the basket more. We were able to contain him in State College, so we must do the same tonight.

Senior Jamelle Cornley has done plenty of scoring as well with a pair of 15 point games since we last played Penn State, but his rebounding has not picked up. Junior guard Stanley Pringle also had his best game of the season with an unexpected 19 points against Michigan State. This was a career high for Pringle, and more than double his average. Pringle was 8 for 8 from the free throw line, as Penn State hit 16 of 20 down the stretch to seal the Michigan State win.

Defensively Penn State still ranks 9th in the Big Ten, giving up 66.2 points per game ahead of only Northwestern and Michigan. The Michigan State upset becomes more stunning when you consider the Nittany Lions got it done from the line. They rank ahead of only Illinois in free throw shooting percentage, hitting barely more than 60%. Despite their lack of size they are rebounding better than us, but we did own the paint in the first game.

The Michigan State game appears to be more of an exception than a rule. The Spartans have played like crap on the road so far and they haven't even gotten to the difficult portion of their road schedule. Penn State also seemed to have had a perfect storm of offense by hitting their free throws and connecting on nine 3-pointers. In the first meeting in State College Penn State put only Mike Walker in double figures with 10 and had a season low for points scored. Against Michigan State they had a conference season high in points and had four guys in double digures. If we play our game like we did in the first matchup we should be fine.

The keys are still to contain Cornley and Battle. Those two do most of the damage Penn State and if they struggle, Penn State will struggle. We also must continue to have balanced scoring and find the hot hand. What makes us so versatile and dangerous to teams like Penn State is that we can focus on two or three guys who are their go to players, while we have a different go to guy every night that can be one of eight or nine guys. As long as we continue to find that go to guy each night we will have success. The first time around it was Hummel, Calasan, and Moore. Tonight it could be Kramer, Green, and Crump, or any other combination.

We must get off to another fast start. That is the biggest reason for our success in State College and if we do so tonight we will have our ninth Big Ten win and assure that Saturday's game in Madison will decide first place. The longer we let Penn State hang around the more chances they will have of making this a trap for us. I honestly feel like we have too many weapons right now for them to stop everybody, and they would need a huge defensive effort. We must continue to shoot the ball well, as we shot nearly 50% against them the first time. Finally, we must continue our unselfish play, as a huge stat from the first game was the fact that we had 18 assists on 25 baskets. If we maintain those numbers it will be very difficult for us to lose. Purdue 68, Penn State 52