We now interrupt this basketball season…

Share All sharing options for: We now interrupt this basketball season… 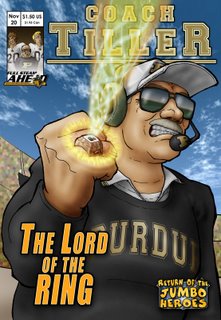 I was going to write a bit tonight on Purdue's Big Ten opening win over Michigan and publish my initial Power Rankings for the Big Ten Bloggers' Network, but the breaking news out of Lafayette on the football program has prompted me to change my schedule a bit. I was covering a high school basketball game in Lafayette at McCutcheon when I heard the news from one of the administrators. I didn't have a chance to read the report on GBI or in the Journal and Courier until I got home late last night, but the reports are interesting to say the least.

For the past few years I have been on the fence about Joe Tiller's performance. I have not one of the Chicken Little's on the Purdue board that fears the sky will fall once Joe leaves. I was a young fan during the Akers and Colletto eras. Tiller's first year in West Lafayette was my senior year in high school and I will admit, attending the now infamous Notre Dame game that season with my brother-in-law and his brother on my parents tickets was a motivating factor in choosing Purdue over Bradley, Dayton, and Butler. I admit for my major it wasn't the best choice, but at those other three schools I could never experience what I saw on that day. I was fortunate enough to be a student during the golden years of Joe's tenure, and even attended the Rose Bowl during my junior year at Purdue. Since graduating in 2002 I have purchased season tickets each season, and in fact it became a condition of my marriage that as long as we lived in Indiana we would get ticket because my wife was watching some college football if she couldn't watch her 'Canes.

Because of that I have experienced the highs and lows of the past 11 seasons, missing only four home games and more than making that up in road games. I appreciate what Joe has done for the university and I feel he has earned the right to leave on his own terms. In reality, what has he done wrong? Before Tiller came to Purdue we were nothing. We were a team that was content in winning our non-conference MAC game, maybe one more but not often (remember, we regularly played BCS conference teams like West Virginia, North Carolina State, California, and Washington). We would pull off one upset in the Big Ten, beat someone like Northwestern or Wisconsin when they were bad, then it was off to where our season mattered most: the Bucket game. Our season was judged by our success there.

At this time it was Indiana that regularly went to bowls, while we could only hope to upset them. The Hoosiers have only been to nine bowl games and six came during the Mallory era while Purdue languished at the bottom of the conference. It's not that Indiana was a marquee program at the time to measure ourselves against. We had a few good teams in that time, most notably a 1995 team with Mike Alstott that should have made a bowl game if not for Jim "a tie is as good as a win in the Big Ten" Colletto. The majority of those teams were dismal with a few NFL talents, but no one of note. My dad, whom I have to blame for this addiction, used to say, "As Purdue fans we get to see a lot of good football. Unfortunately, none of it is Purdue because we see Michigan, Notre Dame, Ohio State, Penn State…"

Tiller changed all that. In one year he came in and won eight games before a bowl win. He beat Notre Dame, a feat he has repeated four times in his 11 years when we had not beaten the Irish in the previous 13. He won in South Bend. He beat Ohio State. He beat Michigan. He beat Penn State. He's never won less than five games in a season, where the previous thirteen years we never won more than four. He took us to a level we hadn't attained in ages and has kept us there when many other schools have faltered.

We all know the statistics. We've been just about as even keel as they come as you can always pencil us in between 7 and 9 wins each year and a bowl game. Other schools like Miami, Oklahoma, Notre Dame, USC, and Nebraska have had higher highs in that time, but lower lows. Joe has built a solid base that, if things are handled well, can be built upon by the next guy to come along.

That being said, it has become more and more evident that Joe will not be the guy to take us to that next level. He took us to the Rose Bowl, but have we been a serious threat the past few seasons? Are we even a serious threat next year? If Joe comes back we're still only expected to have 8-9 wins at best and make another mid-tier bowl. No one has any confidence we can go into Columbus and win. Beating Michigan in West Lafayette appears to be a tall order. There are even doubts we can beat another overhyped Notre Dame team in South Bend. We've become spoiled, but it's a good kind of spoiled. It's better to complain about a bowl game than complain that our former coach is the reason we're 3-9.

So what do I think of the Paul Chryst? He's interesting to say the least. It's a very bold move, and I can understand the consternation among many fans that Morgan Burke may have forced Joe's hand a bit. We all knew that 2008 stood a strong chance of being Tiller's last year as he will easily pass Jack Mollenkopf as the winningest coach in school history. Should he finish his contract he could even reach 100 wins at Purdue, which would be one more addition to his legacy to go with the improvements to Ross-Ade and the team.

It is also understandable that Joe is pissed off at Morgan going behind his back. I understand that Morgan is the boss and he can do what he wants, but Joe has at least earned a little consideration. Some detractors may get on Joe for getting a ton of money out of his contracts, but he's also given back in terms of the aforementioned improvements. Joe apparently does have a little fire and wasn't as ready to leave as we thought.

Of course, the downside in giving Joe a say is that he likely would have been angling for Brock Spock, which would enrage even me right now. Not only that, Paul Chryst coming in would mess with the offense that we have in place. We already have co-offensive coordinators and they have done a decent job the last two years, so what would we do with three? Not only that, Chryst comes from Wisconsin, which could have a guy with two broken legs run for 1,000 yards in a season while we have had one 1,000 yard season since Mike Alstott left.

Another disturbing part of the story on GBI is the fact that regardless of what happens, multiple assistants would be leaving. Didn't we go through this two years ago when it seemed that everyone but Spack left or was fired? We're not yet the type of program that can simply suffer mass defections like that. Will they leave if Tiller stays in place? If everyone stays what will Chryst's role be?

My honest opinion on Chryst is that I am excited because he could bring us a running game that has been lacking. In 2005 we had a really good running game by necessity and the offense did fine. If we had had any kind of a defense that year it would have been a much better season. There are so many times where losses could have been wins if we had just had a running game that could kill the clock with a lead, and I feel Chryst can bring that type of offense to West Lafayette. At the very least this is a surprising, bold move that shocked me because I felt nothing would happen this offseason, then Tiller would retire at the end of next season and someone else would take over. It's a step in the right direction in that we looked outside of the Purdue family.

Truthfully though it's too early to draw any final conclusions at this point, as according to GBI there are at least two other coaches out there that Morgan has talked to. As I mentioned earlier I feel that whoever comes in next can take us to the next level and have us compete regularly for conference championships. We've moved beyond the point where winning the bucket is everything, and we won't fall back to that. There is certainly more of a base to build upon than there was when Tiller came in. Until we know anything else though, we must wait.