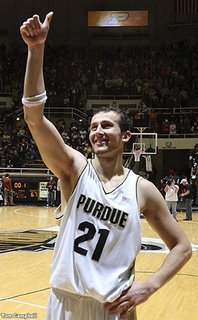 Sorry for the lull in posts since the Illinois game, but the extended weekend lent itself to a trip to Chicago and little time to write. Once again in the Illinois game we saw a slow start at home lead to a dynamic finish. We held serve against another tier three team at home and if we can continue to do so in the remaining home games against Northwestern, Penn State, and Iowa we should be in very good shape for the tournament. Since we’re a few days removed from the game and only a day away from the next one at Penn State I will skip over the belated analysis and defer to my colleague Boilerdowd over at Boiled Sports for his analysis of the game. In short: Keaton Grant was awesome again and Calasan showed up inside. We’re a very good team when those two things happen.

For the remainder of this update I wanted to get into my ballot for this week’s power rankings and go over what our non-conference opponents are doing to help build our strength of schedule. Right now that is the weakest part of our profile when it comes to the tournament, but we can continue to help ourselves by simply winning the games we should in Big Ten play. As bad as much of the conference has looked to this point I still maintain that if we do that we will be fine. There is no way they will keep out an 11 or 12 game winner in conference play because it has never happened before.

Bethune-Cookman (7-11, 2-3 MEAC) – The Wildcats play in one of the weakest conferences in the country and their only hope of dancing is to win the conference tournament. Even then the MEAC winner is almost always in the play-in game regardless of record, as they are a bunch of schools that get beaten up out of conference before playing each other for their one bid. Hampton is the best team in this conference and they have already beaten Bethune-Cookman once. We’re getting virtually no help from the Wildcats, as they have no signature wins and have lost to teams like Wofford (as we have), Savannah State, and someone called Warner Southern.

Lipscomb (8-11, 2-3 Atlantic Sun) – The Bison nearly took us down in Mackey Arena during the second game of the season, so it’s a very good thing we avoided this bad loss. I had high hopes they would compete for the Atlantic Sun crown but that has not been the case. This is another one-bid league with Jacksonville leading the conference at the moment. Lipscomb has yet to play the Dolphins. Their next game is against Mercer, who earlier this season went on the road to beat the USC O.J. Mayos. Lipscomb does not have a single decent win at this time.

Loyola, IL (6-12, 2-6 Horizon) – The Ramblers are at the bottom of the Horizon League and will probably stay there all season. Obviously Butler is in the tournament unless they completely fall apart, but Cleveland State is beginning to make a case for an at large bid and both Valparaiso and Wright State are capable of running through the conference tournament to grab the auto bid. Loyola will give us no help unless they beat Butler at Hinkle on Thursday.

Clemson (14-4, 2-2 ACC) – I wish we were playing them now because I am confident we could close the win. Even then I feel we would have won if Kramer had not gotten hurt. Instead we missed an opportunity for a good road win and we very well could be compared to this team right on the bubble on selection Sunday. The better they finish in the ACC the better it is for us because it keeps them off the bubble.

Indiana State (9-8, 4-3 MVC) – We’re getting some surprise help from the Sycamores as they have been very competitive so far in the Valley. They aren’t a threat to get an at large bid, but if they ever learn how to play away from the Hullman Center (currently 8-0 at home, 1-8 on the road) we’ll get even more help. The best win so far is over Southern Illinois, but the Salukis have fallen hard this season.

Ball State (3-13, 2-2 MAC) – I thought the Cardinals were going to be the worst team we played all year because of the fallout surrounding their program, but they have played decently in the MAC of late. We’re certainly not going to get any help from them, but three wins is about three more than I expected. They also beat Central Michigan who won at Michigan so they have a semi-respectable win.

Missouri (11-7, 1-2 Big 12) – This is another team that could end up sitting on the bubble with us on Selection Sunday, more so than Clemson at this point. They are probably behind Iowa State right now based on record and the fact the Cyclones beat them head-to-head. Right now Missouri also has a better win than us having beaten Texas. They are a difficult case because if we want them to do worse, that bogs us down since we lost to them. If they do better we will be in competition with them for a spot.

Louisville (13-5, 3-2 Big East) – Clearly this is our best out of conference win, but right now the Cards are probably on par with Ohio State. All five losses aren’t horrible, but they will need to compete for the Big East title if we’re going to get a boost for beating them. They have games left against five ranked teams and each win they get boosts our schedule even more.

Texas Southern (4-14, 3-2 SWAC) – Much like Bethune Cookman, the Tigers play in a conference that is destined for the play-in game almost every year for its one entrant. Things were looking good for us as they started 3-0 in the conference, but on Saturday Texas Southern gave Grambling its only win of the season and then lost to Jackson State last night. We will get nothing from them except a very small boost if they win the SWAC.

Wofford (9-8, 2-5 SoCon) – Wofford, I had such high hopes for you. The Terriers had a very good non-conference season beating us and nearly beating Alabama in Tuscaloosa. Since getting into Southern Conference play, however, the Terriers have been beaten up. The SoCon is a pretty good little league, but Davidson is obviously the class of the conference. They have a small chance at an at large bid if they run the table and lose in the conference tournament final to someone, but other than that it is a one bid league. Right now Wofford doesn’t have high hopes for that bid.

Iowa State (12-6, 2-1 Big 12) – This loss may hurt more than the Wofford one simply because of bubble positioning. Right now if you put us, Iowa State, and Missouri on the board for the last spot we would be behind both of them because of this game. The Cyclones are playing better and better of late, and the only bad loss came against Bradley. As they continue to do well in the Big 12 we will be more and more hurt by their loss until they get to lock status.

Missouri State (10-9, 3-4 MVC) – The Bears are probably helping us a little more than the Sycamores right now based on the fact they killed Indiana State in Springfield. A top division finish in the Valley and good showing in the tournament would help us even more. There are no terrifying losses to this point, but no standout wins either. They are a team that could get hot and steal the Valley’s auto-bid if they get a good draw, so that would help as well.

Florida International (5-12, 2-5 Sun Belt) – The Golden Panthers play in a league with a couple of good teams, but most everyone else is on the fringe of Division 1. Right now those two good teams are South Alabama and Western Kentucky. Both are working hard to put together at large profiles as a fallback to the conference tournament, and as a result they are using teams like Florida International as fodder. FIU will give us no help unless they turn things around immediately and become a player in the conference tournament.

I was going to do another theme this week, but I will save it for next week since I didn’t have time to do the research I wanted to do on it. In the meantime here are my rankings for this week with a brief commentary on each team:

1. (1) Indiana (16-1, 5-0) – I can’t argue against the Hoosiers for number one as long as they keep winning. Even though they are doing it ugly they are still doing it. They have a very interesting mid-conference game against Connecticut this week.

2. (2) Wisconsin (15-2, 5-0) – If Purdue can get past Penn State this Wednesday Saturday will mark a huge opportunity for a win with the Badgers coming to town. Wisconsin has yet to be challenged in conference play, but maybe we can catch them looking ahead to the Indiana game after us.

3. (3) Michigan State (16-2, 4-1) – The Spartans have looked a little off in conference play so far, but they still have won four games. Minnesota is certainly frustrated by them after two close losses. In theory they have four easy games until they come to Mackey Arena, but as much as they are struggling don’t be surprised if they drop one.

4. (6) Purdue (13-5, 4-1) – We’re another team that is getting it done against the bottom of the league. A win tomorrow night at Penn State would put the Boilers in a good position to challenge for the conference title if they upset Wisconsin on Saturday. That is a large if though.

5. (5) Minnesota (12-5, 2-3) – I like the way the Gophers are playing, but they just lost two golden opportunities, no pun intended, to state their case for the committee. Much like us they can greatly improve their profile against the bottom of the league, and the game on February 27th in Mackey will be huge.

6. (4) Ohio State (12-6, 3-2) – Ohio State has not helped their case very much with this three game losing streak. The next four should be wins, but if they get tripped up they could teeter off of NCAA lock status.

7. (8) Iowa (9-10, 2-4) – I love how the Hawkeyes are giving every team they play absolute fits right now. They may not be the most talented team in the league but they are going to make you earn your win over them.

8. (7) Penn State (10-7, 2-3) – It’s really a shame the Nittany Lions lost Geary Claxton, because I felt they could have competed with Minnesota and Purdue for an NCAA bid with him. I still think they are a dangerous team at home, like almost anyone else.

9. (9) Illinois (9-10, 1-5) – I hope I didn’t read Boilerdowd right and that Illinois is considering firing Bruce Weber. That would be a mistake and certainly someone else would grab him quickly. The Illini are struggling this season, but they have more than enough talent to be more than an irritant to everyone else. Visiting Champaign will be difficult for the Boilers.

11. (11) Northwestern (6-9, 0-5) – Northwestern does not have the benefit of playing themselves, otherwise I would expect a win from them. I am honestly not seeing them grabbing said win unless someone completely botches them. Kevin Coble is a great player though.