Share All sharing options for: Off the Tracks Big Ten basketball rankings 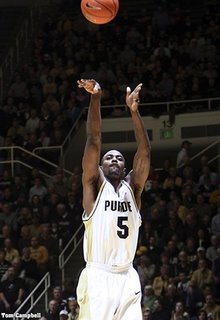 One down, 10 to go. Saturday's win over Michigan was nothing more than a step. Yes the Wolverines are generally considered to be among the worst teams in the conference this year, but the selection committee will not look at this January 5th win and judge it on its closeness. They will simply see that it was a conference win, at home, and that Purdue did not blow a game to a team it should have beaten. As outlined previously, our Big Ten schedule is, in reality, an 11 step process to an NCAA bid and this was merely the first step in the process. If you'll notice off to the side I have started a tier system of wins needed to make the NCAA's based on my previous formula. Beating Michigan is what I consider a tier 1 win; where we needed minimum of five wins in six games (I've moved Penn State up a tier from my original projections). This was a game we couldn't afford to blow and in the end, we didn't.

POSITIVES FROM THE MICHIGAN GAME:

Keaton Grant – Solid 3-point shooting was a large question mark coming into the season. Keaton seems to be a very pleasant surprising answer to that question.
Before the season I felt he would be a solid role player that could score when he got lost among all the attention paid to the freshmen and Kramer. The Louisville game was a big one for him in getting his 3-point shot going. If he can regularly lead the charge from long range we're going to get better in a hurry.

Free Throws – I am a firm advocate of free throws winning ballgames and that's exactly what happened on Saturday. We could have put Louisville away much sooner with a better free throw performance, and these woes cost us in games against Missouri and Clemson earlier. Any time you hit 90% in the final minutes from the line you are most likely going to win.

Handling the trap – As was mentioned by my colleagues over at Boiled Sports, we struggled against the 1-3-1 zone of Clemson and Missouri, but were able to handle it quite efficiently against Michigan. The fact that Michigan isn't nearly as good as those two teams could have something to do with it, but I'll take what I can get.

NEGATIVES FROM THE MICHIGAN GAME:

Rebounding – It was only 42-40, but we got out-rebounded by a team that doesn't have a true post presence. At least we were able to block seven shots, but we've got to rebound better to have a chance at beating better teams. Rebounding is all about effort and positioning. With players like Calasan and Johnson in the post I expect better numbers, but so far they haven't been consistent. Calasan should never have a two rebound game with his physical presence and energy.

Chris Kramer – I think it's time for Chris to start shooting the ball more. I've been slightly disappointed in his play to this point because I expected more from the perimeter after his performance in the two NCAA games last season. If his shot is supposedly better than it was last year then it is time to unleash it as a weapon, especially since E'Twaun continues to struggle with his. Kramer has the ability and toughness to be able to create his own shot, so we need at least 10 attempts a game from him. Six is just not going to cut it.

Playing to the level of competition – Right now Purdue reminds me a lot of my high school team when I was there. Each year we were ranked in the top 10 in the state, but we had a maddening tendency to play to our level of competition. If we were playing a fellow top 10 team we could play them within five points. Unfortunately we could also play a team below .500 to a five point game as well. It's frustrating because on more than one occasion then, as with this Purdue team, we would let teams hang around they would eventually beat us. My sophomore year was an example as we were 24-2, #1 in the state for most of the season, and ranked as high as #12 in the country by USA Today. Our two losses came in the final regular season game in overtime and in the semi-state both to inferior teams we had no business losing to. In each game we let them hang around until they finally decided, "okay, we're here, we might as well try to win this thing." We'll see if this trend continues this week at Michigan State.

In keeping an eye on some of the teams we played in the non-conference season it is nice to see that Indiana State is off to a surprising 3-0 start in the Valley. With Southern Illinois in the tank they have lost a chance at a quality win or two, but if they can have a good Valley season and come out in the top four along with Missouri State it will be a win that can gain some value as the season progresses. Should they win the conference and get into the NCAA's as a conference tourney champ or at large bid as regular season champ that will be even better. So far the Trees are undefeated at home, have beaten Northern Iowa and Creighton in conference play, and have a chance to get a big road win against conference leader Drake this week.

Thanks to the Big Ten Bloggers' network we have no expanded from football to basketball. The indefagitible Tom Coyer of Gopher Nation has volunteered to lead us into this new era by compiling each bloggers' weekly rankings and posting the final poll by Tuesday afternoon. With the first week of Big Ten play in the books here are my rankings:


More From Hammer and Rails