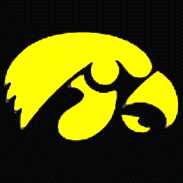 Tomorrow night is the next step. I like to think that great teams are the ones that win games after they have notched a big victory. Would last season's Colts team been as good if they had blown all the momentum from the New England win and lost the Super Bowl to the Grossman-led Bears? What about all the teams that pull first-round upsets in the NCAA tournament only to fizzle in the next round? That is where we stand going into tomorrow night's game with Iowa. Right now the program has a ton of momentum, but we cannot afford to drop a home game to a team we have already beaten on the road. This is our first of four straight games against teams we have already beaten. It is especially difficult to beat a team twice, but it is a little easier when that first victory comes on the other team's home floor.

I would not be surprised if there is a bit of a letdown tomorrow night. Iowa is a team that may not be the most talented in the world, but coach Lickliter has them playing hard every game. Anytime you do that you give your team a chance to win. I am calling this round three because we have already secured Black and Gold conference bragging rites by winning the football game and first basketball game. Tomorrow night we can go for the sweep and put a dangerous team like Iowa behind us for the year, at least until the Big Ten Tournament.

Since we last saw Iowa:

The Hawkeyes have only played three games since we last met, but they were able to win two of those three including a road game at Michigan. The lone loss came at Indiana by 22 points, which was a step back after Iowa challenged the Hoosiers to start the Big Ten season. It's also a good sign if it is an indicator of how Iowa will play a team the second time around. Most recently Iowa took out Penn State by 15 in Iowa City on Saturday in Iowa City. While Iowa will probably need to win the Big Ten Tournament to get to the NCAA's, the NIT is still a possibility. Currently Iowa is 10-11 overall, and with two games against Northwestern, a home dates against Michigan and Illinois, and a return trip to Penn State the Hawkeyes could be looking at a .500 season in conference play with just one more upset.

Leading scorer Tony Freeman had his best game of the season against Michigan with a 28 point effort, but he only had five against Penn State. Number two man Josh Johnson's production has also fallen off, but he did get back into double figures against the Nittany Lions. Cyrus Tate had a very good game with 21 points against Michigan, and Jake Kelly has become more of a threat to score. Since Kelly is from Carmel this will be a homecoming game of sorts.

Defense is still the MO for Iowa, as they rank number 2 in defensive average at 58 points per game only behind Wisconsin, but they still rate comfortably last in scoring at 57.4 points per game. Currently they are scoring an average of seven points fewer per game than last place Northwestern, who is ranked 10th in scoring conference-wise. It will once again be critical to score early and often, as this is a team that can be beaten with just 60 points. It's not like that is an automatic benchmark for us (we have been over 60 in four of our five losses), but Iowa has given up 60 or more in 8 of their 11 losses.

Since our win over Iowa was just two weeks ago many of the keys remain the same. It is important for us not to suffer a letdown after the Wisconsin win, because Iowa is just dangerous enough to knock us off. Losing a home game to them would be a serious blow, especially considering we already own a road victory. As far as I am concerned they can win as many road games as they want after Wednesday.

Tomorrow night we must find the hot scorer, as it was Keaton Grant the first time around. Moore could be a candidate with his performance against Wisconsin, as could Hummel with the way he finished the Wisconsin game. Kramer took a few more shots against the Badgers as well, and I think he is due for a big game. We have to contain both Freeman and Johnson as they are the only two consistent offensive weapons for the Hawks. I would keep an eye on Tate as well.

Some of the things I cited as areas to work on from the first Iowa game were scoring lulls, our inside play, and overall field goal shooting. Right now the field goal shooting is my biggest concern, as we aren't shooting particularly well from the field, but we're somehow getting it done night in and night out. We were under 40% at Iowa and under 40% against Wisconsin. We can't afford to have this trend for long before we get burnt. The inside play was much better against a bigger, more experienced Wisconsin team and I expect Calasan and Johnson to step up and have another learning game tomorrow night.

Honestly I have a hard time seeing us losing this game if we shoot better than 45% from the field and score more than 60 points. Once again, we just need to outscore a team like this. We gave up 62 in Iowa City, but this time the Hawkeyes won't have the benefit of the home crowd. It should be interesting to see how our home crowd responds to the first mid-week conference game of the season. Through an incredible fluke in scheduling we have had four Saturday home games in the first seven conference games and each road game has been on a weeknight. That trend reverses this week, as we don't have another Saturday home game until Northwestern at the end of the year. Since the last three home games have been "event" games it will be interesting to see how the crowd treats this "regular" game. I think we will be just fine as long as we continue to take each game as it comes and don't suffer any mental lapses. Purdue 66, Iowa 56

A final note on Iowa:

I wasn't going to say anything, but yesterday this blog was called out by the Iowa blog on the Big Ten bloggers' network, Black Heart Gold Pants. I've had nothing but respect for Adam and the crew over there, as they produce one of the funniest (if not angrily-charged) blogs on the network. I have even taken the time to nominate them for the CFB Blogger awards under the Trev Alberts Quits To Do Construction Award. I had never even heard of Hey Jenny Slater until yesterday, but I admit there are similarities between yesterday's power rankings and a post on Jenny Slater made more than two years ago. A few things:


So that takes care of that and I am considering the matter closed. Maybe it is just a little bitterness that we transferred the BGCNOSM* to them this football season. If they want to pursue anything further I will simply let my team do the talking on the court tomorrow night.

* -- Black and Gold Curse of No Ohio State or Michigan on the football schedule. When a team wears black and gold and has this happen they do not have a good season, as evidenced by 2005 and 2006 Purdue Boilermaker football.

** -- As evidenced here, Black Heart Gold Pants was indeed joking. Special thanks to Boiled Sports for pointing this out to me. I guess I'll hop on board the retard train for overreacting to this.