What's coming from Off the Tracks...

Share All sharing options for: What's coming from Off the Tracks... 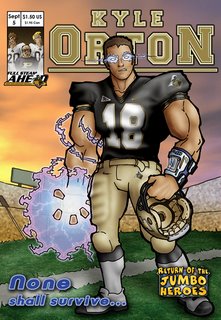 First things first, there is some good news for Purdue football after nearly a month of bad news. The Chicago Bears website is reporting that Kyle Orton will be getting the start against Minnesota next Monday night. I don't really see what people were so upset about two years ago when he was the regular starter. He was a 3rd round rookie quarterback that was not expecting to play, yet came in and won 10 games on the way to the Bears making the playoffs. He didn't exactly light up the scoreboard, but the point is that he won games, and that is all that matters in the NFL. It normally takes at least three seasons for a quarterback to be worth anything statistically, as even Ben Roethlisberger wasn't a statistical monster his rookie year. The Bears, like many other teams *cough* San Diego *cough* simply lost patience with a guy because he wasn't phenomenal right out of the box. Here is hoping that Kyle makes the most of this second chance, and if he doesn't become the next Bears QB he at least has a good audition for a team that will play him.

Second, I wanted to announce that I have decided to expand this blog to do some basketball coverage of the 2007-08 season. I'll try and supplement with a little football news here and there, and maybe some recruiting analysis or our next player arrest when it happens, but I want to do one or two entries on the basketball team each week. This Saturday I may even head over to Conseco Fieldhouse since it is a few blocks from my apartment and watch the Louisville game in person. Because of how much high school basketball I cover each year I don’t get to nearly as many Purdue basketball games as I would like, but I liked what I saw from watching the Clemson game so I’ll keep things running on a reduced level through at least March. At that point I will probably take a bit of a break until June when I can start working on previews for next football season. There may be an entry or two regarding the spring game or, if by some miracle, the baseball team makes the NCAA tournament. Since I follow Miami for college baseball much closer than I do Purdue I could do some ‘Canes stuff at that time as well.

Third, there is still no word on my media credential application for the Motor City Bowl. I will wait patiently to see if the populace will be entertained live from Detroit for the greatest rematch in sports history since Tyson-Holyfield II, or if I will just have to watch from my couch again.

So that is the plan for Off the Tracks over the next few months. There may be a few more tweaks to the design of the site as well, so stay tuned.

I also wanted to take some time to thank everyone who has stopped by to read this season and those that have taken the time to comment. When I started this I had no idea that I would get even the modest audience I had in the first year, but since I joined the Big Ten bloggers’ network my readership has exploded. You guys make this worthwhile and drive much of what I do here. It’s a thrill to know that people are out there reading and actually like my opinions on something I’m probably a little too obsessive about. Thank you for stopping by!