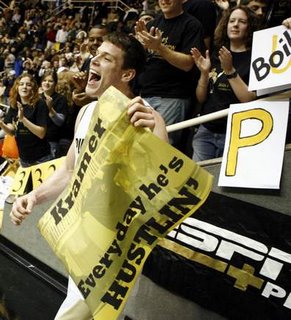 Perhaps I was a tad premature in promoting the Baby Boilers to Toddler Boilers. Because of the Motor City Bowl and the fact I haven’t been able to actually watch a Purdue basketball game since attending the Wooden Tradition here in Indy I haven’t written much about the basketball team. Now that football season is done until September I can turn my full attention to the hardwood, or at least as much as possible gleaned from highlight shows and ESPN box scores.

After the big win in the Wooden tradition the Boilers took a couple of steps back in the Las Vegas Classic, and their stage fright at home is something they will need to get over in a hurry. As a senior-lead team last year Purdue lost just one game in Mackey Arena, to Ohio State. Considering that the Buckeyes finished as national runner-up and featured a few guys that are making some phat cash this year there is no shame in that. Should Purdue repeat that feat this season they will go to the NCAA tournament with some impressive wins over Wisconsin, Michigan State, and Ohio State, but the lone loss carries a lot less luster in Wofford.

First of all, the Terriers, one of the wussiest mascots out there. At least Southern Illinois as the Salukis are a regal, noble type of dog. The only thing I fear from a Terrier is that it may pee on my foot. Secondly Wofford plays in the Southern Conference. That conference has some quality teams with Davidson, College of Charleston, and Appalachian State, but they don’t exactly break down the door when it comes to the NCAA tournament. Occasionally they sneak a second team in, but they are usually just one very difficult out in the first round. Third, Wofford is one of the teams that, to my knowledge at least, has never made the tournament since joining Division 1 in the mid-90’s. I would feel better had the Terriers held on at Alabma to win round one of the Vegas tourney and walk away with a surprise championship in the pseudo-tournament, but they didn’t.

Since Wofford is our one horribly bad loss we had better hope they go on to have a good year in the SoCon. So far they are 7-4 with losses to Alabama, Wisconsin, and Arkansas, but the fourth loss, to Elon College, doesn’t exactly inspire fear in the hearts of men. We overcame bad losses to Minnesota and Indiana State to make the tournament last season, but we have our work cut out for us this year. The sad truth is that the Wofford and Iowa State losses probably erased any goodwill we gained from the Louisville win, and we must cheer hard for Louisville to have a great season from here to get as much mileage out of it as possible.

Truthfully, as young as this team is we should be thankful that we walk into the conference season at 9-4. Considering the 2004-05 and 05-06 seasons netted 7 and 9 wins respectively with much more experienced rosters we’re already further down the road than we have been before. We will turn over the calendar with hope of making the NCAA tournament, which is what you always want.
Obviously the Louisville win is the quality win we will hang our hat on. The four losses aren’t too bad in retrospect. Clemson is a probable NCAA team and I am more frustrated we let one slip away than anything. Missouri is a possible NCAA team, but the same is true in that we let one get away. Wofford at least has a winning record and may sneak into the NCAA’s by winning the SoCon. Iowa State is a major conference team, so it is not too bad, but it would have still been nice to get that game.

Other wins that may have some mileage are Missouri State, who is always tough in the Valley, Lipscomb, and Bethune-Cookman. The last two are a pair of teams that are entering their conference seasons at or near .500. The better they do in those weaker conferences will help us, and should they win auto-bid our wins over them will gain even more merit. Indiana State could be a surprise as well, as they don’t have a horrible loss and play in the always tough Valley. The better that Clemson and Missouri do, since they were true-road losses, will help as well.

In the end I think only the Wofford loss will hurt us, as it is still a home loss to a low-major opponent. Not only is it a "bad loss", but it means we must get at least 11 wins in conference play to get to the magic number of 20. Of course, this could be a blessing in disguise, as 11 conference wins would look much better than 10 anyway.

To me this season is all about just getting to the NCAA’s, as that would be a major step forward for our freshmen. That means we must win at least 11 conference game before the Big Ten Tournament here in Indy. I say 11 wins because that makes anything done in Indianapolis gravy as opposed to being absolutely critical. It also makes us tougher by winning at least three games on the road. As bad as we have played at home I am not expecting to run the table through all nine conference home games. Since the selection committee values road wins over home wins the more we grab on the road the better.

Four teams have been underwhelming at best, and they happen to be four teams that Purdue plays both home and away. If Purdue going to make the NCAA tournament they must win at least seven of those eight games. That is a very reasonable goal and one that, if not achieved, means we probably shouldn’t go dancing anyway. Those four teams are Michigan, Northwestern, Iowa, and Penn State.

That leaves 10 games to get four wins. I feel we are fairly evenly matched with teams like Illinois, and Minnesota. We only get Minnesota once, and that is in Mackey Arena. This will be one of the most critical games for us since we don’t get a second chance against them. If we can split with Illinois and beat Minnesota at home we are looking at getting two wins in the remaining seven games against Wisconsin, Indiana, Michigan State, and Ohio State. To me, an Ohio State split would be the easiest, but getting one in the next five would be difficult. Obviously a win in the five games between Wisconsin, Michigan State, and Indiana would carry a lot of weight as well, making it even more important we get one.

So that is my formula for getting Purdue to the NCAA tournament. When you think about it, it’s not really all that unreasonable and it gives us a good number of quality wins to get an at-large bid. I think we can throw out pulling off a win in Assembly Hall, but who knows. We’ll know more when we face Michigan next week in Mackey Arena.

(1) Michigan State – Playing as well as anyone in the country
(2) Indiana – Same as Michigan State, though the non-conference sked was weaker
(3) Wisconsin – Very impressive win at Texas
(6) Ohio State – I liked the Florida win. We’ll know more with the opener at Illinois
(7) Minnesota – They’ve beaten everyone they should have, more than anyone below them
(5) Illinois – Stuck in the middle with Purdue
(4) Purdue – I really hope the Wofford loss doesn’t bite us.
(8) Penn State – Will open with key game against Northwestern
(10) Northwestern – Someone please call them and tell them they have a game this week
(9) Iowa – I am not confident in them at all
(11) Michigan – Again, they lost to Harvard, coached by the guy that couldn’t win when he coached Michigan!

Falling behind 16-0 to a team like Florida International at home is not something we want get in the habit of doing. To have a successful season we must simply get over our stage fright at home and learn how to close teams out on the road. If we take to heart the lessons learned from the Louisville game we will do fine.