Off the Tracks Basketball debut

Share All sharing options for: Off the Tracks Basketball debut 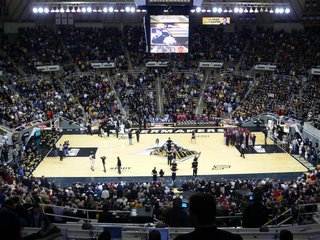 As a fan at the bucket game in 2003 told me, "after today, the ball changes shape." At the time Purdue was riding high at 9-3 football-wise and on their way to the Capitol One Bowl, while Indiana was putting the finishing touches on an especially bad 2-10 campaign that only saw wins over Illinois and the football power that is Indiana State. The two schools could not have been any further apart football-wise, yet Indiana played a deflated Purdue team to a 24-16 game in Bloomington that day. The phrase uttered by the optimistic fan was clear, "you may still own us in football, but in basketball it is a different story."

Basketball has always carried more weight in this state than football. Who can forget the epic duels that Gene Keady and Bob Knight granted us with twice a season for two decades? At the time Purdue was mired, much like Indiana in football, in one of the worst stretches in program history. It is a period from which the Boilers are only just now beginning to recover, and since the football team is fading many Boilermaker fans are flocking back to Mackey Arena to support a young, but improving team.

As a result the rivalry between Indiana and Purdue is becoming a rivalry again after a few lean years. Sure, they have Eric Gordon, but we have our four fabulous freshmen who will likely be around longer than a year. They have a chance for one or two really good years with Gordon, but we're building for the long haul with the baby Boilers. The fact both teams are even talking about future Big Ten titles and deep tournament runs at the same time is a positive sign, and those signs are much needed on the men's side of the basketball ledger at Purdue after the last few years.

I am a realist in that we have a lot of work to do before we are on the same levels as Indiana in basketball. While they have progressed and we have regressed to the point we're nearly equal in football in terms of a national perception, in basketball they are far ahead of us. Until we win five national championships we won't even be close to them. Yes we own a comfortable lead in the overall series, but programs are measured nationally by championships and we don't even come close to them. Fortunately my delusion for Purdue sports is carrying over to basketball in this regard, because I firmly believe that this team is laying the foundation for a potential National Championship before the group leaves in 2011.

The key word here is potential. Obviously with the way they closed the Missouri and Clemson games they won't get it done this year. The key though to nearly every national champion in recent seasons is teamwork and experience. By 2010 the four freshmen will be juniors with tons of experience, a solid underclass most likely supporting them, and a senior leader in Chris Kramer leading them. 2010 might just be the year we finally make the score 5-1 against Indiana and have a little respect of our own in the rivalry.

I can't draw an honest conclusion here because I have only been able to watch the Clemson game and listen to the Missouri game on the radio, but I am encouraged by what I have seen so far. Against Clemson we probably would have been able to close things out if Kramer had not gotten hurt. Indeed on the very play he got injured we would have had two more points plus his services for the rest of the half if he had simply decided to lay the ball in instead of dunk it.

Scott Martin was very aggressive in this game and was key to keeping us in it early. I was also very impressed by the effort of Nemanja Calasan. Once he gets used to the Big Ten style of basketball he will prove to be a very useful asset as he is honestly our biggest presence inside so far. His finesse game near the rim against the Tigers was huge, but unfortunately he was almost invisible against Missouri. Until JuJuan Johnson gains some serious muscle we are going to need Calasan to play big. He's like a much better version of Ivan Kartelo.

Other than the two games mentioned above we have not played anyone of note, and we have been able to pull off five wins as expected. Sure we may have struggled a bit against Ball State, Indiana State, and Lipscomb, but a win is a win. When you're giving four freshmen a ton of playing time in the first four games of their collegiate careers and they still manage to pull off the win it is a positive in my book.

The measure of success for this season will be how we handle the next five games. Because of the issues Louisville has at the moment we have a great shot at beating them Saturday. That's a quality win that will pay dividends on selection Sunday. Next we have the Vegas tournament with a pair of home games before facing Iowa State and probably Alabama in Vegas. That's two more chances for wins over major conference opponents. Thus far it's not like we've lost to anyone that will damage our tournament placement. Should we win four of our next five, a very reasonable goal, we will most likely head into tournament play at 10-3. That sets the stage for a 10-8 conference finish (again, very reasonable) and NCAA bid at 20-11 (plus or minus Big Ten Tournament results)

Where will those Big Ten wins come from? Northwestern and Michigan look terrible thus far, so that is four of them. Iowa doesn't look much better so that can be two more, and suddenly we need to just get four wins out of 12 other games. If we can't do that we don't deserve to go dancing anyway. Since we would have six of those twelve at home I am fully confident we can get at least three more wins at home and scrounge out an extra victory or two on the road. In Big Ten play any team should set a goal of winning at least seven of nine games and four of nine on the road. That's the recipe for getting into the tournament because it would be hard to keep out an 11-7 Big Ten team. Once you reach that point you're playing for a seed instead of a spot.


What needs to improve:

Let's close some games out for once! Twice we've gone on the road and had a lead late, and twice we've been outplayed in the final minutes. Against Clemson we won 7/8ths of the game, but not the critical final eighth. Against Missouri we simply collapsed when it mattered most and didn't continue attack the basket like we did in building our lead. This must stop as we have to learn the killer instinct to step on a team's throat and finish the job, home or away.

Calm down there, ace. We need him to play more in control. His ill-advised dunk against Clemson showed me that he tends to play a lot like I do: way out of control at times. I love his hustle, but if he can find a way to tone it down just a hair and play in control he will be fine.

I like seeing him come off the bench because of the change of pace he offers. He can provide offense when necessary and may be the best at creating his own shot. He's playing his exact role right now and thriving in it, which means his drunk driving suspension/redshirt is a blessing in disguise (basketball-wise) because otherwise he wouldn't be here.

Consistent scoring. You can just feel he has a 35 point game coming from him soon where he just can't miss. One of these days he is going to go off and the entire team will get better in an instant.

I am hoping that when he is not in class or at practice he is either in the weight room or eating, because he seriously needs some bulk on him. I remember seeing Greg Oden play as a freshman in high school and he was about as thin if not thinner than JuJuan. If he can bulk up he could be the best force inside we've ever had. Please JuJuan, don't go the way of Matt ten Dam and John Allison as tall "projects".

Play like you did against Clemson for God's sake! If he can stay out of foul trouble he is our best inside presence and is a powerful rebounder. I love his intensity.

I know these guys went to high school together, but cripes are they twins or something? Martin has been a big surprise as a consistent scorer, and if he keeps it up once Moore, Calasan/Johnson, and Kramer start pouring it in our numbers will jump. Hummel does a little bit of everything, and I often confuse him with Martin on the court.

Keep giving us quality minutes, do the little things, and score when you can. These two guys are kind of forgotten as they don't really have the leadership expectations of Kramer and Crump, but they aren't as highly touted as the freshmen. I like that. If I forget them then other teams may forget them to the tune of 10-15 points per game which is fine with me.

Much like Moore, sometime this year Bobby Buckets is going to come in and just light a team up. I pray it is February 19th in Bloomington.

Last we come to the two forgotten newcomers. Obviously anything we get from these guys in an actual game will likely come once the outcome is already decided. They are big guys though that should provide some interesting challenges in practice for the other guys. Hopefully they can do just that, while improving to get some more serious minutes next year when we will have one of the deepest, most experienced teams in school history.

Next Game vs. Louisville

I don't care if they are missing their two best players. Louisville is still a ranked team and is well coached. They will be ready and if we don't win there will be rumblings about how we can't beat a ranked team even when it is missing key guys. We need to take the next step and beat this team in a pseudo-home game.