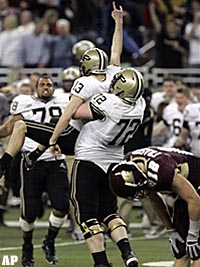 I will not take the road of a Notre Dame fan. That is what I think many Purdue fans are becoming by thinking certain teams are beneath us, and the fact we have close games with them means we are some horrible team. In viewing the Purdue boards last night you would have thought we lost another bowl game rather than won one. Sure, it’s not a glamorous win, and yes, it was probably closer than it should have been, but a bowl win is a bowl win.

Central Michigan is a good football team that has won 18 games in the past two years, which is two more than our total in that time. They have a very, very good quarterback who came up one rushing touchdown short of matching a feat that only one other person, this year’s Heisman winner, has accomplished in the history of college football.

As much as Purdue has struggled recently shouldn’t we at least be marginally pleased that we came through when it mattered most for once? Shouldn’t we be happy the offense delivered with a clutch drive and answered with less than two minutes to go after the defense blew yet another lead? Shouldn’t we be happy for a kid who couldn’t be trusted to make a 19 yard field goal last year with time still on the clock who just nailed a 40-yard winner with no time left? Do we have a right to feel elitist as fans when we have a team that hadn’t won a bowl game in five years and hasn’t even played in a decent bowl game in four?

I, for one, plan on taking this win for what it is worth: it is a bowl win over a good team, but we still have a lot we need to work on unless we want to settle on Detroit as a destination each year. To me every win over a team with a winning record, be they from the MAC or the Big Ten, is a step forward from the way things have been. Central Michigan is very well coached and obviously has a very talented quarterback, so why should we be shocked that they didn’t give up? We have a lot of positives we can take from this game, but there were also some glaring things that we need to work on as well.

Off the Tracks Game MVP:

Jake Standeford – I’d like to think of this as kind of a lifetime achievement award, but Jake saved his best ever game as a Boilermaker for his last. 8 catches, 112 yards and a TD from a guy that was only on the roster originally because of his record-setting brother. It is also appropriate that his last catch made the game-winning field goal more manageable, and he had the presence of mind to get out of bounds rather than fight for more yards. He was a better possession receiver than the highly-touted Bryant and was more of a go-to guy in the second half than him. If anyone has any sense they will hire this guy as a graduate assistant for next year because his attitude needs to be spread to every single receiver on the team. He does all the little things well, and Jake will be missed.

Dorien Bryant – I appreciate the numbers that Dorien has put up in his career, but I certainly will not miss his dropped pass for an interception special that made not one, but two encore appearances last night. Dorien is certainly talented, but the bad that he has had in his career has probably cost us just about as much as the good he has produced. The top receiver on the team shouldn’t drop every key pass thrown his way, or fumble in critical situations like the Michigan State game and (almost) at the goal line last night. His propensity to disappear in big games will not be missed either.

Curtis Painter – Were his struggles in the final three games a result of his shoulder injury? Maybe against Indiana and Penn State, but it certainly didn’t matter as badly as the defense was against Michigan State. I don’t count last night’s interceptions against him, as if they had been the catches they should have been we would have won going away and he would have moved up a few places more on the "most passing yards in a bowl game" list. Last night was the performance we’ve been waiting for from Curtis, and the way he engineered the final drive, even against a terrible defense, is promising.

Keyon Brown – Hello pass rush! 2.5 sacks from a defensive end is much more like the Purdue defense of old. Even when we had Anthony Spencer last year we didn’t have as good of a pass rush as last night, and Brown was the star. I really, really hope Keyon keeps it together and has a big 2008 because we’re going to need him with the experience we’ll be facing at quarterback.

Chris Summers -Where are the detractors now? As mentioned earlier, we couldn’t trust him to hit a 19 yard winner last year, and now he goes out and nails a 40-yarder with no time left to win a bowl game. Chris also hit on a pair of other field goals from tough angles, and continues to set school’s the consecutive PAT’s record by bumping his streak to 97. PAT’s may not look like much, but when they are such an afterthought that they are considered automatic that is what you want out of a kicker. By the way, the NCAA record is 229 consecutive PAT’s and counting by current Texas Tech senior kicker Alex Trilica. Trilica has never missed a PAT, while Summers missed his 6th ever attempt in last year’s Indiana State game and hasn’t missed since.

Greg Orton – We will need big things from him next year, as he will clearly be the most experienced receiver returning. Number two will a talented individual like Desmond Tardy who doesn’t have a ton of a game experience. The Orton of last night is the Orton that has been missing for a few weeks. It is also the Orton we will need next year.

Dustin Keller – Another senior that saved one of his best performances for last. Dustin was unstoppable last night and had several big catches that kept drives going. Dustin continued to be a match up problem that we are going to miss next year. He could not be brought down by just one guy and often it took half the Central defense to stop him. Few people remember his first ever Purdue catch was a 47 yard touchdown against Syracuse, so it is appropriate he was the leading receiver in his final game. I cannot wait until next year when some NFL team becomes very pleased after drafting him in the middle rounds.

Defense – It is time for Brock Spack to go. Yes we gave 17 points as a direct result of dumb turnovers, but that’s still 31 points, often uncontested, by an offense that our first string defense completely frustrated the first time around. The pass defense was especially bad, as Bryan Anderson followed in the footsteps of many other unknown receivers by having a career day against us. He had 17 catches for 230 yards and 3 TD’s in both games against us, and is poised for more next year. He had the best yearly totals of the receivers that lit us up this year, but consider some other guys that had wonderful days against us:

Those are too many guys that had a disproportionate number of catches and/or yards against us compared to the rest of their season. I thought the secondary had grown up recently, but since the Penn State game they have really taken a step back. McKinley gained some valuable experience, and getting both Williams and Irwin healthy will help greatly, but Vinson got abused last night after dominating most of the season.

Containing running quarterbacks – LeFevour is really, really good. Even considering that we kept him in check the first time around, last night he lit us up. Thank goodness Dennis Dixon is done at Oregon because he would be the first in line of many mobile quarterbacks that will destroy us next season if things don’t change. Right now we face LeFevour again with a chip on his shoulder, an improved Adam Weber at Minnesota, C.J. Bacher in an offense that needs a mobile quarterback at Northwestern, a mystery QB at Michigan who will be in a spread-oriented offense, and Kellen Lewis at Indiana.

Kory Sheets fumbling – Kory is an amazingly talented back, but it is time he learns to hold on to the ball. He stands five TD’s away from tying Alstott’s record, but we still cannot trust him to not fumble in key situations. Since our receivers will be very green next year we need more from the running game (see my next point). That means Kory has to step up and Jaycen Taylor will have to continue to push him.

Our running game – This was pathetic last night, and thank goodness Painter was on. We ran for 223 yards as a team against Central Michigan the first time around, but the same running play over and over and over again netted 41 yards. The numbers are a little better because we got three TD’s on the ground, but those numbers will not cut it next season. We need more imagination than handing the ball off up the middle from the shotgun. That play may work every time in NCAA Football ’08, but that’s because they made Kory Sheets a demigod that never fumbles.

Turnovers vs. Central Michigan – This is going to be a big game next year because they will be much more experienced and looking to gather a big win early in the season. They are good team, and they very well could be top 25-worthy next year with just a little bit of defense. We gave them eight turnovers in both games combined and collected just three in return. Curtis Painter limited his interceptions this year, and a number of them weren’t his fault, but the fumbles were a different story.

It is a good win, and I won’t trade it for anything because I did see a lot of positives. Some young players on the defense really stepped up and showed flashes of promise aside from Keyon Brown. Josh McKinley had five tackles and a sack on a nice blitz. Anthony Heygood had 10 tackles and will be better. Ryan Kerrigan got into the backfield and the defensive line had an alright game. They really only got burned because LeFevour is great at avoiding contact and earned all of his yards. They stopped Central cold early on and allowed us to build a lead that ended up being very necessary.

Offensively I am encouraged and feel like Painter took a big step forward last night. He will still need to prove it in a big game against a good opponent, and will get the chance early next year against Oregon in game two. If we can give him more of a running game, which I honestly feel will come from better play calling more than anything; he will be just fine next year.
All in all we showed enough promise to give a little hope for next year, but it obvious that we will not automatically get better. It is up to the players returning to decide what they want to do next year, and should we go 4-0 against our non-conference schedule it will look much, much better than this year’s 4-0.