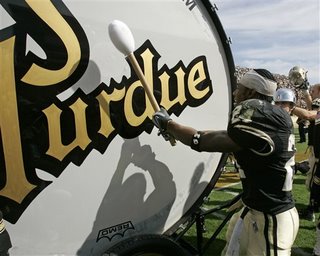 It is Joe Tiller's birthday, so it is appropriate that on this "date which will live in infamy" we view the bowl opponent that will live in infamy; the Central Michigan Chippewas. The 2007 season is somewhat like the Pearl Harbor attack in that we knew something bad was brewing, but we never expected the season to collapse so suddenly in the final three games. Now we have the entire program smoldering like the USS Arizona and the fans are wondering how things can be fixed. Therefore, we must think of the Central Michigan game in the Motor City Bowl as the Doolittle Raid that occurred a few months after Pearl Harbor. On the surface the attack did not accomplish a whole lot, but it was the first step in the ultimate victory for the U.S. over Japan. A loss to the Chips would simply be the biggest setback the program has faced since the Colletto era.

The Motor City Bowl will be the first time in the program's history that that Purdue has not faced a major conference team in a bowl game, and if Tiller has done anything in his tenure he has proven that he can beat teams from non-BCS conferences. He has a 19-3 record against non-BCS foes, with the only losses coming to Toledo in 1997, Bowling Green in 2003, and Hawaii in 2006. What is the common denominator of these three? They were all ranked teams in the season that we played them, furthering proof he can't beat ranked teams. When you take those away we have very few games that were even close, with Miami (OH) in 2006 and Rice in 1998 being the closest. Central Michigan didn't even receive a single vote in any football poll this season, so the odds are in our favor.

We all know what happened on September 15th, and quite frankly anything short of a repeat performance will be disappointing. We had our most dominant half of football on the season against Central Michigan, building a 31-0 halftime lead and preventing a good offensive team from doing much of anything. We then pushed the lead to 38-0 before turning on the cruise control and coasting to a 45-22 win. This is what we must do in Detroit. It's sad this that this game was one of the few times this season we totally dominated a team and put them away early.

Once the Chippewas got into MAC play they had a pretty good season, going 7-1 against conference opponents. The only loss to a MAC team came in a 48-45 shootout against Eastern Michigan. The Eagles aren't exactly the New England Patriots in terms of offense, so once again we should be able to what we want when we want to offensively.

When the Chippewas played outside the MAC the results weren't nearly so good. They went 1-4 with the only win coming against Army 47-23. The other four games were blowouts. 52-7 against Kansas, 45-22 against Purdue, 44-14 to 1-AA North Dakota State, and 70-14 against Clemson were results that don't exactly inspire confidence when playing someone else.

The only common opponent we have with the Chippewas, outside of our own game with them of course, is Toledo whom they pounded 52-31 just a week after we faced the Rockets.

Central Michigan knows how to score points. The Chippewas rank 26th nationally at 33.8 points per game, just ahead of our own 32.9 per game clip. They average more than 450 yards per game (ranked 21st) and that is fairly evenly balanced between the run and the pass. Most of this balance comes in the form of quarterback Dan LeFevour. He's a bit of a poor man's Tim Tebow, as he has thrown for 3,360 yards and 23 touchdowns and has run for 1008 yards and 17 scores. Since Tebow was college football's first ever 20/20 touchdown man this season it's not outside the realm of possiblilty that Lefevour could join him with a good Motor City bowl performance. He is also only a sophomore like Tebow, and will be better this time around. Against us the first time he threw for 364 yards and two scores while running for only 26, but most of that came with the Boilers already holding a big lead.

His top receiver is Bryan Anderson, who had 10 catches for 101 yards against us and has 83 grabs for 1003 yards and seven scores on the year. Antonio Brown also contributes to the passing game with 98 catches, 909 yards, and five scores. He had nine catches for 96 yards against us. Central Michigan has had 10 different players catch touchdown passes this year, so almost anyone can contribute.

Outside of LeFevour the running game is not particularly dangerous as Justin Hoskins is the next leading rusher with 649 yards and 10 scores. Central Michigan only ran for 101 yards against us the first time around, and 41 of those came from #3 rusher Ontario Sneed. Sneed had 484 yards and six scores on the year, but his production continued to drop after a 1,000 yard year in 2005 and 700 in 2006. It should be noted that Sneed did miss three games in the middle of the season.

The Chippewas' M.O. is to spread the ball around as much as possible, and they succeeded in doing that the first time around with nine different receivers and six different rushers getting involved. In order to repeat our earlier victory it will be imperative for us for us to not let their offense get rolling in the first half.

The way that some teams blew through this unit the proper term might be, "What defense?" As seen above, the Chippewas were unable to hold a non-MAC opponent not named Army under 44 points this year. Against the MAC they weren't much better, giving up over 30 points in six of eight games. The only teams that struggled to score against Central were Army, Northern Illinois, and Miami (OH), and they each finished 3-9, 2-10, and 6-7 respectively. That's 10 of 13 games this year in which Central Michigan gave up 30 points or more.

Central Michigan can cause turnovers, forcing 27 this year led by Josh Gordy with four interceptions, but it's not like they have been able to stop anyone. Red Keith was a tackling machine with 139 stops on the year from his linebacker position, adding two picks and two fumble recoveries to his repertoire. Ike Brown also reached triple digits in tackles with exactly 100 stops.

That's really it for the defense, as you can't expect there to be a ton of standouts on a unit that would struggle to stop the French Army. We've already proven we can start hot against this team, so any kind of first half struggles would be a huge disappointment. I will say it now: If we make it out of the first quarter still having not scored in the opening quarter of a bowl game since Tampa we will lose this game.

We have a solid advantage here with Chris Summers over placekicker Andrew Aguila. Aguila has missed four extra points this year while Summers is perfect on PAT's and Aguila has connected on just 7 of 12 field goals. He has made a 51-yarder, but is just 2 of 6 from beyond 30 yards. Central Michigan is usually a team that is end zone or bust on drives, so if we can keep them outside of the red zone we stand a good chance of stopping them from scoring.

Tony Mikulec only has a 37.5 yard punting average, so there isn't a big leg there. Antonio Brown is a decent kick returner averaging 11.4 yards on punt returns and 27.7 on kick returns. He also had a 90 yard kick return for a touchdown and a 58 yarder against us, but Bryant and Tardy are better weapons.

The kicking game will be a huge advantage if the defense can simply keep them out of the end zone. We can score from farther out than they can because of the improvement in Chris Summers. Jared Armstrong will need to get over his case of the shanks as well.

While we should have huge advantages in terms of talent Central Michigan has a gigantic advantage in this area. Quite simply they have a whole lot more to play for than we do. We have an entire fan base that is demoralized, as well as players openly saying we should have declined this bowl invitation. We've already proven we can beat this team, so it won't even count as a good win if we finally break our bowl losing streak. The only thing we can salvage is embarrassment from losing to a team we defeated by 23 points just three months ago.

Central Michigan, however, is fired up to get another shot at a BCS conference opponent. They've already played in big games (two MAC title games and last year's Motor City bowl) at Ford Field and won them all. This is like a second home for them at this point. A win would also give them a nice springboard into next year, something we can't boast about.

Let's face it: for a team from the MAC they use any victory over a Big Ten team, no matter how bad that Big Ten team is, as a measuring stick. That's part of the reason they agreed to this bowl matchup that always sends the best from the MAC against the worst bowl team from the Big Ten. A win for Central Michigan would give them a ton of confidence to beat us next year when they receive most everyone back.

This will be a game won in the first quarter. We cannot afford to have another slow start to a bowl game, but coming out hot would be a stunning reversal of our past performances. If not for a slow start we would have had wins against Arizona State (2004), Georgia (2003), Washington State (2001), and possibly Washington in the Rose Bowl. The more we let Central hang around the more confidence they will gain. They're already itching to kick around a team that kicked them around, so we cannot give them any fire.

I have been preaching this all year but no one will listen. The key for us will be the running game. Kory Sheets has his best game on the ground this season against Central with 144 yards and two touchdowns. He also caught four balls out of the backfield for 19 more yards. Jaycen Taylor went for 28 yards and a score before breaking his arm in the game. We more than doubled their yardage on the ground, and if we can contain LeFevour's running ability we should be fine.

A lot will depend on our attitude and leadership. If leaders like Keller, Avril, and Bick decide that the finish was embarrassing enough and want to go out with a bang we should be able to dominate like we did in September. If Dorien Bryant's piss-poor attitude prevails however we will lose. This is a highly important game because more than ever it sets the tone for next year. A win at least stops the bleeding and temporarily reverses the trend started at the end of the season. A loss means we could easily go 1-3 out of conference next year and the season would be over before it started.

Maybe I am delusional, but I still believe. I think that we can for once rise up to the challenge and pull this off. I have zero confidence in Central Michigan's ability to stop us, as they haven't stopped anyone all season who didn't shoot themselves in the foot. That will be the only way we should lose this game. Unfortunately we have shown of late that we are more than capable of doing so. Purdue 45, Central Michigan 30