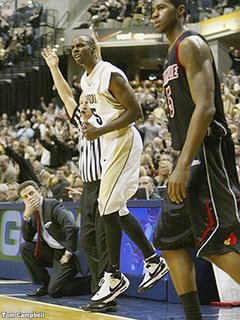 I think there is a reason that people from Indiana love the game of basketball so much. Saturday afternoon in Indianapolis was dreary, as the sky couldn’t decide exactly what type of precipitation it wanted to yield. Since this is often the case from December through early March in Indiana (trust, I’ve lived here for 28 years) people just naturally flock to the warmest venue they can find for entertainment. Often that is the local basketball gym, where you can warm yourself up by screaming yourself hoarse.

As a result of my assigned high school game being postponed my wife and I decided to venture a few blocks south of our place to see the Baby Boilers take on Louisville in the Wooden tradition. Though the Cardinals were heavily depleted by injuries and suspensions, they are still a good team that has a 500-win (eventually), national champion coach. They were still ranked 22nd in the nation, and they had enough of a crowd with them to make it feel like a road game.

I am proud to say that our Baby Boilers grew up a bit Saturday, and now I jokingly call them the Toddler Boilers. Robbie Hummel mentioned that it was a positive that they learned from the Clemson and Missouri losses by preventing the Louisville game from turning second half collapse. They now have a name win that, come March, the selection committee will forget came against a depleted roster.

Keaton Grant – I think I should refer to him as Big Shot Keaton Grant. Much like I mentioned in the previous posting, both he and Marcus Green are slightly forgotten because of all the attention paid to the freshmen, Calasan, and Kramer. As a result they are often free for a couple of big baskets, and none were bigger than the four three he hit yesterday. E’Twaun Moore had an off day scoring, but Grant stepped up. Three of these came in the first half as we built a lead, and his fourth bumped a six point lead to a nine point lead during a key stretch. If he can keep up his outside shooting I’ll certainly take it as we don’t really have a dedicated 3-point artist.

Chris Kramer (second half edition) – Welcome back from the concussion, son. Kramer came off the bench since we started the four freshmen, but he still filled the stat sheet with significant numbers in four categories. He seemed to be everywhere in the second half, by either hitting a shot, getting a steal, getting a rebound, or simply controlling the tempo in the half court.
Robbie Hummel – Hummel seemed to be quite a fighter yesterday, as he was doing the dirty work to get to the foul line. He also seemed to be a calming influence with the ball when Louisville was pressing during its big run. It’s very nice to see that he was never shaken in what was only his eighth collegiate game.

Breaking the press – I only noticed a couple of possessions where the Louisville press was really disrupted. We had one 10-second violation and one shot clock violation. Considering the heat Louisville was bringing in the second half and our youth that’s pretty impressive. This is another lesson learned from the Missouri game, and it will pay dividends in the Big Ten.

Our post presence – We were facing a bigger team with only Calasan and Johnson in the post. They combined for just 4 points and seven rebounds. That means everyone else stepped up and battled inside. Johnson played very smart when he was in there, only getting one foul and five big defensive boards. I would like to have had more from Calasan, but a win is a win.

Free throw shooting – We did a decent job of hitting these down the stretch, but if things had been closer it could have gotten a little dicey. It’s nitpicking, but I am of the school that you should shoot at least 75% from the line in each game. Each missed free throw makes me cringe because it is giving up free points.

3-point defense – Thankfully Louisville was shooting as cold as the weather outside late. We gave them way too many open looks, especially off of offensive rebounds as well. Their quickness created the need for the defense to collapse down on the drive, and from there it was easy to kick it out to the open man for three. Louisville was able to answer our runs with this early, but didn’t have enough left to do so at the end.

Defensive rebounding – 16 offensive rebounds given up is not going to cut it once we get into Big Ten play. Calasan and Johnson need to get tougher on the glass to limit teams to just one shot per possession. From looking at the stats from Monday’s Texas Southern game they used and overmatched opponent to do just that.

It’s a win over a ranked team away from Mackey Arena. We’ve had three chances to get wins most people were not giving to us before the season started and we finally broke through to get one of them. It’s nice to see it is in the bank, and it is time to cheer hard for Louisville to get healthy and win the Big East so we can get the best mileage out of it.

Already we’ve shown that the win hasn’t gone to our heads as the team went out and dominated a weak Texas Southern team Monday night in the first game of the Las Vegas Classic. The Tigers were never in the game Monday night, which is what should happen when a Big Ten team takes on a SWAC team.

Wednesday night is another mismatch against a team we shouldn’t have too much trouble with in Wofford. We must beware though, as the Terriers gave Alabama a bit of a game tonight before falling by seven. They even led by one at the half. We’re probably the favorite to win this pseudo-tournament, as we get the battle for Martin Jischke’s loyalty Saturday night against Iowa State before facing Alabama or Missouri State in the final. We have the best record with the biggest win of anyone out there, so we need to have a goal of winning the thing. Should we follow that with an expected win over Florida International we’ll be a very comfortable 11-2 going into the conference season.

There was quite a bit of consternation from the Michigan State contingent out there over putting Indiana ahead of the Spartans. Well, Saturday’s impressive win at BYU convinced me. The Spartans have a win over a ranked team and the only loss is to a former number one team. Indiana also beat a ranked team in Southern Illinois, but the Xavier loss is worse than the UCLA loss for Michigan State.

In reality I view the Big Ten at a 2-7-2 perspective right now. Indiana and Michigan State are at the top and national contenders. The middle seven all could get hot and make the tournament. The bottom two of Northwestern and Michigan are simply dreadful.