Where do we go from here?

Share All sharing options for: Where do we go from here? 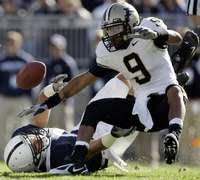 Yesterday was frustrating. We return the opening kickoff for a touchdown on the road, then can't find the end zone the rest of the day. The defense played well, but faded late, allowing over 250 yards rushing after playing so well of late against the run. We didn't get blown out on the road and actually played a good team in a hostile environment to a close game, but we were undone by a series of mistakes and bad calls that really stole a great chance to win. A nine win regular season is still a strong possibility, but even if we get there we could get sent to as low as sixth in the bowl order and not get another chance to beat a good team. We could finish as the weakest 10 win, non-Notre Dame team in college football history.

At least the fact we played a close game with Penn State may help us. By showing we could compete in a back and forth game with a good team may have the bowl scouts actually helping us instead of banishing us to the Insight Bowl on the NFL Network with a 9-3 record. It is a critical lesson we must learn not only for said bowl game, where we will play a good team, but it will come in handy for next year when we have a more difficult schedule. We also get quite a bit back to help the new pieces develop.

So where do we go from here? Is 10 wins still a noble goal? Obviously we must continue to play to beat only who is placed in front of us, and right now that will be Michigan State, Indiana, and likely a middle-tier team from the Big 12 or ACC. With a lot of help we can still make the Outback bowl or even the Capitol one Bowl, but basically the following must happen:


This then allows for the most likely of conference final records:

If Michigan does defeat Ohio State in that scenario would the Capitol One bowl select us as the only other team in the Big Ten with a .500 record or better? How far would we fall with so many 4-4 teams behind us? It does hurt a little that we don't get to play Wisconsin or Illinois in order to have a more accurate view of if we should be ahead of them or not. If the exact scenario above plays out obviously the Capitol One would likely select Penn State ahead of us, and the Outback would then select Wisconsin over us since they "travel well", but I feel confident in getting at least to the Alamo bowl over Illinois and Iowa. It may also help the Big Ten to get nine teams in, as the Motor City bowl could possibly select a nearby and eligible Michigan State team and leave Indiana available for some other bowl. Indiana also could go ahead of Iowa here based on their head-to-head win.

That is why the Penn State loss from yesterday hurts so much. We very easily could have won and all but locked up a New Year's Day bowl game simply by winning the last two games. It was the type of game where we could have survived Jaycen Taylor's fumble at the goal line without the stupid mistakes via dumb penalties. We could have survived the absolutely horrendous officiating if we had not had the previously mentioned mistakes. Take away any one of those and we probably win.

Chris Summers – A year ago he only made eight field goals. This year he has twice made four in a game and kept us in each. He was one of the big reasons we beat Notre Dame, and yesterday he kept us in the game when we couldn't finish off drives. It is puzzling as to why Tiller didn't let him try a 47 yard twice against Iowa at home, but he trotted him out there for a 50 yarder on the road. Ah well, he made it and he's becoming even more reliable each week. Not only is he a fearsome tackler, but he has been one of the biggest positive surprises of the season. It's wonderful to see this and see that his hard work is paying off. He's 13 of 16 on the season with one blocked for sure and the one miss against Northwestern may have been tipped. If it was that means he only has one true miss, his first kick of the season, by less than a foot.

Dorien Bryant – Another kickoff return for a TD and that makes two on the season and three for his career. Not only that, but he was showing some real leadership on the sidelines that will pay off here late in the season. His efforts may not have resulted in a win this week, but if he can stay focused he can torch both Michigan State and Indiana, then hopefully go out with a bang in the bowl game.

Cliff Avril – Another sack and another fumble recovery for the big guy. He's another guy who should have a huge final two games to help us get nine wins. The better the other side of the line plays the more Cliff will be freed up.

Selwyn Lymon – As mentioned above, we will need some experience to come back next year and step up for the pieces will lose. Hopefully this game will be a turning point for Lymon as he will be called on to do more with Bryant gone next season. He also should have had a touchdown if not for a bad call from the officials. If he ever gets his mental capacity in line with the obvious physical tools he has he will be a great compliment to Orton as a possession guy.

The Officiating – Enough has been said about this, but it was terrible. Who knows what will happen as the week goes on with the Big Ten, but hopefully the conference will review the tapes and at least say something about it. There were missed spots and early first downs. There was the call with the clock being wound, and there were some questionable penalties. It is far from the sole reason we lost, but it certainly did not help.

Dumb Penalties – A roughing the kicker penalty gave them three points. We had some personal fouls that kept a few other drives alive that lead to points, and essentially we just did not help our cause out. You can't make mistakes like that on the road and expect to win, and as much experience as we have we shouldn't be making those mistakes. There's nothing wrong with playing hard, but as coach Tiller said, we must play smart.

Taylor's fumble – This was an absolute momentum killer, as a touchdown there would have given us a huge advantage. Instead we gave the ball back after a long drive with no points and everything seemed to go downhill from there. I like Taylor and his effort, but why is Kory Sheets not in there at that moment? He's a proven goal line running back with all the touchdowns in his career, but instead he was on the sideline here.

The Defense – Once again we took a step back, but at least Penn State had been playing better of late offensively. As good as our defense played against Northwestern I certainly thought we would have had a shot with 19 points on the road where we've struggled to score before, but once again we failed to stop the run in a big game. Until we do this we won't be an elite team.

The Red Zone offense – We moved the ball well against a good defense, but we had three drives get inside the 20 and we ended up with six points off of them. Summers nailing field goals from 40+ is great, but if we get inside the 20 we need to come away with touchdowns.

This season is not lost, and I am really tired of the fans that are bashing Tiller. Maybe Ohio State and Michigan are just really, really good teams this year and we would have lost to them regardless of how well we have played. Not many were considering those games as wins anyway, and we're still exactly where many expected us to be right now. If we had lost any one of the games we have won aside from maybe Northwestern or Iowa it would be an extreme disappointment. Instead we have lost one game where we had a chance but made too many mistakes in, a game to the #1 team in the country, and another that was in the preseason top 5 and is finally playing like it. What is the shame in that? It's laughable that Notre Dame fans are mocking our mediocrity when they are 1-8 and extremely lucky to have the one win they do have.

We must now beat both Michigan State and Indiana. We can accomplish both and in doing so we have absolutely nothing to be ashamed of at 9-3. It would have been incredibly nice to have more, and I certainly want to get to that point, but we have progressed much this season. We were finally competitive against a good team in Penn State. We have beaten a couple of teams (Central Michigan and Iowa) that will likely go to bowls. We haven't dropped a single game so far we weren't expected to lose. That is progress in my book and a step forward from last year. Shoot, we have three losses and we're still at least receiving votes in the polls.

We still have a whole lot we can accomplish this year, and 10 wins will be 10 wins regardless of who we play.