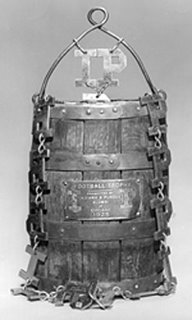 It's bucket week, and that means the final blog trade of the season. This week John from The Hoosier Report takes part in some ruthless questioning with both myself and Boiled Sports. Please welcome John to the mic as he dissect what looks to be the most competitive and entertaining bucket game in years.

OTT: Three of the last four times (2006, 1992, 1989) Indiana has met Purdue needing the Bucket to gain bowl eligibility the Boilers have won. The one time Indiana was successful (1994) was the Hoosiers' last winning season, but they weren't selected for a bowl. What will it take for the Hoosiers to finally break through in this game? How much will the motivation they can possibly steal a bid from the Boilers with identical records and a tiebreaker should they win play into it? How much will be for the bowl bid and how much for the Bucket?

HR: As I noted on the blog, at least by the numbers, this is a fairly even matchup. It should be a high-scoring affair, and I think the most important thing IU can do is limit mistakes and turnovers. Kellen Lewis has become a turnover machine, and while he seems to have improved his focus on sliding and avoiding big hits when he scrambles, he still coughed one up while trying to make something out of nothing on the game-ending play against Northwestern. I don't imagine that stealing a bid from the Boilers has much impact on the team. The team has been focused on its own accomplishments and I imagine will remain that way. No one on this team has won the Bucket or been to a bowl game, so I would imagine both are quite important, but I think going to a bowl has been the main thrust all along.

OTT: 1979 was the only year both Purdue and Indiana have played where both went to a bowl game, although both would have gone in 1967 if there was more than one bowl bid from the Big Ten then. Is it possible for both teams to be good at the same time with the limited in-state talent pool? Will there ever be a year like 1967 when the game decided the Big Ten title?

HR: Anything is possible. Next weekend, Kansas and Missouri will play a game with national championship implications for both teams. As you note, the talent pool is an issue. In basketball, one or two players can turn the tide for a program. A football program needs to sign a bunch of quality players every year. Neither IU nor Purdue will ever succeed recruiting exclusively in Indiana, so I think that both schools can be good at the same time if they can recruit regionally and nationally. The two programs always will fight with each other (and with other Big Ten programs and Notre Dame) for the best players in the state, but it's a big country, and with the right recruiting strategy it could happen again.

OTT: The story of the year has obviously been the Hep factor. I've read your great work on the four tiers of bowl eligibility. How much will this play into the bowl selection process? Does it truly give Indiana an edge even if they finish 6-6 and there are enough spots open nationally?

HR: I do think the Hep factor gives IU an edge. IU never has been known for great football attendance, but given the 14 year drought I would guess that many bowls would take a gamble that IU fans will travel for this one. IU also should provide some nice TV ratings. The Hep factor, the novelty of Indiana in a bowl game, and exciting players like Hardy and Lewis might make IU a better draw than ordinarily would be expected. As for 6-6, I'm not sure how the math is going to work out. It will be close.

OTT: Finally, how big would going to any bowl game be for Indiana? I admit as a Purdue fan I feel like we've been a tad whiny about not being satisfied with 10 bowls in 11 years, all while Indiana has none. What is the perspective of being 7-5 and in a bowl for the first time in 14 years? I'm sure it is quite different from being in 7-5 and feeling like the Motor City bowl is beneath you like some Purdue fans think.

HR: Any bowl game would be big. It's been a long time, and a bowl bid will help IU's program in many ways. Still, I really don't understand why the Big Ten has the Motor City Bowl tie-in. I don't think it's in the interest of a middle-of-the-pack Big Ten program to go to less-than-desirable Detroit and risk losing to the MAC champion. The MAC champion usually is a good team, so there's no shame in it, but there's the perception of shame. I would rather see the Big Ten tied in to the Vegas Bowl or some other warm location. I don't mean to sound ungrateful. I'll take whatever we get, but if IU does win seven, I would just as soon hit the open market.