The bucket is gone.

Share All sharing options for: The bucket is gone. 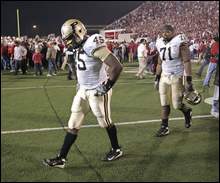 If we were going to lose it, and let’s face it, we’re going to lose it eventually once in awhile, I don’t mind losing it to an inspired Indiana team that simply outplayed us. I have a ton of respect for coach Hep and what he did for that program, so they certainly deserve their victory, the bucket, and a bowl game. They came out and punched us in the mouth, built a big lead early, and played the entire game with more emotion and fire. We were handed most of the breaks on some questionable penalties and even after storming back Indiana had enough to get in position for the winning field goal.

Simply put, Indiana wanted it more, and we only showed we wanted it in the last 20 minutes. In the past that would have been enough against the Hoosiers. These are not the same old Hoosiers. They are becoming a team that you have to play the entire four quarters against. Just ask Iowa, Penn State, Northwestern, and now us. If hardy returns for another year they will likely be even better next season.

This Sunday morning Purdue football and Indiana football find themselves at almost the exact same spot after years of domination by the Boilermakers. The teams have identical records, and their most recent meeting was decided by a last minute deep field goal. Indiana’s 7-5 brings a lot of joy, taking the program to heights it has not seen in 14 years. As Purdue experienced in 1997, when you have a drought that long any bowl is a good bowl. It means you get to continue the season, keep practicing, and build for next season.

Purdue’s 7-5, achieved in almost the exact same way since we were both 4-0 out of conference against similarly weak schedules and had wins over Iowa and Minnesota, is nothing short of a colossal disappointment. Because of the heights we have reached we no longer accept a 7-5 season where we failed to beat any good teams an achievement. One could say this year was slightly better as we have three wins over bowl eligible teams as opposed to just one from last season, but it has been four years since our last win over a ranked team. Big things were expected this year from our offense, but it faltered when we needed it the most. The defense showed improvement in spots, only to fall apart again at the end of the season. Now we have a coaching staff that is in serious trouble despite presiding over the most successful period in the program’s history.

This fact makes it ironic that we just lost to Indiana, as they were in a similar situation at the end of Bill Mallory’s tenure. Mallory is Indiana’s winningest football coach ever with 69 wins. Tiller, assuming he returns next year, will become Purdue’s winningest coach. Mallory coached Indiana to six of their now nine total bowl bids. Assuming Purdue gets selected to a bowl this year, Tiller will have coached Purdue to 10 of their 15 total bowl bids. Tiller immediately took a 3-8 team and had them finish in the top 25 in three out of his first four years. Mallory took Indiana to six bowls in eight years with two top 20 finishes. Both coaches saw their programs decline from those heights at the end, as expectations of more never panned out.

This sounds very familiar, doesn’t it? A similar thing happened with Gene Keady on the basketball side of the ledger. I am not one of the apocalyptic posters on the Purdue message boards that says Tiller must be fired immediately. The work he has done in 11 seasons compared to what was there in decades before is nothing short of incredible. He has taken a program that averaged 3-4 wins per year and turned it into one that averages 7-8 wins per year. He has had us as a regular visitor to the top 25 even this season. He has put us into bowl games year in and year out when such historically strong programs such as Alabama, Penn State, Notre Dame, and Nebraska have been unable to sustain such success recently. This modest success has lead to facility improvements and has at least had us in the discussion nationally well into October instead of being eliminated before the season starts. He’s been far from terrible, and has really done nothing that warrants a sudden firing.

On the other side of the ledger though you cannot argue the numbers against him. Tiller has built his record against the MAC Indiana, Northwestern, Michigan State, Minnesota, and Illinois while struggling against the upper tier of the conference. Against those five teams he is now 39-9, but five of those losses have come in the past three seasons. One could argue we are on the same level as Iowa at the moment, and Tiller is 4-5 having never won in Iowa City. The upper echelon of Penn State, Wisconsin, Michigan, and Ohio State is even worse. We are just 8-23 against those four under Tiller, with only three of those wins (twice at Wisconsin, once at Penn State) away from Ross-Ade Stadium. We haven’t beaten one of these four since 2004.

Let’s look out of conference for a moment. We’re 10-2 against the MAC and 3-0 against 1-AA teams. Against Notre Dame we’re 5-6, but many of those wins have come against bad Notre Dame teams. Against BCS conference foes (regular season only) we’re 5-2, but Arizona, Wake Forest, Cincinnati, and Syracuse aren’t exactly world beaters.

Coach Tiller has become the master of taking advantage of the non-conference schedule, beating the mediocre to bad, and losing to the good. We used to at least be competitive with the top four in the conference, but Only this year’s Penn State game has come close to netting us a win since beating Ohio State in 2004. That is a step back, and with everyone in the conference getting better we cannot afford many steps back before we are back at 3-4 wins per season.

This is not meant to be a full regular season wrap, as I will go into that between now and bowl time, but we are clearly at a crossroads. We are now dead even with our rivals to the south. Yesterday’s atmosphere in Bloomington was the best I have ever seen from a Bucket game, and I would love to see it continue that way because both of us get better from here. It is a long time from now until November 22, 2008. Hopefully we will be ready to get the bucket back.

Getting back to yesterday’s game for a moment there was a particular sequence of plays that stood out to me. Due to the wonderful urban planning and traffic direction by the powers that be in the city of Bloomington Our 1pm departure from Greenwood didn’t allow us to actually get to the game until midway through the first quarter. The first play I got to see was the Justin Scott interception. We got the ball at the Indiana 39 yard line, but were unable to do anything with it. To me this is where the game was lost, because an early score would have put all the pressure on Indiana. Instead we bailed out the Hoosiers, and they built off of the momentum of that stop.

The rest was history and decided by the running game as many football games are. We were unable to get the run going against a team that has been unable to stop anyone from running all season. Conversely, our improved run defense was lit up by one of the worst number 1 running backs in the conference. Marcus Thigpen’s best day this season had been against Western Michigan when he ran for just 81 yards. We allowed him to run for 140 of his 512 yards on the season, mostly on simple delayed handoffs up the middle that we seemed to have no idea were coming. I can understand concentrating on Lewis, but you’d think we would adjust to Thigpen after getting burned two or three times.

The failure to adjust also came through on the game’s biggest play at the end. Facing third and five at the Purdue 45 everyone in the world except our defense and coaching staff knew the pass was going to go to Hardy, and that he would be past the first down marker. There was no attempt at double coverage, and Lewis easily made the same type of completion that Hoyer kept making last week on third down. This even came out of a timeout, one of many ill-advised timeouts down the stretch that only helped Indiana and hurt us.

We showed a lot of heart coming back in such an emotionally charged atmosphere, but if we had played like we are capable of playing we never should have been down by three touchdowns. The way we played down the stretch tells me we easily could have won, but the disturbing trend of getting going only when we have our backs to the wall seems to have returned.

It’s amazing to see just how even these teams were yesterday, and that is why I am excited for the future if both can find a way to improve. They made us pay for a critical turnover (the Orton fumble), and we made them pay for their late fumble. Both teams missed makeable field goals. Both teams had dominant stretches of play where they ran off a bunch of points without answer. We have gotten worse, but Indiana has gotten better.

The bottom line is that we walked into a volatile situation yesterday and still came one play away from getting a stop and potential win. As I write that I thought of how frustrating that was during the 2004 season, and how we have departed from even being that close in losses only to return to it. Indiana gave us everything they could for 60 minutes and we still came back to tie it, despite the emotion they were playing with, and made a game of things. I hope the returning players remember what happened and build on it, because it is the only way we will avoid sliding further back.

Congratulations to the Hoosiers. You deserved yesterday’s win, your bowl game, and the bucket for this year. You have come a long way from the 63-20 thrashing just three years ago, and you have made this a rivalry game again. I am glad you did this for Hep, as I have nothing but respect for what he did at IU and you have done a wonderful job of honoring his memory. Enjoy your bowl game and take care of the Bucket for us, because it is a rivalry again.