I have spent most of this week trying to figure out Purdue’s best-case scenario for bowl positioning. Since everyone short of Minnesota is already eligible each game has an effect on us. In Monday’s recap of last week’s action I outlined our worst scenario, but today I will try to figure out what we need to cheer for on Saturday. Obviously some things are more likely to happen than others. Here is what I have come up with, in order of how critical we need them to happen for our best bowl:

Obviously all of this not going to happen, but it is my hope that the first three happen as they have the most effect. If we beat Indiana that likely sends the Hoosiers home for the holidays. Michigan over Ohio State opens the door for the two BCS scenario that would move everyone up one spot. Penn State over Michigan State assures that even though they beat us, the Spartans could not be selected ahead of us at 6-6. The same is true for Iowa, but I think it is a crock they are even in the discussion about being selected ahead of us even though we could finish a full game ahead of them and have a solid victory against them. The other two games are inconsequential really. Illinois will be selected ahead of us and Wisconsin will be ahead of us unless they lose in such an embarrassing fashion it makes the bowl scouts question them. Say we get the first three to happen, which is well within reason. I see the bowls being handed out as such:

Really the one that kind of gets screwed here is Northwestern, having wins over the other two 6-6 teams, but the Motor City bowl won’t pass up Michigan State and the Indiana story would be too good for another bowl to pass up. Getting both of them to bowls would be easier than getting three homeless teams into games.

As for Purdue, it would suck to go to the same bowl for the second consecutive year, but I’ll take it over the Insight or the Motor City. At least I can watch the Champs bowl on ESPN, the Insight bowl is on NFL network which is in slightly more homes than the Big Ten Network. The Motor City bowl would just suck, as it possibly means another game against Central Michigan. Since we play them next year that would be three times in 13 games, something I sure no one wants.

I tried to see if Michigan and Ohio State played for a trophy like everyone else in the conference this week, but I couldn’t find one. Then it dawned on me: They do play for a trophy. It’s called the Big Ten trophy. They have played 23 times where the winner won the Big Ten conference, so they don’t need some petty minor trophy to trade between them.

Ohio State still has an outside shot at the national title with a ton of help, but Michigan has been looking forward to this game all year. It’s amazing they have a shot at winning the conference with three losses, especially considering how bad they looked at the start of the season. The group of seniors Michigan will send to the NFL is banged up, but you know they are going to play in their home finale.

Being in the clubhouse at 11-1 would be big for the Buckeyes since the six teams ahead of them would still have to play. Remember, only five need to lose, and two are already guaranteed to out of the Oklahoma-Missouri-Kansas trifecta. They are healthier, have more to play for, and are the better all around team, but I think Michigan held back against Wisconsin for a reason last week. They had nothing to gain by playing everyone, and they have nothing to lose this week.

This is one of the closest trophy rivalries in the conference with Illinois holding a 32-28-2 edge. Last year it was a battle for last place in the conference with Northwestern gaining an edge late. This year Illinois is almost certainly going to be playing on New Year’s Day while Northwestern may not go anywhere even if it does win this game. If the situation outlined above happens though, Northwestern would gain an edge with that seventh win giving them a little bit more leverage. Therefore, they will cheer hard for Michigan, Purdue, and Penn State.

Northwestern already lost to Ohio State 58-7, so do they really have a chance to knock off a team that just beat the Buckeyes? Illinois has already come out flat after a couple of big wins this year, losing at Iowa in a game it probably had no business losing. I saw what our ground game did to Northwestern and that is making me shy away from picking the Wildcats.

This game could be a little crazy as Northwestern’s offense has the potential to go off like it did against Minnesota and Michigan State. I am afraid that is what they will need to do, since the defense has struggled against good teams all year. If it becomes a shootout I like Northwestern, if there is defense played my pick is Illinois. 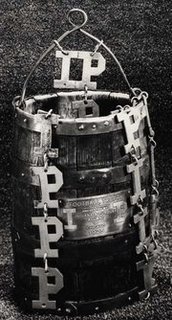 How can one loss mean so much? It’s not like Michigan State is a bad team. They have won six games and have been competitive in each loss. It’s probably because they are likely the best team we were supposed to beat and we were unable to do so. Maybe it was the lousy performance and knowing that we still would have won had we not beaten ourselves. I do know I have a bad taste in my mouth and serious concerns before we play the Hoosiers.

We’ve dominated both the recent series and the overall series. We hold a 54-25-3 edge since the two teams started playing for the bucket, but it’s been a long time since there’s been more than that at stake here. As I said yesterday on the Hoosier report; I am terrified of James Hardy and fear he will break multiple NCAA single game records because we fail to adjust on a hot receiver. If we don’t play up on him, double cover him, bump him at the line, or give him a debilitating but not life-threatening case of explosive diarrhea he will have a career day against us.

I feel like Bill in Kill Bill Vol. 2 facing these Hoosiers trying to warn Budd of impending disaster. I fear we don’t respect them because we’ve owned them for so long. I fear we’re being warned that without the assistance of a game plan solely for Hardy and Lewis we will get beat and beaten badly. I will be in attendance, potentially the last Purdue game I will go to for a long while if we end up moving, so I don’t want to lose.

To quote Han Solo, "I have a bad feeling about this." Indiana has a ton of emotion and we had better be prepared to get everything they have. I know we won’t give everything we have because we didn't last week. 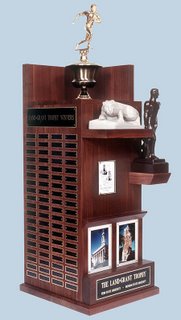 This is the most awkward trophy game in the Big Ten, as it is not created off of geography or history, but because of two wayward teams that are deemed to meet at the end of every season and to make Penn State feel welcome in the Big Ten. Can’t we get Pittsburgh into the conference, make them Penn State’s rival, hype the Michigan State-Wisconsin series as another year-end rivalry, and have Iowa and Minnesota finish against each other? Would that be possible?

Penn State leads this trophy series 11-3 and has won three in a row, but you get the feeling it’s about as nasty of a rivalry as the Purdue-Illinois Cannon series where hte players are barely aware a trophy is played for. Michigan State proved last week that it can win through the air when the ground game is struggling, but Penn State actually has defensive coordinators that watch the game and adjust to how it is being played.

The Nittany Lions really don’t have a ton to play for outside of a New Year’s Day bowl if Michigan beats Ohio State. Even that is not a guarantee, and they will have a good idea of that result by kickoff. Michigan State is playing to get in its first bowl game in quite a while. Playing at home I think they do it. 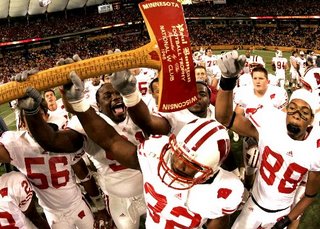 This is it. Minnesota is the only team in the conference that knows their season will come to an end on Saturday, and I am sure they would like to go out guns blazing. It’s a situation where if they have to go down they want to take out their rivals and the Axe with them. This is actually the oldest rivalry in Division 1-A, as the two have played 116 times. Wisconsin leads the trophy portion of the series 32-24-3. There is a history of teams running to the other sideline to grab the axe. They really shouldn’t run with sharp objects like that.

The last time Minnesota won was on a last second field goal, where the kicker hit the winning kick and immediately turned around to run for the axe. If a similar situation happens on Saturday Wisconsin could fall far in the bowl order, but it is unlikely. They have the good win over Michigan, and they bring larger crowds, meaning they are a more likely pick than Purdue if they have even records.

Minnesota simply doesn’t have enough on either side of the ball to hang with a good Badger team. They came close to a win last week, but Wisconsin is a step up on Iowa right now and they will play like it. Minnesota only has a chance if it goes completely nuts offensively. It’s not going to happen.

Iowa already had its rivalry game last week, taking back the pig in a close game against Minnesota. Now the Hawkeyes need this win for bowl positioning, and as stated it is quite a crock to think they could be selected ahead of us at 7-5 if we finish 8-4. Western Michigan can always play for the surprising upset, but aside from Minnesota and Michigan the Big Ten has had little trouble out conference this year.

There is no way Iowa loses this game at home.

#6 West Virginia at #22 Cincinnati – Are the Bearcats really that high? This may be West Virginia’s most difficult game remaining as they hope to sneak into the national championship knowing two teams ahead of them will lose (plus Oregon is losing BIG as I write this). Since they close with a pair of games at home they have a shot. Cincinnati has been surprisingly tough at home. West Virginia 30, Cincinnati 24

#16 Hawaii at Nevada – A ton of people are ripping on the Warriors right now for having a weak schedule. Every team but Kansas has no right to bitch though. Those two teams have done only what they can do, and that is beat everyone put in front of them. The other 118 teams can’t say that and only have themselves to blame for not beings where the Warriors and Jayhawks are. This is the last trip to the mainland for Hawaii before a potential BCS bowl, and a win makes that return trip possible. Other team can complain, but if they really wanted to be where Hawaii is they should have won their games. Hawaii 42, Nevada 41